Amongst the Bahnars in Kon Tum 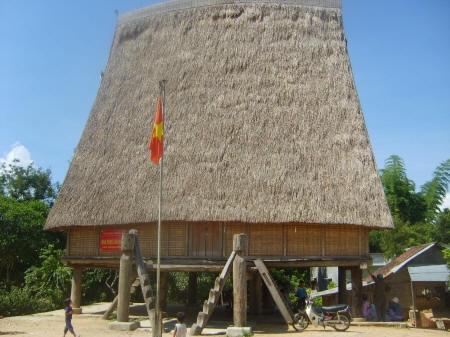 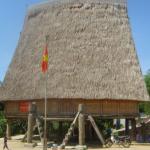 "The ethnic minority people, the Bahnar, Jolong, Rongao and Sirang, are kind and hard working, but we have very little to show," says Kruh, my Bahnar guide for the day. He is dark skinned and tells me that he spent most of his life growing up on a farm. He lost part of his thumb and a toe working in the fields slicing crops at the age of 15.

For the past two years, Kruh has been studying electronics in school the central Vietnamese city of Kon Tum, and his plan is to graduate in 2010. Although he speaks a high level of English and can converse fluently, we discuss not the rapid changing of Vietnamese society, but how the process of "Vietnamization" is having a detrimental effect on his Bahnar people.

Unsure what he is referring to, I become more inquisitive. Kruh obliges by taking me from village to village. He surveys the area and directs my eyes to the contrasting abodes as we pass through the villages.

"You see the housing in the villages? They are not traditional huts. Many of them are made of bricks nowadays. We are being encouraged by the authorities to modernize. They (the authorities) claim that they care about our heritage. But it seems that tourists' needs are important to them."

Taking a look around the villages where the Bahnar people live, as well as other minorities who converse in a tribal language and not Vietnamese, only rongs or communal houses that have high ceilings retain a distinguishable traditional form.

"We say the higher the roof, the stronger the village," Kruh tells me.

Inside the rongs are coal fireplaces and photos of important ceremonies. In one village I saw, a rong that had been gutted by fire. After rebuilding, some of the wood still bears the scars of the day it went up in flames. Keen to show concern for keeping alive the traditions of ethnic minorities as well as maintaining a presence in the community, Vietnamese authorities gave approval for villages to make their own choice about designs of new rongs. The communal building in Kruh's own village was falling apart so a new one was constructed in 2006. Wood from the forest was used to construct churches, a time consuming process when men would stay away for days to chop down trees, sleeping in the forests, and then bring back trunks by buffalo and cart. These days, trucks carry back the necessary materials. However, this has led to large areas of deforestation.

Other buildings that are booming in construction include Catholic churches. Thanks to French missionaries, wooden churches are being erected in villages everywhere. The most famous wooden church in Kon Tum is in Nguyen Hue,  and contains an orphanage at the back, which is simply called Vinh Son 1.

Bahnar people take their religious worshipping seriously and attend 6:00 am Sunday mass without fail. The church is one place where children also learn their native Bahnar language because they are forbidden to learn their mother tongue in Vietnamese schools. Practice in Catholicism is strong, a legacy from the days when the French colonial authorities administered daily affairs for everybody in Vietnam. In Kon Tum, the church has effectively served as a springboard for keeping alive indigenous traditions. There are plenty of photos at the rong depicting ceremonies and showing the efforts made to keep these traditions flowing. Very few, if any, ethnic minority people here are Buddhists, and a few are animist.

Kruh takes me on his motorcycle into the low lying mountain areas. We pass fields growing rice, corn and sugar cane. These are crops Kruh used to farm when he was younger. The Bahnar people have tended to these crops for many years, cultivating the soil and sending crops for consumption in the larger cities. Yet the fruits of labor seem to avoid the workers of the land and benefit the landlords and business owning neighbors who set up corner shops. Kruh instructs that we hop off the bike so he can show me an example.

Within one or two years, the business owners are making relatively sizable profits that people Kruh living in a poor village can only dream about.  I asked him if the Bahnars want to get involved in selling goods in shops like these. "We lack the experience and capital required to make enterprises like this work for us," explains Kruh, with a slight voice of discontent. "We see others making money and doing well for their families and I want that opportunity as well, but it is beyond many ethnic people. Sometimes I feel as if we are looked down upon because we only work the land. There is no money to be made in laboring in the fields, which is why I decided not to farm anymore."

We continued to walk through the village, passing a construction site which has pillars up. This will soon become the site of a new Catholic Church. Men and women worked feverishly to complete the job as soon as possible. I surveyed the housing styles, and very few of them are built like traditional huts. In the past 10 years, more homes have been built with bricks. They can be built in half of the time and with less money if laborers work seven days a week. A bamboo hut costs $2,000 to assemble whereas a brick home costs about $1,000.

At the same time, convoys of Vietnamese youths on motorcycles ride past flashing the victory symbol and saying "Helloooooo" to me as they head towards the Daklar River, a popular drinking spot. These are young men and women who travel from cities as part of tour groups to find this quiet spot for lunch and photo opportunities. The dry season has shortened the width of the Daklar River by two-thirds and water levels have dropped. The river is dirty as years of forest degradation and unseasonal rainfall wash away the hillsides.

Once the rainy season starts, it will be impossible to walk down here at all because the water levels will rise, and it will be visible only from the higher hills. Kruh recalls when, as a boy, the water was so clear he could drink from it. Nowadays, he says, you have to travel further up the mountain to get a more reliable source of clean water.

Our afternoon was specifically reserved for visiting Vinh Son 2, another Catholic orphanage. This is the largest of the orphanages in town and houses 200 children between the ages of sex months to 19 years. The definition of an orphan, explains the manager of the orphanage, Sister Jane, does not just refer to children who have lost a mother and/or father. It is anyone who has been displaced from their home due to economic hardships. Where parents and households have found it so difficult to cope with the costs of living, they have made the difficult decision of placing their offspring in an orphanage to be looked after.

The orphanage doubles as a permanent daycare for children who attend school during the semester and return home for holidays. They attend school in the morning and have the afternoon to themselves. Upon reaching 15, teenagers spend time working in the fields adjoining the school throughout the day and attend night school to complete their education. The price of feeding all the children for one day is 400,000 Vietnamese Dong ($USD25), and although the cost of rice is subsidized, the greatest concern is for those who cannot be fed, especially the infants.

I ventured into the children's quarters for 10 minutes. Against the wall were four children aged five or six years old sleeping in cots with steel cages designed for children half their age. Their growth was stunted. One girl lay there with open sores on her leg, flies buzzing around her. A solitary elderly woman adopted the dual role of nanny and nurse and tended to a newborn child, watching over five other children younger than three years of age. Since the heat prevented her from being more active around the premises, she entrusted four girls aged between eight and twelve to look after the children who were in a more serious condition.

With the number of children in orphanages, one of the English teachers at Vinh Son 1 Orphanage explained, the authorities were clamping down on foreigners travelling to Vietnam wishing to adopt village-born children and Vietnamese couples unable to conceive. Children without parents would now be permitted to live with extended family members such as aunties and uncles in the absence of direct family members. Upon reaching the age of 19, when they would be expected to leave the orphanage, these young adults would receive a plot of land in their original village to farm.

I thanked Sister Jane for her time at the orphanage, made a financial donation and left for the day.

Before my day had finished, Kruh told me, "The ethnic minorities are good people, kind people that want the same success as the Vietnamese have. I spent time in the army during the war, I served my country and I am proud to be Vietnamese. But I also have my Bahnar roots and I commit myself to upholding my traditions as much as I commit myself to the country I live in." The next time I visited, he promised, we would go to the more obscure mountains and see the plight of those in greater desperation.

"Wouldn't that be dangerous for you?" I asked.

"No, because I want you to see how we live so that you can bring more people here so I can show them our story," he responded. "I am not afraid to take risks. But the decision to stay silent and not aim to have the same rights and privileges as other groups living in Vietnam presents a risk that will be too late to redress if no action is taken now."