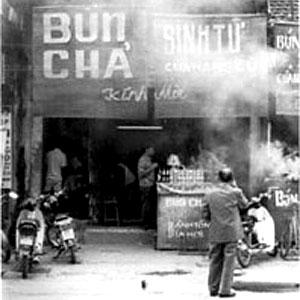 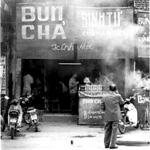 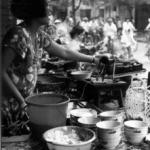 Our roving artist/photographer/author falls in love with bun cha and takes us on a culinary tour of Hanoi's sidewalk food stalls.

I resent the fact that for 17 years of my life, I did not know bun cha existed. I lived in cities in central Vietnam. Bun cha is a product of the north. How many bowls of bun cha could I have eaten in 17 years? How many bowls have I already missed? Come to think of it, I did not go to Paradise (read: eat my first bowl of bun cha) until I was 30 years old, when I came back to Vietnam after living abroad for more years than I care to remember.

It was my first visit to Hanoi, at the end of a five-week trip to my homeland. My companions were two American radio journalists who saw safety in established restaurants serving Vietnamese food that in fact could pass for French. Or British (read: no spices, or taste). (Sorry, we tried to take this out. But he insists. Ed.)

Being home after 15 years was pure happiness. Eating all that Vietnamese foods all the while was divine. And being in Hanoi was a dream come true. But few things can compare to eating bun cha. In Hanoi. On the streets.

One fine fateful day during that trip, I got my companions to "sidewalk" it with me. Actually, when I saw the tables and stools on that sidewalk, I just sat down. My companions didn't have a choice. "What are we eating?" one asked.

"Vietnamese food," I announced. I had no idea. "You'll like it.

"I didn't know we had stumbled upon a bun cha stand (Or, to tell the truth, a bun cha squat. The stools were so low, you might as well be squatting.) Imagine my face when the woman brought out the enormous plate overflowing with every kind of vegetables and leaves and greens. Then came the plate of white noodles. Then the bowl of broth. Golden and clear, like the color of the finest cognac. (Really? Ed.)

And then I could smell it. The aroma. The soft, sweet perfume of the grilled meat and meat balls, and the thinnest slices of cucumber. The whiff of Vietnamese seasoning sauce, nuoc mam, thinned and textured with just a drop of oil. All so inviting in that bowl of golden broth. (I'm going to lunch. Edit this later. Ed.) A feast I'd never before known. On a Hanoi street. Right in front of me, ready for my consumption.

It was magic. I attacked the food. Devoured it. I made it all disappear inside me, faster than you can say "Bun cha!".

In the six years since that trip, I have returned to Vietnam several times. And the first thing I do in Hanoi is, well,...you know. Can't help it! I have to have bun cha. Have to have it now! And hurry up, would ya, please? I want to go next door, eat another bowl. No, one isn't enough. Are you kidding? I haven't had one since my last trip to Hanoi. Pleeaaase.

Last December I actually had a day in Hanoi in which I subjected my stomach to three bouts of bun cha. (Do you have to admit this, really? Ed.) Okay, shame on me, I know. I had bun cha for breakfast. Had it for lunch. Had it for dinner. Just couldn't resist. (I'm reasonably sure I'll do it again. Just make it soon.) The only thing that helped the shame was the fact that I didn't eat all three bowls of bun cha at the same place in the same day. (Some self-respect left, huh? I'm impressed. Ed.) ( I only had the one bowl next day, at another bun cha stand, okay?)

So what's with this bun cha? (Hey, nice title for a book. Thanks.) Bun cha is an impossible obsession (Any Freudian analyst reading this? Please call. Ed.)

All right. For you calmer, more rational souls, I'll conceded, bun cha is just a noodle dish. It comes, as mentioned above, in three components: the green (veggies), the white (noodles), and the golden (broth).

The veggies. Let's see. Red leaf lettuce. Green leaf lettuce. Basil. And mint, and cilantro. The one that's purple on one side and green on the other, and some type of shaved celery that's all beautifully curled up (hey, I'm not a botanist or biologist or vegetarist, okay?) Also, a triangular leaf called diep ca which has a delightful tangy and lemon taste to it. I'm missing about four or five, maybe eight, other kinds of green leaves and herbs that normally accompany this fabulous meal. The pile of green leaves simply looked like some Amazon jungle. (Now, now. Ed.)

The noodles provide the white in this green environment. Noodles are noodles, but these are of the medium-thickness variety, and the whiteness attest to their freshness. Dated noodles turn a shade darker, and they stick together. At good bun cha places, the noodles should slide off each other easily.

The meat. The piece de resistance. Ah. My English fails. Sweet, succulent bite-size pieces of pork, grilled on charcoal fire. Some wrapped in la lot, large, round and crinkled grape leaves with a delicate flavor. Some seasoned with garlic, black pepper and the slightest touch of chilly sauce.

The broth. Just before you are served, the meat is dipped into the broth, which is made of a touch of fish sauce, thinned with a mixture of sweetened vinegar, water and lime. It should be clear, with just a fragile swirl of oil from the grilled meat. No one ingredient should overwhelm another. A few slices of the thinnest pickled cucumber at the bottom of the broth provide a bittersweet taste.

The delight. Pick up a few strands of noodles, and a few of the green leaves, dip it in the broth. On the way back out, gracefully pick up a slice of the grilled pork and bring it all to your mouth. You should feel your tongue going all tangy and sweet at the same time. Relish the texture of the raw leaves, the smoothness of the noodle, the sweetness of the meat, and lemony taste of the broth. At this point, open your mouth and say, "Ahhh." Follow that up with an "Uhhmm." You're in paradise. (Edit this later. Out for dinner. Ed.)

Never mind the Ed. Just repeat the whole procedure, again. Enjoy. And when you're done, look over to the corner. See that man with a grin as wide as the Halong Bay? That'll be me. If I'm not there, try the Kim Dac restaurant (at number 1, Hang Manh Street, in the old quarter). The Kim Dac serves only bun cha. (Just your kind of place, isn't it? Ed. I'm back.)

Look carefully, the place tends to be really crowded at lunch, which starts at 11 am. Some evenings, it isn't open, or closes early. One of the reasons I like the Kim Dac is the fact that the stools are actually the right height. And there are three floors, so if the ground floor is all full, keep going upstairs; but sharing a table is acceptable, encouraged, or plain unavoidable. Hanoi residents tend to leave you alone when sharing a table, but why not smile and talk to them, learn something from a native? Only, you must be careful if you happen to speak a language they understand.

When I last ate at Kim Dac, a caucasian man across from me started to speak German to his two Vietnamese companions. From the other end of the table, a voice piped up (German spoken with a northern Vietnamese accent.) I then heard the man protest that he wasn't German at all. I understood this ( I don't speak German) because the man's protest was in Vietnamese. (Confusing, Ed.)

Soon, I was doing the ping-pong table number: turning my head from the Vietnamese man speaking German to the caucasian man replying in Vietnamese, and back again. My bun cha was getting cold. Suddenly, one of the Vietnamese with the caucasian man spoke up. It was in English, with a French accent. Then the white woman next to me replied in English, with a British accent. My bun cha was really cold by now, and since I had nothing in my mouth, I burst out: "This is too international for me!" To which the British lady said: "Oh -you speak English? Are you Japanese? (You've lost me now. Can we go back to the noodles? Ed.)

By the time I could resume eating my beloved, if cold, bowl of bun cha, we were all talking to one another, in all kinds of languages. The caucasian man turned out to be a Swede who's been working for the UN in Vietnam for 15 years, and he's married to one of the best known Hanoi painters. He emphatically told me: "This is the best bun cha restaurant in Hanoi." I agreed. (He's been eating bun cha for much longer than you, hasn't he? Ed.)

At the rate I eat bun cha, I am glad there are other places to go in Hanoi. Tong Duy Tan Street, at the end of Hang Bong Street, where five major roads merge, is absolutely the place to visit. It's a whole alley of restaurants and food stands. There are all kinds of dishes served in this little alley. Young men will park your motorcycle for you, and then you can select your spot (but it would be nice to park where you are going to eat. The men work for individual stands.) Tong Duy Tan is famous for its ga tan, a medicinal chicken soup, but there are also xoi stands, gluttonous rice served with stewed pork, or the restaurants offering Chinese-like fried noodles.

Best of all, there are four places serving "Paradise." None of them has a name; just look for the word bun cha painted on pieces of plywood hanging outside. Squeeze your way through the bikes, motorcycles, customers and "valet attendants," etc. Sit under the verandah of the old French houses and try a bowl of bun cha. Talk to the old women if you can. Tong Duy Tan eateries have been around for four or five years, but the women have been in Hanoi for many more years, and they all have great stories. And they're the sweetest grandmothers.

One of them beamed a black-teethed smile at me one day as I was indulging myself in my bun cha obsession. "You must be from the South," she said.

"People from the South just seem to eat nothing else. They all come here and eat bun cha all the time. Every day. I've seen you. You were here yesterday, weren't you?"

"Chau me bun cha lam, thua ba a," I replied. A bit of an understatement. But it's embarrassing to admit one is obsessed. "I love bun cha very much, dearest grandmother." (Yeah, we know. Ed.)

The Oldest Embroidery Shop in Hanoi