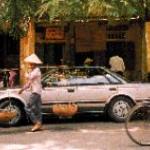 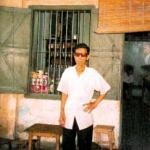 It was by accident that Nguyen Van Lam became an art collector. Books were his hobby. And when he wasn't looking for rare books, he was busy starting a cafe in the heart of Hanoi's old quarter. But some of his patrons couldn't pay, and gave him paintings in lieu of cash for long hours spent drinking coffee and talking.

Forty years later, Mr. Lam is still serving some of the best coffee in town, and on the walls of his small, dimly lit establishment hangs an outstanding collection of modern Vietnamese art. Connoisseurs skip the city's Fine Arts Museum and go directly to Cafe Lam. And unlike the shiny new bars and restaurants springing up around the city, the one-room Cafe Lam is both an institution and an education. Mr. Lam opened his coffee business in late 1949 when he moved to Hanoi from the countryside. He began with just a sidewalk stand and later expanded to a cafe on Hung Voi Street. In 1956, Mr. Lam bought the building at 60 Nguyen Huu Huan where he still lives and works. The cafe became a gathering place for students and artists in the '50s, a turbulent time as French colonial rule was coming to an end and Vietnam was taking control of its own destiny. Many of the great names in Vietnamese painting passed through here: Nguyen Sang, Nguyen Tu Nghiem, Van Cao and Bui Xuan Phai, renowned for his scenes of Hanoi past.

These artists were among the last students of the Ecole des Beaux Arts de L'Indochine, founded in Hanoi by the French in 1925. While their work reflects the French training, their ability to combine Western and Asian techniques has been a strong influence on younger artists. Their legacy now covers much of the chipped and peeling walls at Cafe Lam.

The collection represents several generations of Vietnamese painters and is a lesson not just in art, but also in Vietnamese history. There are oils, watercolors, abstracts, calligraphy and landscapes of the Vietnamese countryside and extraordinary Halong Bay. The first generation of artists studied in Paris or under French teachers at the Ecole des Beaux Arts. The school later became the Hanoi College of Fine Arts and guided a new group of students during the war against the French. Yet another generation, many of them self-taught, came of age during the war with the U.S.Each of the almost 1,000 paintings in his ever-expanding collection holds special memories for Mr. Lam, and he has no plans to take advantage of Vietnam's growing art market. Standing beneath a portrait of himself by Van Cao, he says, "I have no favorite painting. I love them all."

He dreams of having a space in which to exhibit the works properly.

Some of the art is in the cafe, but if you want to see the full collection ask Mr. Lam or his wife to take you behind the beaded curtain that leads to their living room. Their personal quarters are furnished with an opium bed, a fan, a couch, two chairs, some of Mr. Lam's books, stacks of Chinese and Vietnamese ceramics and a seemingly impossible number of paintings.

The works survived the American war in Vietnam in good condition - Mr. Lam moved them into an air- raid shelter for safe keeping. It's not as clear, however, if the collection and the landmark home on one of the historic 36 streets that make up the city's original ancient quarter north of Hoan Kiem Lake, the Lake of the Restored Sword, will fare as well in the '90s. Cafe Lam is ensconced on the eastern edge of the old quarter, a short stroll from the lake. It is one of thousands of charming but dilapidated buildings, some of them dating back to the 15th century, when the streets were named for the tradesmen who set up shop there: Silk Street, Flower Street, Paper Street. Even now, the best silk shops are on Hang Gai Street, and for chopped-fish restaurants try Cha Ca Street, literally "Fried Fish Street."

But not everyone wants to live in an overcrowded architectural museum that lacks even the most basic amenities. Thus, with land prices skyrocketing and eager developers desperate to secure space in downtown Hanoi, construction cranes now crowd the skyline.

Mr. Lam fears that old Hanoi, much of which can now only be seen in the Phai paintings on his walls, will soon be completely obliterated as conservationists lose the battle against the wrecking ball. "The American bombs were not very destructive compared to the way money is now destroying the city. The bombs did not destroy too many old trees and buildings. Now money is ruining Hanoi. I am sorry for the old buildings, the old trees."

Although the artists are gone, the cafe still attracts a loyal clientele who sit on miniature stools clustered around seven worn wooden tables. Ceiling fans keep the house cool in the summer. You can also sit outside and watch the pedicabs and hawkers ply the tree-lined street.

Nguyen Khuyen, editor in chief of the Vietnam News, has frequented Cafe Lam since his student days. He remembers the walls before they were covered with modern masterpieces. He remembers the days when the painters stopped by for a drink. Decades later, this remains his cafe of choice, a familiar haunt where he is sure to run into friends. But his main reason for coming to Cafe Lam is the coffee, and he boasts that he drinks it "straight," a form that many foreigners find a bit too robust. Even a few sips of the potent brew are contraindicated for those with heart conditions.

Mr. Lam learned to make coffee from his father. He serves it hot, iced, black or, as is common in Vietnam, with a layer of sweetened condensed milk in the bottom of the cup. He points out that he can make coffee to suit French or Vietnamese tastes.

What makes his coffee special? "It takes time to make good coffee. I choose the beans myself and dry them by a small flame and then grind them." Now 65 years old and semiretired, he has taught two of his seven children to carry on the tradition. The cafe, open daily from 6 A.M. to 10 P.M., also offers Coca- Cola, beer, Ovaltine and fresh-squeezed orange or lemon juice.

The Lams keep a visitors' book in the back room. A medley of travelers, admirers and museum curators have filled the pages with sketches, tributes and messages in every language. One guest left these words: "One is drawn to the time when the masters wandered in and out exchanging a painting for a coffee and probably a good dose of encouragement and support. Your role has had an historical equivalent in every period in every place, which seems to bring us all together."

In an increasingly commercial city, the house of Lam is one of the last places you can glimpse old Hanoi and bask in the romance and somnolence of an age that is all but gone.

Getting there:
Coming from the direction of the Metropole Hotel or the Government Guest House, Cafe Lam is a block and a half north of Cathay Pacific's office on Pho Ly Thai To, a main avenue that continues into Nguyen Huu Huan. The cafe, faded yellow with green shutters, is on the west side of the street. A cadmium- yellow signboard hanging over the window shouts "CAFE" in bright red letters. The sign also has the address and two large words in blue: rang xay, meaning roasted and ground.

The Story of Nom