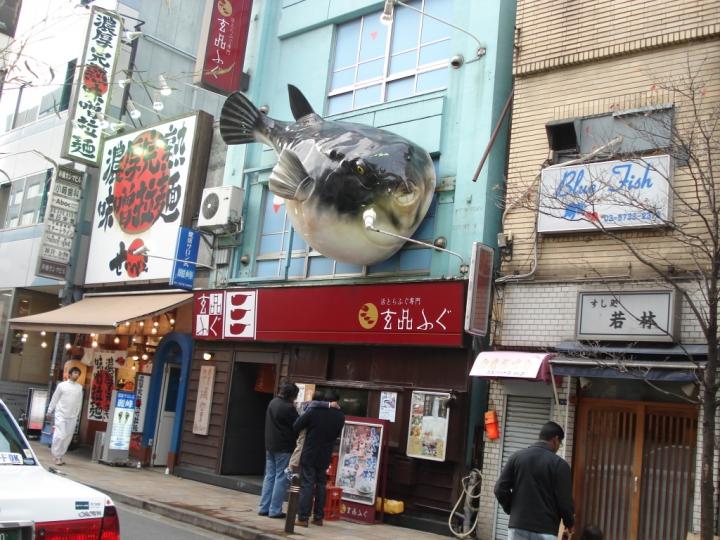 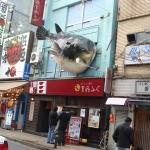 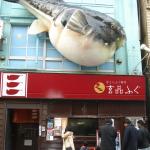 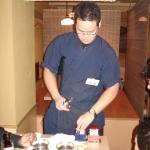 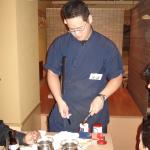 Someone told me long time ago that if I was ever in Japan, I should try the infamous and intriguing ‘fugu’ – a local delicacy in the Land of the Rising Sun. Fugu is the Japanese term for a fish native to the Pacific Ocean. The name comes from fuku meaning 'to swell'.

It is the generic term for any fish in the Tetraodontoid family, which are the 'puffer' fish, also known as blowfish or balloon fish. It is a rather unattractive fish, which has the ability to puff its body up to 300 times its usual volume and extend spikes for protection. The fish pumps air or water into the first two thirds of its stomach. The skin is able to stretch due to collagen fibres that reinforce it, also providing strength. If it is caught and eaten, it has been known to inflate after it has been swallowed, killing the predator, and then gnawing its way out of the stomach. If this doesn't work, the predator will die from the toxin.

Some of the fish's organs - the ovaries, testicles, skin, muscles and particularly the liver - contain tetrodotoxin, a powerful poison. Tetrodotoxin is 1,200 times deadlier than cyanide, and one fish contains enough poison to kill 30 people. Acting mainly on the nervous system, the symptoms in order of severity are:

And of course, the most important fact one needs to know is that there is no known antidote. So, chefs have to be specially trained and licensed to prepare and cook fugu. Fugu fish poisoning does still occur in Japan, with between 30 and 100 cases of poisoning reported every year, although most of these cases are caused by home preparation.

Well, all this in mind, I thought what the heck and decided to take my pal’s advise. I told myself nothing was going to scare me away from this gastronomic adventure! From our flat in Hamamatsucho, my hubby, me and two kids along with three friends, decided to take a slow walk one cool morning to Shimbashi looking for a fugu restaurant.

We found a restaurant with this big puffer fish fixture hanging above its entrance, not sure what the name of the restaurant was since the signage was in Japanese. Getting ourselves comfortable, all we did was just tell the waiter that we wanted to eat fugu. I remember him smiling silently. Wonder what was going through his mind. I could almost hear him thinking “These foreigners they don’t know what they are getting themselves into…”

Anyway, I don’t think we waited so long for our food, though it did seem like eternity due to our anxiety in trying out this rare treat. By the way, we knew we were going to burn a huge hole in our pockets because we have been told that the fish is expensive! However, as I said earlier, having decided that we were going to go in full force to eat fugu come what may, nothing, not even the price, was going to stop us.

The waiter first came back with the fish fin, fried it or rather burnt it right in front of us and served it in hot sake to all of us. My main concern was whether the sake would have a lingering fish smell that will of course, turn me off the sake for good. But you will be surprised that no such smell sprung from the sake. In fact it tasted good. First meal – success.

We were then served with thin slices of raw fugu with some vegetables and mushroom in soy sauce. Let me tell you that I am no big fan of sushi and sashimi. So, the idea of eating raw fish wasn’t actually tempting for me. But I did try it. I didn’t want to be labeled unadventurous. And lo and behold! The fish was so good. It had no fishy smell. Nor did it taste anything like fish. It actually tasted like meat. Of course, as a mother, I wanted my children to taste this wonderful food.

I read somewhere that symptoms of poisoning such as numbness of the tongue and lips appear between 15 minutes to several hours after ingestion but, rarely, may surface up to 20 hours after ingestion. But I have to tell the truth, I didn’t wait for 15 minutes to find out if I was suffering from any poisonous symptoms. I was enjoying myself too much that I fed my children the tender fish as soon as I ate mine so that they too could taste its deliciousness.

The next course was grilled fugu. We were served with something that looked like a hot pot with a grill pan on it. This part was ‘cook yourself your own meal’ section. We did our own grilling. Mind you the fish was so tender and juicy, we could have eaten more. But all good things must come to an end.

The last course was fried fugu. Lovely too, I must say. So, there you are, every which way a fugu could have been eaten, we had done it. Drank it, ate it raw, grilled it and fried it. That was a lovely meal, we all concurred, but not enough to fill our bellies. It was just a snack. As I said, fugu is expensive. We can’t afford to eat a lot. So, to fill our stomachs, we decided to venture into the nearest KFC for a bit of fried chicken.

Some of you may ask me “So, what’s so great about eating fugu?” Well, to me it was so fresh and exceptionally delicate though I admit I could have enjoyed it thoroughly merely because I was personally looking forward to this fugu eating ritual. But somehow, you have to admit that the thrill of eating a meal that could cost your life and surviving it is indeed exciting.

Trip to the Malabon Zoo