The Field of Bombs 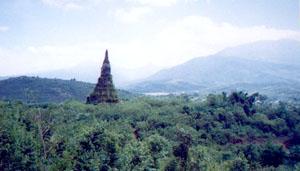 Landscape, Xieng Khuang, Lao. This was once a provincial capital. During the Secret war it was devastated by carpet bombing. Now this lone chedi stands as a memorial to the lost city. 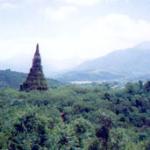 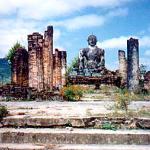 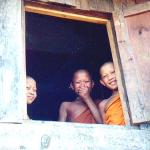 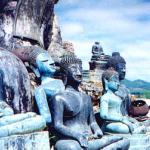 The trip began with a grim portent. Even while we were waiting on the tarmac of Laos International (ho-ho) airport I had a hint of what was to come. The small Lao Aviation plane had already finished boarding, or so I thought, when some more passengers embarked.

Hearing the grunts and groans I turned to see two men struggling up the landing steps bearing a stretcher with some poor unfortunate man strapped on. A fourth man brought up the rear carrying the patient's intravenous drip. They encountered a difficulty. They couldn't squeeze the stretcher through the plane's door. Have you ever tried humping a wardrobe down a flight of stairs? And you come to the un-passeable narrow turn? This was exactly the same problem. Heaving under the weight, the bearers tried every conceivable angle to get the sick man into the airplane. Eventually the only way was to lift the stretcher up on its side, so it was completely vertical. All this jolting and bumping must have been intolerable for the invalid who I could see by now was terminally ill. Once on board they balanced him across the top of several seats, while the intravenous-drip carrier tied it to a broom which he held aloft. They planned to take off in this position. Luckily the Lao-Aviation flight attendants came to the rescue. With that low tech ingenuity that two decades before had outfoxed the Americans they simply tied the drip to the overhead luggage locker, then used some spare straps to secure the dying man to the seats. And so we took off.

Why put such a sick man through this ordeal? Well in part because there were no roads to where we were bound. We were onboard the daily flight to Phonsavan, the remote capital of the province Xieng Khuang, far across the mountainous terrain of Central Lao. If he was going home to die this was the only way to get there.

Why was I going there? Well although Phonsavan is the merest of scratches on the map it is famous for one thing: the legendary Field of Jars. Sadly it is also becoming more famous, as I was to discover, as the field of bombs.

As the flight dropped hastily from the clouds we flew over acres of grassland pockmarked with craters. Resembling a lunar landscape, the scars of the "Secret War" were still clearly evident. During the Vietnam War the USA had heavily bombed Laos in order to disrupt the "Ho Chi Minh Trail. Twenty years later and the inhabitants of this poverty-stricken Asian republic are still counting the tragic toll.

I arrived at the tiny, dusty airport and took a tuk-tuk into Phonsavan, which I found to be an ugly concrete town surrounded by bleak barren slopes. Again, I was reminded of an unearthly vista, as if I were day-tripping to Mars. The sterile emptiness of the valley was another legacy of the War with America, the consequence of too much Agent Orange.

Having sorted out a cabin at a reasonably clean home-stay I set out to explore the streets. Drifting into a cheap café for lunch I chanced upon a middle-aged Brit who I'll call Brian. Poor Brian was in need of conversation and fell upon me, inviting me to join his table. Over a couple of Lao Beers and a bowl of steamy noodles he told me his story.

Brian was a bomb disposal expert! That's right, the stuff of heroes! After a distinguished career with the British Army, he had taken early retirement and eager to make the world a better place signed up as a volunteer with the UN bomb disposal organization who had him flown straight out to Phonsavan. However in all his years Brian had never been to Asia, now, over night, he found himself in one of the most "off the beaten track" slices of the continent imaginable. Brian was suffering from culture shock, big time! In my own humble way perhaps I was able to help him that afternoon in the faraway hills of Lao. I listened, and as someone who has been living in Asia for nearly 10 years did my best to empathize.

"Some days I turn up for work and my trainees have forgotten to fill the jeep with petrol! They tell me to take the day off! How can they forget something as crucial as petrol!" He bemoaned. Brian explained to me that there were enough unexploded bombs leftover from the Vietnam era to keep him busy for another five hundred years, pineapples, daisy-cutters, bomblets, the whole deadly assortment. Only the day before he'd found two live missiles underneath a busy children's classroom. The focus of his job was to train up local Lao men to be defusers themselves. They were brave good-hearted souls but so eager to get stuck in he feared for their lives.

Just then we were interrupted. A man I recognized from the plane strolled in looking for Brian.

"He's very high up in the government" my newfound friend whispered in my ear. That would explain the leather jacket he was sporting, a pricey item in a country that can't afford roads. Brian, clearly a man of action, was not too happy to see the politician. In fact he invited me to dine with them in the evening, to help smooth over the embarrassing silences he envisaged.

My afternoon relaxing on the verandah of my cabin was also rather eventful. A truck rolled up loaded with tough looking Lao soldiers. They all poured out and formed a line of salutes for the last man to get down. Only he wasn't Lao but a gray haired American. What an arrival I cooed to myself! He checked into the bungalow next to mine and we swapped chit-chat across the fence.

"What line of work are you in?" I asked the mysterious arrival.

"Power" he snapped ominously and changed the subject. He evaded every question I intended to throw light on his identity, but reminisced in a general way about a life spent in Lao, Vietnam and Cambodia. That's all I ever managed to learn about him but for the rest of my days I always wonder if I was boarding next door to a spy.

The evening reunited me with Brian and Government man in yet another cheap noodle store. Now this is the important point: Phonsavan only gets 4 hours of electricity a day, from 6.00pm till 10.00pm. Sure enough, come the allotted hour the light-bulbs dimmed and died, while lanterns lit up through out the town. No longer able to see their beer with clarity Brain and his superior decided to shoot off to a second venue and Brian pleaded with me to accompany them as the icebreaker. So there I was, sat in the Unexploded Bomb Landrover, speeding out into the dark, deserted moors. The concrete houses quickly vanished into the rear view mirror. All around me was nothing but black fields and bombs. On we drove, up and down, over hills and through vales.

Then suddenly ...there it was!

Almost magically, out of nowhere, before my astonished eyes appeared...a disco! Lit up like the fourth of July it blazed with fairy lights! I was dumbfounded. A few miles away the country folk of Phonsavan were climbing into their hard paupers' beds with nothing to light the way but candles. Here we were showered with electricity! Was the supply to the town switched off to enable government officials and other nogoodniks to boogie???

The interior was a spartan, beer-sodden hall. A few depressed looking girls half-heartedly danced a routine. Dangerous looking individuals swigged beer with guns poking from their jackets. Our politician offered me any waitress of my choosing but I politely declined. Brian told me the place was run by an alcoholic German. I kept my mouth shut and my eyes firmly on my beer. This joint had all the charm of a wild west saloon on the eve of a shootout! Not to mention the sea of bombs outside, fifty paces in any direction and a possible boom could finish me off.

So there you have it! Even in the mountains of Lao there's always somewhere to get drunk and get laid! As long as you know the right people!

Some time after midnight Brian dropped me outside my slumbering guesthouse. Above us the stars, unsullied by city air, shone by their millions in great fuzzy spangles of silver. Brian hit the accelerator, no doubt mindful of tomorrow, risking his life and limbs yet again. I was left choking on his dust. I never saw him again.

As I crept into my cabin I thought I had enjoyed quite some adventure. Little did I know but the adventure was far from over.

The Risky Business Of Teaching

Once 'Round the Little Dragon