From Hanoi to Hollywood 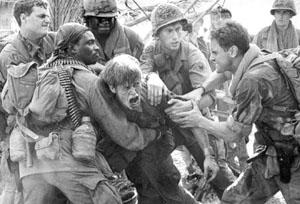 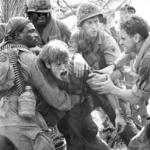 From Hanoi to Hollywood: The Vietnam War on Film
Featuring Works on Film and Video
Nov 1-30, 2002 at the Brooklyn Academy of Music

Series curated and program notes written by Gene Michaud, co-editor of From Hanoi to Hollywood: the Vietnam War on American Film.

In the 36 films that make up this program, noteworthy fiction and documentary films from Hollywood studios, independent filmmakers, and Vietnam itself are used to provide a selective but diverse look at some of the ways the longest war in United States history has been represented in film and video. The purpose of the series is to stimulate critical thinking and discussion about the ways in which the war has been portrayed and understood in American culture. In the end, the series aims to help us to better understand the possibilities and limitations of seeing and hearing the Vietnam War through the mechanisms of audio-visual media, and to provide important insights about media representations as they pertain to current and future military conflicts. Series curated and program notes written by Gene Michaud, co-editor of From Hanoi to Hollywood: The Vietnam War in American Film.

In conjunction with film series, BAM hosts a variety of complementary events: spoken word performances (Nov 14), two nights of songs about war (Nov 15 & 16), a symposium (Nov 16), and a BAMdialogue (Nov 19).

To complement select screenings, directors and commentators will be present for Q&A sessions with BAMcinématek audiences. Oliver Stone will be at BAM to speak about his film Platoon (1986), on November 2; documentarian Nick MacDonald will present his film The Liberal War on November 7; award-winning actor Matthew Modine discusses his role in Stanley Kubrick's Full Metal Jacket on November 10; film critic Elliott Stein will host a Cinemachat in conjunction with Ivan Passer's Cutter's Way (1981) on November 13 with actor John Heard; acclaimed Vietnamese filmmaker Tran Van Thuy will discuss three of his films on November 16; documentary maker Lynne Sachs will be present for a BAMdialogue with activist Rev. Daniel Berrigan at the New York premiere of Investigation of a Flame (2001) on November 19; Gail Dolgin will talk about the award-winning documentary, Daughter from Danang (2002), on November 21; the November 26 screening of Beth B's Breathe In/Breathe Out (2000) will be accompanied by a Q&A with the director; and Composer Galt McDermott and writer Jim Rado will answer questions about turning their musical Hair into a film on November 29.

General admission tickets to films and symposium panels are $9. Tickets are $6 for students (with valid I.D. Monday-Thursday, except holidays), seniors, BAM Cinema Club members, and children under twelve. Tickets are available at the BAM Rose Cinemas box office, by phone at 718.777.FILM (order by "name of movie" option), or online at www.bam.org. Performances at BAMcafe have no cover charge ($10 food/drink minimum). A dinner and movie package on Friday and Saturday nights at BAMcafé is available for only $30 (at the box office only). For more information, call the BAMcinématek hotline at 718.636.4100 or visit www.bam.org.

*The 6:50pm screening will be followed by a Q&A director Nick Macdonald. Nov 8 at 2, 4:30, 7, 9:30pm Coming Home (1978), 126 min Directed by Hal Ashby With Jane Fonda, Jon Voight, and Bruce Dern Hal Ashby's "warm, beautifully acted" (San Francisco Chronicle) Coming Home won the Academy Award for best picture, and leading actors Jane Fonda and Jon Voight also won acting awards. The film explores the impact of the Vietnam War on three Americans: a U.S. military officer, his wife, and the disabled Vietnam veteran with whom she has an affair. The film dramatically represents the domestic conflicts among individuals during the war's aftermath.

Preceded by:
Investigation of a Flame (2001), 45 min
New York premiere
*The 6pm screening will be preceded by a 45-minute BAMdialogue with director Lynne Sachs and activist Rev. Daniel Berrigan.

Through the Eyes of a Poet: The Vietnam War
Thursday, November 14 at 9pm
BAMcafe (no cover charge; $10 food/drink minimum)
An evening of readings and spoken word performances by authors who have written significant works related to the Vietnam War.

This is a forum to discuss the war, its aftermath and its representation in film. Renowned scholars on the Vietnam War and Vietnam veterans will speak with filmmakers who made works that have influenced our perceptions of the war and its consequences.

Panel 1 from 10:30 to 12pm
From Hanoi to Hollywood: The Vietnam War
This panel will examine representations of the Vietnam War in documentaries, television reporting, and film. Panelists include: Bernie Cook (Adjunct Assistant Professor in the American Studies Program and Associate Director of the John Carroll Scholars Program at Georgetown University); Peter Davis (recipient of the Academy Award for Best Documentary (1974) for his film Hearts and Minds); Gene Michaud (professor in the Communication Arts Department at Framingham State College and co-editor of From Hanoi to Hollywood: The Vietnam War in American Film); Carol Wilder (Associate Dean of The New School where she serves as the Chair of the Department of Communications, Film, and Media Studies); Jurate Kazickas (freelance photo journalist in Vietnam in 1967).

Panel 2 from 1:30 to 3pm
The War Remembered
This panel compares personal experiences of the war (in Vietnam and upon returning home) to those stories depicted in film. Panelists include Sondra Farganis (Director of the Vera List Center for Art and Politics at The New School University); Yusef Komunyakaa (professor in the Council of Humanities and Creative Writing Program at Princeton University), James L. Larocca (Dean at Southampton College); Tran Van Thuy (Vietnamese filmmaker); Marilyn B. Young (professor of History and is the Director of the International Center for Advanced Studies Project on the Cold War as Global Conflict at New York University); Nguyen Ba Chung (Research Associate at The William Joiner Center for the Study of War and Social Consequences at the University of Massachusetts, Boston).

Filmmaker Lynne Sachs, director of Investigation of a Flame (the intimate, experimental documentary portrait of the Catonsville Nine-the disparate band of resisters who chose to break the law in a defiant, poetic act of civil disobedience during the Vietnam War) talks with Rev. Daniel Berrigan (Catholic priest, social activist, poet, author of over 50 books, and a member of the Catonsville Nine). This event is free with same-day BAMcinématek ticket and will be moderated by Sara Fishko, WNYC's Special Cultural Reporter.

BAM Howard Gilman Opera House, BAM Rose Cinemas, BAMcafé, and Shakespeare & Co. BAMshop are located in the main building at 30 Lafayette Avenue (Lafayette and Ashland) in the Fort Greene neighborhood of Brooklyn. BAM Harvey Theater is located at 651 Fulton Street (between Ashland and Rockwell) in Fort Greene, Brooklyn. BAM Rose Cinemas is Brooklyn's only movie house dedicated to first-run independent and foreign film and repertory programming. J.A.M Catering Services provides food and beverages at BAMcafé, which features an eclectic mix of spoken word and live music on Friday and Saturday nights as well as Sounds of Praise (live gospel music with a soul-food buffet) on selected Sunday afternoons. A package including dinner in BAMcafé and a movie ticket to BAM Rose Cinemas is available for only $30 (at the box office only). BAMcafé is open Friday-Saturday from 5-10:30pm and Sundays from 2-8pm. Additionally, dinner is served from 5-7:30pm on all Monday-Wednesday mainstage performance nights.

East Timor on the Web