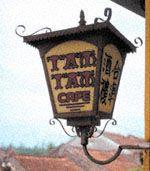 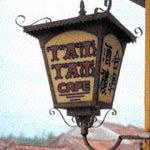 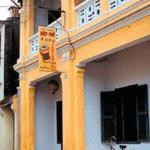 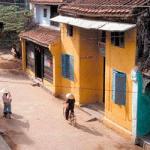 With characteristic entrepreneurial spirit, the residents of Hoi An are taking the foreign tourist invasion in stride. A whole range of businesses have sprung up, including guesthouses, restaurants, travel agencies and silk tailor shops. One such enterprise is a bar-restaurant run by a voluble French expatriate named Christophe. His Tam-Tam Cafe is certainly not the first foreign-operated establishment in Hoi An, but I'm sure that it is one of the most enjoyable.

Originally from Normandie, Christophe first fell in love while touring the nation by motorcycle. He traversed the length of the country three times, putting 30,000 kilometers on his motorbike. Christophe went, as he puts it, "by the small way." This intimate backroads journey showed him a side of the country that few travelers ever see and by the end of his travels Christophe knew that he wanted to live here. This necessitated earning a living, and voila--the idea of the Tam-Tam Cafe came into being.

Two years later, in November of 1996, the Tam-Tam Cafe finally opened its doors. Starting the business had been a lengthy and complicated process. Christophe first had to find a suitable location. After careful thought, he chose Hoi An for its laid-back small-town charm and steady supply of foreigners. Next he had to find a Vietnamese business partner and locate an appropriate building. After he and his partner bought the building, it had to be extensively renovated.

Like every building in Hoi An's historic town center, the building Christophe acquired at 110 Nguyen Thai Hoc Street has a story to tell. Constructed in 1932 by the French, the cafe originally served as a colonial residence. Set one street back from the Thu Bon River, the building shared a street with some of the oldest homes in Hoi An. Chinese merchants later used the home as a tea warehouse and the modified warehouse layout provided the floor plan on which Christophe based the café. In a dusty corner of the building Christophe even found the original sign for the tea company, complete with the prewar French street name. The carefully restored wooden sign now hangs in the Tam-Tam Cafe and reads:

During the renovations Christophe sought to preserve the "China spirit" of the building. He succeeded brilliantly; certainly the Tam-Tam stands out as one of the most attractive cafes I saw. Much of the interior is original, from the arched doorways to the roof beams of the high-peaked ceiling where the occasional bat flits about at night, flirting with ceiling-fan disaster. Hardwood planks floor the spacious bar and lounge; the restaurant features the original Chinese tile. Gleaming like a snake, the polished wood bar curves in a gentle 12-meter S-shape, behind which are open windows that catch the breeze. The decor is an understated mix of rattan furniture, black and white framed photographs and subdued lighting. A 300-CD collection keeps the stereo system going and the pool table entertains an international cast of late-night beer drinkers.

Christophe chose the name "Tam-Tam Cafe" because he wanted a universally recognizable name suitable for a place that would serve people from all over the world. On any given night I could meet people from Sydney, Singapore, Stockholm and San Francisco, but regardless of their mother tongue, I felt sure that they all recognized a tam-tam as a percussion instrument. The word "tam-tam" carries a double meaning as well, because in old Vietnamese it means the number 33, which is considered lucky. When naming his cafe, Christophe wisely figured that a dash of bonne chance couldn't hurt.

Christophe offers an imaginative selection of alcoholic and nonalcoholic mixed drinks that he takes special pride in preparing just right. One night I looked on as he enlisted the help of a Mexican traveler named Gebran in making margaritas. Gebran, a former bartender himself, advised adding a dash of orange juice. Gebran turned up his nose at the well-traveled bottles of Corona that sold for an impressive 40,000 dong* and joined me instead in appreciating the draft BGI beer brewed in nearby Danang (9,000 for 30 cl./16,000 for 60 cl). Each draft came in a frosted glass mug designed by Christophe and made by local glassmakers. A light, crisp and refreshing brew, BGI remains the perfect beer for a hot summer evening. I reckon BGI is the best beer produced in Vietnam and the fact Christophe has made it the cafe's principal beer shows his insistence on quality.

For the time being, the Tam-Tam Cafe's restaurant serves only dinner although occasionally Christophe prepares lunch for prearranged tour groups. He offers French and Italian food, plus international bar fare like baguette sandwiches (20-30,000 dong), french fries and various kinds of soup. Crepes are a house specialty and range from 10-40,000 dong each. The restaurant does not have any Vietnamese food on its menu as Christophe does not want to compete with local restaurants. He knows such competition would not endear him to the community and besides, he explained with a Gallic shrug, the locals will always be able to prepare Vietnamese cuisine better than he ever could. Christophe focuses instead on what nobody else in Hoi An serves: gourmet European food.

An ambassador at heart, Christophe tries to give something back to Hoi An. Aside from employing fourteen local people, Christophe runs a book exchange program in which travelers can swap their book for any title on the cafe's shelves. They pay 5,000 dong each time they do this and the money goes to the Australian Association. The Association then puts the money to use in the community. Christophe says proudly that his book exchange helped buy a baby water buffalo for a nearby village that could not afford to purchase one on their own.

Christophe clearly has the spirit, and the money will no doubt follow. But money is not the issue; clearly the Tam-Tam Cafe remains Christophe's labor of love--for Vietnam, for the amazing assortment of international patrons, for fine food, drink and conversation. If you go to Hoi An, be sure to climb the stairs to the Tam-Tam Cafe and enjoy its Franco-Vietnamese joie de vivre.