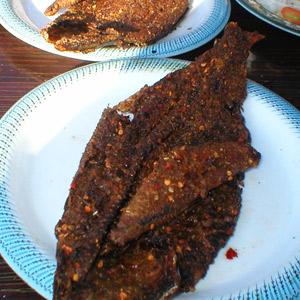 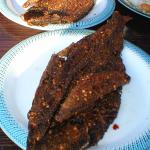 Hyderabad lies some 150 km northeast of Karachi, on the eastern bank of the Indus River. You can easily undertake a day trip from the city, but I stayed there for four days in order to explore it in depth.

Hyderabad does not boast those winding lanes one finds in Lahore, nor magnificent tombs to match the ones at Multan and Uch Sharif. Yet it abounds with places worth a visit, even if they're not always well publicised.

There is the old mud fort, now almost in a total state of collapse - it must be some unknown power that keeps it from falling to pieces. Then there is the mazaar of a Sahabi-e-Rasool, a friend of the Prophet (pbuh). For this reason, it is visited by a large number of people. As with all mazaars in Pakistan, it is full on Thursdays. There is an old, small yet good-looking mosque just behind this mazaar , a must see for every traveller.

The next port of call is definitely the new fort, occupied by the Urdu-speaking families that migrated here after Partition. The main gate of this fort indicates, quite clearly, that it belongs to a period of racial divide. Facing the fort is another mazaar, that of Saint Hazrat Syed Sakhi Abdul Wahab Gilani, who led the namaz-e-janaaza of Hazrat Sheikh Abdul Qadir Gilani.

The Hyderabad museum holds a wonderful collection of locally produced items, and offers a glimpse into the lifestyles of the various tribes that inhabit Sindh, some of which have now died away. Photography is prohibited, but you can pay the man at the counter and set your camera free. The wheels of democracy stop right here. Next to the museum, an exhibit comprised of straw and mud homes has been erected, life-sized replicas of the originals that one can still see in the Thar Desert. Here too, you can literally pay your way in. The greasing of palms can be avoided if you possess good communication skills and I, for one, opted for the latter.

When it comes to bazaars, Hyderabad is second to none. The locals say that the Shahi bazaar is the oldest in Asia. To prove his point, a man called Naseer made me travel the entire length of the bazaar, spanning an estimated 3 km. At the far end, the bazaar comes to an end at the foot of an imposing tower: surely one of the most striking of those built by the British.

A visit to the Shahi bazaar isn?t complete without taking the time to snap up a bargain. Hyderabad is famous all over Pakistan for its churiaan (glass bangles), and there are lots of designs to choose from. Other items that can be bought up cheaply around Hyderabad include embroideries, precious-metal goods, cutlery, kashi (hand-glazed pottery produced in neighboring Hala), jhandi (lacquered wooden furniture), ajrak (the famous cloth, for custom designs visit Bhit Shah), susi and khadhi textiles.

The zoo, perhaps, is to be avoided. The animals are kept in poor conditions, and one of the lions I saw appeared on the brink of starvation. Oddly enough, outside the zoo stands a lone fighter jet that has been stripped of all its dignity. One Hyderabadi told me that it?s an Indian airplane, shot down by the Pakistan Army in probably the 1965 war. But the question remains: why outside the zoo?

If you prefer to stray from the beaten track, I recommend a place many would never consider visiting: the School of Nursing. It?s the largest of its kind in Asia, and there is tremendous staff dedication, something you don't see in many of the expensive, so-called top-end hospitals of Pakistan.

Hyderabad is renowned for its palla fish, the tastiest that the River Indus has to offer. The best to be had is from the restaurants on the bank of the river, but the price is steep: Rs 400 a piece nowadays. Plus, there is no guarantee that it was actually caught in the Indus (a cheaper, inferior version is being imported from Iran). A better option is to convince a relative in Hyderabad to cook palla for you. An uncooked fillet can be bought in the bazaar for as little as Rs 150.

NOTE: This article was originally published as a travel piece in weekly Friday Times on 25th June, 2005. I hold the copyrights. (The photo was also published with the article).