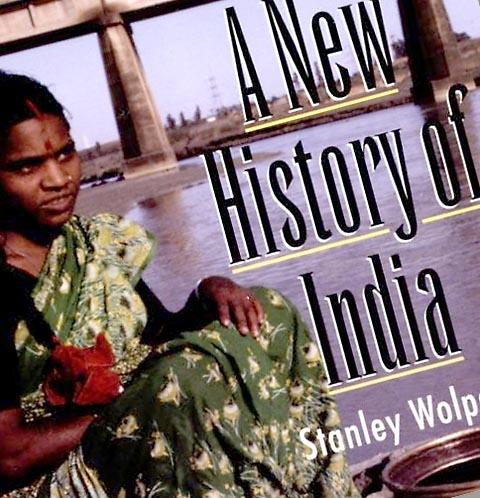 A New History of India 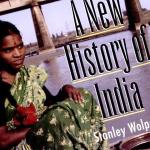 "To pursue schemes of conquest and extension of dominion in India are measures repugnant to the wish, the honour and the policy of this nation," Great Britain. So said Pitt's India Act of 1784. My, how times change! Or perhaps Pitt was merely continuing a long tradition of English hypocrisy, the conquest of India being a kind of unfortunate accident, like tripping down the stairs, at the foot of which is a pot of gold.

Recently I have been told that the United States also shuns conquest. Out of politeness to the deluded, I usually try to change the subject rather than recount America's numerous wars of expansion (from the Mexican War to Vietnam) as well as the some 250,000 US troops presently on foreign soil. History does indeed repeat itself. In this regard Stanley Wolpert's accomplished and accessible A New History of India has a lot to teach, not only about India but also about how a country emerges from its cocoon and takes wing as an empire.

India: the Jewel of the Crown. But did you know that England would have preferred the lucrative islands of Southeast Asia to India, but was driven out by the Dutch? So the English settled for the subcontinent, and swiftly began to import - civilization, so-called. They banned sati, or the ritual burning of widows. In 1891, in the face of strident Indian opposition, they tried to increase the age of statutory rape from 10 to 12 years. They introduced widespread private ownership of land. They rediscovered the matchless Ajanta caves as well as the Taj Mahal, and they compiled dictionaries of the principal Indian tongues. But above all they brought the train, the telegraph, and the Indian version of the penny post. And by doing all these things, the English were digging their own graves because the Indian nationalists would use their masters' tools against them, much as today's anti-Western terrorists use Western cell phones, C4 explosives, and airplanes.

Yes, the Indian nationalists were called terrorists. And aptly, for some of them used violence to attain their aims, or aim, which was to get England "off India's back" - to borrow Gandhi's phrase. We know relatively little about these terrorists, not only because Gandhi's nonviolence proved more effective than jihad ever will, but also because they may still arouse disapproval despite their just aim: men like Subhas Chandra Bose, whose Indian National Army declared war on the US and Great Britain during World War II; or Khudiram Bose, who became in 1908 the first Indian to blow up a Briton with a bomb. British reactions to which, writes Wolpert, "were predictably strident; one newspaper, the Pioneer, demanded the arrest of all 'terrorists', warning that in the future, 'ten of them would be shot for every life sacrificed.'"

Indian nationalists are apt to call the nasty events of 1857-1858 the First War of Indian Independence; the English tended to dismiss them as a mere mutiny. In any case it is interesting to note, as Wolpert does, that the war/mutiny "cost England a full year's worth of Indian revenue." Even during times of relative peace, the Government's military budget was up to 50% of annual revenue. Empires are expensive, and thus short-lived.

The industrialization and globalization of India did a great deal of harm. One striking case is that of the collapse of Bengal's textile industry, caused by the introduction of machine-made English cloth into Indian markets that had previously depended upon Bengali homespun. "Millions of Indian men and women," writes Wolpert ominously, "were thrown out of work by machines half a world away." Little surprise that Bengal would become India's bastion of Marxism, which emphasizes this mindless power of capitalism to disrupt old ways; or that Gandhi would make homespun cloth a symbol of Indian independence.

By emphasizing commercial over subsistence agriculture, the British "weaned India's peasants from their time-honored custom of storing extra grain in each village" as a protection against famine - with the expected result: starvation on an apocalyptic scale. In 1770, a famine exacerbated by British "spoliation" led to cannibalism and the death of "an estimated one-third of Bengal's peasantry."

This is something that modern-day modernizers often fail to understand. For an innovation to be bad, sometimes it is enough for it to be disruptive. People, and especially people from old, relatively stable societies like India's, can be quite slow to adapt. And though they may be better clothed, housed, entertained, and all the rest, they may also be entirely uprooted.

One innovation that the Indians did embrace, however, was the railway - much to the surprise of the English. Now one can hardly separate modern India from its massive steel backbone, even if the trains don't always run on time, or at all.

Some of the most cheering - and timely - portions of Wolpert's narrative have to do with the area now known as Afghanistan. When the army of Alexander the Great was trying to conquer India, there were rebellions against him in Kandahar. Wolpert calls the first attempt of the British to conquer Afghanistan "utterly futile", the second merely "futile". Having managed to occupy Kabul and Kandahar, they met "unrelenting opposition and hatred." There were assassinations, skirmishes between warlords, that sort of thing.

Not so cheering was the British invasion of Tibet, during which "hundreds" of monks were massacred, providing perhaps a lesson in pacification for the coming Chinese invaders. The history of what Malcolm Lowry in Under the Volcano called the "poor little" states is never pretty.

But Lowry's point was that every state is a poor little state at some point during its history, and only our ignorance of history makes us pity the poor little state of today. India the colony was once India the empire, colonizing poor little Bali and Sri Lanka and so on. Among the inventions Wolpert attributes to India are dice, chess, the weaving of cotton, the domestication of fowl. The Vedas are the oldest Indo-European literary works extant. Wolpert even argues that "drain of Roman gold" caused by trade with Asia helped bring about Rome's fall. Even Africa made its unlikely contribution: the first humans in South Asia are believed to have been migrants from African shores.

As for the poor little Muslims, they were among India's most spirited conquerors and their arid Arabian influence continues to cause the subcontinent no end of problems. "It is difficult to imagine," writes Wolpert, "two religious ways of life more different than Islam and Hinduism." Or Islam and Buddhism: Wolpert argues that Islamic persecution of Buddhism (most recently witnessed in the Taliban's pointless destruction of the Bamiyan Buddha statues) helped to drive Buddhism out of its South Asian birthplace.

Wolpert reminds us that officially Islam recognizes Moses and Jesus as predecessors of Mohammed, and thus Jews and Christians have "protected status". Not so Hindus, who were forced to convert for fear of the scimitar. Apparently Aurangzeb (d. 1707) was the Muslim emperor most hostile to the Hindu faith, and it is to the orthodox glory of his reign that some latter day fundamentalists seek a return. But on the whole the Mughals were not known for their austerity but for their voluptuousness.

A highly and diversely religious land that had been ruled by tyrants for centuries became, in 1947, two secular democratic states: India and Pakistan. To say the least, the transition has been imperfect. The two countries have fought three wars; both have endured de facto dictatorships; both have strong fundamentalist factions; both continue to suppress separatist movements. And both are still, despite admirable leaps forward, menacingly poor. According to Wolpert, "the United Nations' 1998 Human Development Report ranked India 139th out of 174 nations of the world (Pakistan was ranked 138th)".

It is hard not to see the irony in the fact that Sir Cyril Radcliffe, the man responsible for determining the geographical boundaries of Partition, had never been to India. Had he gone, he might have thought twice about the feasibility of his task. (Gandhi called Partition "obvious suicide".) India divided itself into states largely along linguistic lines; unfortunately, India has more languages than almost any country on Earth. Meanwhile, Pakistan's main problem remains, in Wolpert's words, "how to administer a 'modern' republic without losing support of Pakistan's orthodox Islamic leadership or their mass following."

Only in recent decades has India proven that it can be ruled by anyone who is not Jawaharlal Nehru or one of his descendants - Indira Gandhi and her sons Sanjay and Rajiv - or that it can have a leader that it does not assassinate: both Indira and Rajiv suffered the same fate as their namesake.

Indira remains an intriguing contradiction. Initially a somewhat unlikely successor to her father, she came to wield more power than any other Indian ruler. She was one of the first female heads of a modern democracy, which also happens to be one of the countries where women are most degraded. She also presided over India's entry into the nuclear weapons club and a number of bloody crackdowns on her own people, most notably the Sikhs, who would ultimately have their vengeance. Indira alone perhaps refutes the claim that a world run by females would be more peaceful.

India's nuclear weapons have perplexed those who would lay the hope of the world at India's feet. True, India felt compelled to create a deterrent to nuclear China, which had already invaded India once; and subsequently a deterrent to nuclear Pakistan, possessing what has chillingly been called "the Islamic Bomb." But there is a growing sense that India, like China, wishes to restore some of its ancient stature, to make Asia once more a seat of global power. If information technology proves more than just a fad, India's widening grip on this industry may prove to be the country's ticket to modernity. But like China, India faces the challenge of assuring that all its people, and not merely a Westernized, "neocolonial" elite, share modernity's benefits. Indira's own formula for Indian uplift was relatively simple. "The 'only magic' to eradicate Poverty," she said, "is hard work."

"A Million Mutinies" was how V.S. Naipaul described India in his book by the same name, and there is reason to believe that his diagnosis will prove correct. When the Soviet Union collapsed, the era of giant, unwieldy nation-states seemed to be nearing an end. India seems to be held together less by some vague notion of hindutva, or "Hindu-ness", than by the persistence of external threats, especially that of Pakistan but also of China and the West. India is the world's largest democracy, but the spirit of democracy is never very far from the spirit of anarchy.

On January 26, 1930, the Indian nationalists provisionally declared India's independence from England. According to Wolpert, they recited a pledge that included words from the American Declaration of Independence. They spoke of "inalienable" rights, and of how "if any government deprives a people of these rights and oppresses them, the people have a further right to alter it or abolish it."

Jefferson's words are as liberating - and dangerous - now as they were in 1776. For what the nationalists intended to say to the British Empire, separatists can now say to the Centre in Delhi. Self-determination's disintegrating force can persist until each man is a state unto himself.