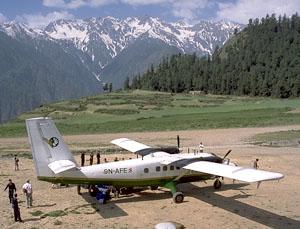 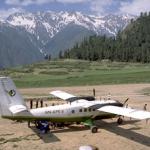 We flew from sea level to Simikot at 9,500 feet, and started walking -- up. Amazing, how quickly it all comes back: the agony, first. The slow, panting ascent on astonished, bitching legs; the throbbing in the temples, as the lungs try to leech the limited oxygen out of the air; the Thakuri children with their necklaces and nose rings, monotonously whining for pens or sweets of rupees. And then there's a pass, with a pile of stones and a white prayer-flag waving stiffly against the impossibly blue sky, the mountains stacked behind like peaks of tarnished silver.

The landscape is not yet magical, but very poor. The trails are rocky and ungroomed, long descents of slippery gravel, ascents along paths of rolling rocks and scree. The villages seem ramshackle, almost like shanty towns, with few outward signs of worship or celebration. The children wear filthy, tattered clothing. This is Nepal's impoverished northwest, and it is difficult to see where even a penny of 40 years' worth of development money has gone. I sit on a rock above the roaring Karnali, flies buzzing around my legs and face. Blizzards whirl around the nearby peaks, just on the other side of the Karnali. Today has been about re-learning how to walk in the mountains -- about rhythm, concentration, and the constant humiliations of stumbling. I find I have surprising energy, considering that our wake-up was at 4:15 this morning.

In Dharapuri: Jigme, the guide for Peter and Kendall (Norbu is no longer speaking with me at all), advises me to put away my laptop for today. The Maobadis are a strong presence in Dharapuri; I learned this from Ramraj, a sincere young schoolteacher I met along the trail into the village. "The Maoists are a very big trouble" he said sadly. "The are asking each schoolteacher for one half their salary!" "Do they use the money they take to improve conditions for the villagers?" "No. They are serving only themselves."

Tonight we will be expected to make our requisite "donation" to the local Maoist chapter. The fee, recently raised, is $100. per person -- including the Nepalese guides.

They were boys, really. The Maoists moved into the village in the late afternoon, reaching a force of about eight by twilight. They ranged in age between 17 and 25, armed with crude, Jumla-made rifles, flintlocks, knives, and their infamous mien of intimidation. I make conversation with some of them; they are better dressed, I note, than any of the villagers I've seen. And inevitably, in a place as small as this, there are filial ties between the rebels and the families they have chosen to extort.

Peter, Kendall and I went through our money and, putting aside the obligatory tips for the porters and cook (who had been hit up for $80) came up with a grand total of $180. -- not even 2/3 of what the Maoist bandits required of us. I believed that I could negotiate with their leader, claiming -- honestly -- that we were not told the fee had gone up, and literally did not have enough money to pay. Jigme agreed to act as translator. We squatted down outside my tent, which was just a few feet from the edge of a precarious drop onto the trail some 20 feet below. The Maoist deputy leader, who calls himself Rambo, perched right on the edge, and it occurred to me that with a slight nudge I could bump him off, down to probably death or certain grave injury. I can't say I wasn't tempted.

We went back and forth for many minutes, Jigme addressing the young leader in grave, solemn and respectful tones, me feeling very much the American journalist. In fact I told Rambo that I was a journalist, and that a few words about the local chapter's strategy and goals might be far more valuable than the extra money he was demanding from the three of us. Rambo went to confer with his superior, and returned, delivering a long speech to Jigme. Jigme then translated.

"He says that he understands you are a journalist, but that all people -- even Nepalese -- must pay the full amount, without exceptions. So you must give this gift this one time for the people's revolution. He says it is the difficult phase in their operation, and no exceptions can be made."

"But what if we simply don't have the money?"

Jigme looked at the ground, and muttered the question to Rambo, who curtly replied. "He says they will take travelers' checks," Jigme translated.

I ponied up the $50, meant for tips, and Peter and Kendall dug out $150, worth of American Express travelers' checks. We realized, with glee, that since the money was being stolen from us at gun point, American Express would be obliged to dishonor the checks. If only we had a satellite phone! We toyed with various strategies, first giving the checks to the Maoists unsigned -- but our own cook betrayed us, and brought them back for signing. We then lit on the idea of making the signatures look like a forgery, the better to tip off the bank -- or to falsify the passports numbers, which the rebels dutifully insisted, like Thamel money-changers, we write in block letters on the back. Peter finally just signed the checks over, including the date as proof. "They were robbed from us, and we were forced to sign them," he said. "I'm sure AmEx will refund the money for us."

The whole encounter made me furious. The Army, garrisoned at Simikot, is terrified; and the Nepali government thinks nothing of charging a fee to visit the area, knowing full well that all visitors will be robbed but offering no protection. I was tempted to confront "Rambo" direction, simply refusing to pay -- what would he do? Would he be the first Maoist to harm a western visitor? In the end, though, I realized that the wrath of the Maoists would be taken out on the Nepalese staff. I forked over the money bitterly, longing for the days of the old West, when a good American might deal with these horse thieves John Wayne style. But then again, I was up against Rambo.