Kuching in my eyes 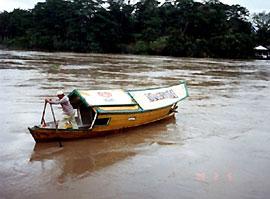 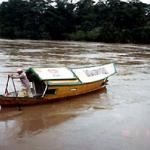 A boatman earning his sweat, Kuching Waterfront - Kuching
As the plane started to descend, I took a peek through the window. A view of Mount Santubong towering the nearby Damai Lagoon Resort brought a homey smile to my face as I came to realize that I am a step nearer to home, my home. Why I have never actually see the beauty, the charm of Kuching through this angle, I didn't know. It hits me immediately to proudly write about Kuching - the heart of Sarawak, the heart of the Land of Hornbills. The view of the Sarawak River, curved beautifully cruising its way in between the mystical tropical rainforest followed. Rich diversity of untamed nature, the alluring charm portrays Sarawak within seconds. The plane has landed on Kuching International Airport after another soothing view of the beautiful paddy fields. Yes, I am finally home.
Kuching, the biggest city in Sarawak and yet has its touch of being a clean and friendly place has much to offer for a relaxing gateway. Whether one is seeking for culture, nature, adventure or a cool refreshing holiday, this is the place. Kuching was named after 'kucing' which means 'cat' in English, is uniquely liven up by statues of cats everywhere, at the intersection, roundabout, and walkway! The biggest statue of a white cat can be seen at Jalan Padungan, greeting visitors and locals with his ever friendly paws gesture and occasionally dressed up for special occasion. E.g: Chinese New Year and Gawai celebration. A Cat Museum is a unique place not to be missed besides the Sarawak Museum that is regarded as one of the best museum in South East Asia. Built in 1891, it houses many fine collections of Borneo archaeological and ethnological artifacts.
In the city, one can have a pleasant stroll along the Waterfront from the Holiday Inn. The waterfront development was completed in 1994 as a common place for the locals. Although the river is not one of the cleanest river in the world (murky) as it is close to the ocean, locals and visitors get across it everyday by small boats. With just a mere 20 cents as boat fare as I remember it few years ago, you will get to visit the Fort Margherita. Named after the second Rajah's wife, Margaret, it was built in 1879 to serve as a fort to defend against pirates. Now it serves as a Police Museum housing cannon balls, guns, swords and many of its old cannons. Upriver from the fort is the Astana, residence of the second and third 'White Rajah'.
I have been to beaches like Redang, Langkawi, Pangkor and Tioman in Penisular Malaysia, but it has never feel more like home when I stepped foot on Bako National Park. The place that welcomes me time after time in an inviting way I could hardly describe, only could be feel. Its surrounding mountains, fresh crispy air, its wild monkeys and wild boars hanging out bravely as it is their home gives an exotic sight to its visitors. What amazed me most is the beautiful limestone formation along the beach, carved naturally by the wind and sea. A masterpiece fantastically formed by wave erosions million of years ago. The Sea Stack is a famous token of Bako that could be seen on the way to the national park by boat.
Major vegetation such as mangrove forest, swamp forest and sandy beaches make Bako'ss coastline a delight! The circle of life here is complete with the existence of its rich diversity of wildlife. An excellent chance to meet in person the proboscis monkey, rated as the major star of the wildlife show. Supporting cast are the long tailed macaque monkeys, silvered leaf monkeys, monitor lizards and the bearded wild pigs that loves to stroll around the chalets and camping site everyday. Photo taking opportunity with these gorgeous animals is never at stack.
Bako has its share of walking trails that offers jungle hikes too. I would reckon the Telok Delima and Telok Paku trails to see Bako's vegetation. If you have the chance to experience the thrill of night hiking here, it would be one of the most wonderful hike you will encounter! The memory of that unforgettable hike 5 years ago still tingles in my memory. Our soft footsteps echoing the forest floor, lights flashing to lead the way as we made our journey to the other side of the beach. Once we stood still in the dark to get a thrill of the night in silence. But we were wrong, as the jungle never sleep at night. The glowing mushrooms matched the nightlife's orchestra, forming a perfect symphony.
Besides Bako National Park, situated 30 minutes away from the Kuching town are the Mount Santubong, Damai Lagoon Resort and the village of Buntal where you can taste the mouth watering seafood at a price you can't resist. The Sarawak Cultural Village located at Santubong portrays and conserves the multi-racial and multi-culture of Sarawak ethnic groups such as Ibans, Bidayuhs and Melanaus.
It was wonderful to be home again after living an urban life in KL. Things are just different in Kuching. Captivating me once again with a smile.

Wedding embraced by the sea