A Late Night Visit to the Great Mall 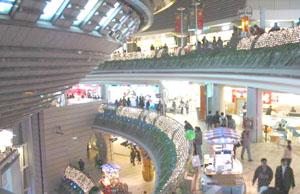 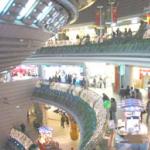 Don't go sharpening up your keyboards ready to pounce on my editor for letting a glaring typo slip into the title. This isn't an article about a drunken late night jaunt along the longest man-made structure in the world. That would have been far more culturally edifying than last night's trip to "Core Pacific City," The newest, largest, and hands-down weirdest shopping mall in Asia. Standing at the bottom of the impossibly long escalator that would take me into it's heart, which is basically a mutant golf ball a dozen floors high, I thought of what Richard Nixon might have said.

Dick Nixon wasn't a big fan of flowery prose, and neither am I. But Core Pacific city probably wouldn't have inspired much better from Walt Whitman. It's a great mall, for sure, but only if we stick to the most basic definition of the word "great," as in "pretty god damn big." Core Pacific city bills itself as "The Living Mall," and after two hours there, I can only imagine that it's lack of a functioning crematorium or cemetery earns it the title. Once inside its cavernous enormity, you can shop, bowl, eat, play pool, roller-skate, sing karaoke, and as the place is open 24/7, probably sleep, if you're discreet. However, should you happen to expire here, you'll need to be interred elsewhere. This is, after all, "The Living Mall."

And don't let the word "mall" mislead you. Place of business and recreation it might be, but from the outside, Core Pacific Mall looks nothing like the ten thousand or so malls that dot the landscape from sea to shining sea back home. Rather, it more closely resembles a biodome built by gigantic alien visitors than it does a place to buy slacks and go bowling. But unless the folks at Yunta / Core Pacific aren't letting us in on something, the place is of completely terrestrial origins.

"To enter one of architect Jon Jerde's developments is to stroll through a metropolitan kaleidoscope...his flashy, ultra capitalist venues thrill passersby, attract streams of tourists, and horrify the cultural elite."

The Taiwanese business community, while savvy in most instances, has always had a sucker spot for fast-talking foreign designers with strange ideas - the awfully pretty but trouble-prone section of the Taipei Rapid Transit system, designed by French company Matra, comes to mind. And the comparison, unfortunately, doesn't stop there; like the Matra section of the subway, Core Pacific City has been plagued by structural problems. Little things, mostly; Two floors of the mall remaining closed after the grand opening due to egregious safety violations, an ongoing a feud between the mall's management and the city government, who refused to grant the mall its operating license due to pesky "safety regulation," and a chunk of level B3's ceiling caving in on opening weeks. But those problems are all behind us as we enter "The Living Mall," primed and ready to...

Wait, we aren't actually in the mall yet, despite being 500 words into the essay. The clever reader will see this for what it is - a cheap journalistic trick used by me to create empathy between them and the subject, which takes an equally long time to enter. Getting from the street level into the Mall's interior lobby requires a two minute long escalator ride, most of which is spent going through a strange, neon-lit tunnel. Awestruck though you may be, just keep reminding yourself that you are going shopping, and not being taken via conveyor belt deep into the heart of an alien hive. Do not panic; those colored lights along the ceiling are there to soothe; they are not obscuring wall-mounted nozzles waiting to disinfect you for your visit with the Alien hive queen. Soon, you will be inside the structure, soothed, refreshed, and ready to shop.

But shopping for what? There's the rub. After the lengthy trip up the mystery chute, the rapt shopper expects to be greeted by some sort of futuristic smorgasbord of capitalistic delights - shops selling space age go-go boots, beauty salons offering haircuts out of "The Jetsons," or at least a few snack bars hawking Soylent Green. But there isn't any of that. After a few loops around the mall's ever-curving, womblike interior, it dawns on the shopper that Core Pacific City doesn't offer anything that couldn't be experienced at twenty different venues around Taipei city. "The Living Mall" boasts 15 floors with over 900 retailers, eateries and various other places where the visitor can pay to be distracted from the banality of life. There are bookstores, food stores, lounges and pubs, a bowling alley, Karaoke, McDonalds, Dim Sum, at least five stores selling the ugly Frankenstein shoes so beloved by Taiwanese women of the 16 - 24 demographic, and much more.

The young couple out for a night of fun, fashion and a healthy credit limit workout can find all that at the Hsimending pedestrian mall without having to pass through a neon-lit rebirthing tube to get there. And Hsimending has its own subway exit and thirty varieties of meat-on-a-stick snacks (amenities which Core Pacific City so far lacks). Tien-mu's Takashimaya department store has slacks, cosmetics and Frankenstein boots in abundance, and their food court is in a sensible, easy to access location (the basement). Takashimaya lacks the 24 hour buzz of CPC, but really... if you need to buy something at two AM in Taipei that you can't find at any night market, you might want to consider a change in lifestyles. In my opinion, the only interesting establishment boasted by The Living Mall is a 24-hour Eslite bookstore. But one has to wonder just what sort of people wind up gravitating towards a bookstore at four in the morning.

So basically, the Core Pacific Mall is an architectural oddity, or as Jerde's web site puts it "a spherical world within a world." Finally getting out of the mall and taking a long look at the mall's spherical grooviness, I was reminded of a story spoken in hushed whispers by members of a certain fringe religious sect, the legend of a race of gargantuan alien golfers who travel through the cosmos with nine-irons the size of skyscrapers, eternally in search of the perfect stellar green. While the legend is obscure, and its author most likely crazy, it seems an act of sheer hubris to build a mall in downtown Taipei that so closely resembles a gigantic golf ball. One must wonder just whose attention Jon Jerde's design is supposed to attract. His office is on Venice beach, California, well within the zone of fringe kook influence.

I'll conclude this article with another cheap journalistic trick that stops just short of out and out plagiarism. Rather than writing a final paragraph that sums up the Core Pacific Mall experience, I'm just going to clip a few quotes from some old review of one of Kevin Costner's more tedious box office flops:

"...Getting to the end of the thing took too damned long!"

Although written by someone who'd never even seen the place, these quotes sum up the "Living Mall" experience better than I could after spending the better part of an evening there.