Life on the Tonle Sap 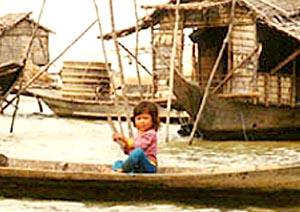 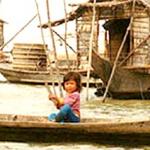 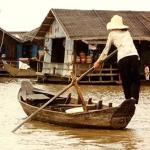 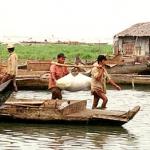 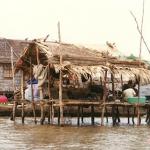 The Tonle Sap Lake is a wonder of the world. It is the largest freshwater lake in Southeast Asia. Its boundaries extend anywhere from 20 kilometers to as much as 50 kilometers inland and its depths increase from a mere two meters to as deep as ten. The Tonle Sap is more than just a body of water; for the people of Cambodia, this Great Lake represents a way of life. And life along the Tonle Sap hasn't changed much over the last century.

According to Gordon Sharpless of TalesofAsia.com, "The Tonle Sap is one of the most fish abundant lakes in the world and the silt deposits left behind by the annual floods have created fertile ground for agriculture. It's no surprise that one of Asia's greatest ancient civilizations developed near this lake and today much of Cambodia's livelihood still depends on its output. So dependent are Cambodians that the government vigorously enforces fishing bans from March to November."

Many people depend on the Tonle Sap and its ebbs and flows to maintain life and everyone in Southeast Asia recognizes this fact of life.

The people along the Tonle Sap are a happy people and life revolves around the flowing of their Great Lake. When the rains start in June or July, the water level begins to rise dramatically. Flood waters pouring out of the Mekong catchments basin from Tibet to Laos eventually force the flow of the Tonle Sap River. The Great Lake and the people that inhabit it, welcome the swelling tide which expands ten times in size. With the coming of October and autumn, and the tapering off of the monsoon rains, the waters begin to flow again southwards, through Vietnam and into the south China Sea. The people along the Great Lake celebrate this great change with festivals and carnivals that resemble what Mardi Gras is in the States.

Ninety percent of the village people are fishermen, and every day they rise by 5 a.m., as their great grandfathers did, untie their motorized skiffs, and head 5 kilometers up stream to reach the Great Lake by dawn. On some days, a family of fishermen can catch as much as 100-200 kilos of fish. These days of abundance make up for some of the slow, empty days that occur during the long monsoon where fishermen likely bring home very little.

For travelers who take boats up and down the Great Lake, life along the Tonle Sap is both humbling and admirable. The people along the Tonle Sap know the value of hard work and can be seen working the river and caring for their families with smiles upon their faces. The fishing skiffs that are scattered along the lake are in numbers of at least hundreds and each boat represents a glimpse of what the river life is like for these people. Some of these sights include men slinging their nets over their shoulders and over their sons, women preparing meals and fish products to sell, and children playing games or taking swims on the long, hot summer days. Every boat seems to have some type of business, serving food, a fruit stand, general store, a machine shop, and even a karaoke bar. On the Tonle Sap, everything floats.

Fishing is a way of life for families with make the Tonle Sap their home. Cambodian communities are heavily reliant on fishing for their food, money, and even their identities. Fishing is the beginning and end of life along the Tonle Sap and is a means of survival for most Cambodians. Whole families are involved in some part of the fishing, from the youngest to the oldest members. Tasks and responsibilities are shared in every area of river life.

Days that begin at dawn with the pulling of a net onto the boat, is just the beginning of a long day's work. Both families, neighbors, fathers and sons work together to free the fish from the net and empty them into the hull of the small open boat. Young men holding steel hooks haul heavy tatty bags filled with small fish to trucks hazardously parked on the banks of the Tonle Sap. The fish trucks, some looking like prehistoric or war vehicles without engine covers, trudge forward slowly under the weight of heavy loads of fish.

The fish are transported to family homes that have the basic fish paste processing equipment under their raised homes. The women and children take over the process preparing the fish, salt and ingredients to produce the fish paste highly in demand amongst Cambodians. Once cured, the popular fish paste is sold by family members from their homes and at local markets.

While fishing represents the central part of life along the Tonle Sap, the Great Lake is much more than fertile fishing ground. The river forms the heartland of Cambodia and represents a people who make their living and life with the richness of their land and the fruits of their hard labor. The Tonle Sap both feeds and irrigates more than half of Cambodia and represents a people and their history. The Great Lake is an ecological wonder of the world and will continue to maintain the people of Cambodia for centuries to come.

Hanging Tough: The People of the Forest