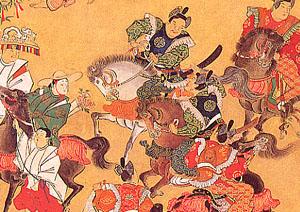 Image © 2003 Regents of the University of California 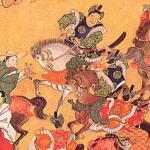 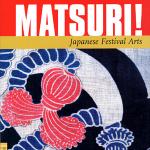 Late one summer afternoon, hearing laughter rising from the busy Tokyo sidewalk below my hotel, I peered down in the direction of the voices. A cluster of animated young men, identically dressed in white cotton kimono with bold blue designs, seemed to be heading gaily down the street. The day was an ordinary workday in Japan, which would typically call for sobriety and conservative business attire, so the lighthearted and playful attitude of the young men was surprising. Descending to the street, I learned from a passerby that they were headed for a nearby matsuri. Matsuri, it was smilingly explained, was the term for a Shinto shrine festival." -Gloria Granz Gonick, author of Matsuri! Japanese Festival Arts

Sprung from the warp and woof of a Japanese textile exhibition at the Fowler Museum of Cultural History on the campus of the University of California Los Angeles (UCLA), Matsuri! Japanese Festival Arts is an opulent and scholarly work by Gloria Granz Gonick, who earned her master's degree from UCLA's Department of Art History, specializing in Japanese design, language and culture.

With Gonick as visiting curator, the Fowler exhibition and its companion text is the culmination of her fascinating 11-year labor of love to collect and document Japanese textiles. The 2002 exhibition Matsuri! Japanese Festival Arts featured more than 250 richly decorated festival garments, artifacts and other works of art, including sculptures, screens, shrine adornments, prints, and banners used in the joyously chaotic Shinto and Buddhist festivals known as matsuri.

Eighth in a series of books on Asian textiles published by the UCLA Fowler Museum of Cultural History, at 9 x 12 inches and 256 pages, with 321 color illustrations and two maps, this hefty volume is divided into seven chapters, four of which were written by Gonick herself, with three others contributed by Yo-ichiro Hakomori, adjunct assistant professor in the School of Architecture at the University of Southern California; Hiroyuki Nagahara, assistant professor of Japanese in the Department of East Asian Languages and Literatures at the University of Hawaii at Manoa; and Herbert Plutschow, professor in the Department of East Asian Languages and Cultures at UCLA.

In his contribution to Matsuri! Japanese Festival Arts entitled "Politics and Theater in Matsuri," Plutschow defines matsuri as, "a Japanese word meaning festival, ritual, and rite. It derives from the verb matsuru, or to worship, offer, and sacrifice. Matsuri generally occur in the context of the Japanese religion called Shinto, but many matsuri were shaped by the combination of Shinto and Buddhism that has dominated Japanese religion for many centuries."

He goes on to say, "Generally, matsuri refers to an extraordinary time that the community periodically sets aside to allow its members to worship and commune with their god or gods. Matsuri is extraordinary because it entails behavior that is truly out of the ordinary. It allows people to eat and drink extraordinary food and dress in extraordinary fashion; in other words, they may behave in a manner not allowed during regular times."

To truly comprehend and appreciate the Japanese festivals known as matsuri, one must witness the spectacle firsthand. However, Gonick's sensual description is almost as good as being there.

"Just moments later, the aural onslaught recedes in importance in the face of an oncoming spectacle of color and pattern, shifting and floating before one's eyes. Soft billboards of heavy cotton, dyed with indigo and emblazoned with bright white Japanese kanji (Chinese-derived characters) ripple skyward. The lengthy banners (nobori) strung high on bamboo poles, grandly announce the name of the festival...Bystanders line both sides of the street, avidly seeking perches on top of walls or along stairways with high visibility for the coming procession. As night descends spectators pour over the sidewalks and bend from overhead balconies, all straining toward the far end of the street... As crowds continue to grow thicker, no one seems to be concerned about stepping on a fellow celebrant, balanced on tiptoe. The willingness to touch and be touched by strangers in what is usually a self-contained and very private society is striking. Totally engaged, spectators of all ages - seemingly oblivious to being rustled and shoved - vye good-naturedly for the choice spots, appearing as one in their determination to fully absorb the coming spectacle.

Jangling gongs and bells, piercing notes of flutes, and the rhythmic and continuous thunder of drumbeats herald the arrival of the first wagon to round the bend, preceded by its entourage of priests and escorts. Bands of musicians (hayashi) and festival dancers, some self-accompanied with hand drums, triangles, cymbals and bells, can be heard approaching from blocks away. The gilded sculptures and lavishly costumed mannequins on the wagon enjoy a rousing reception comparing favorably with that bestowed on rock musicians at other times and places. This vibrant moving exhibition, produced and manned by neighborhood devotees, receives an increasingly clamorous ovation as the wagons slowly roll by on their huge wooden wheels."

In her introduction, Gloria Granz Gonick describes in great detail, the spirit of the matsuri celebrations, and traces the history of Japanese matsuri from their "earliest beginnings of communal life in Japan," through the shogunate era to the Meiji restoration and their continued reenactment in contemporary Japan. Sections on Buddhism, Taoism and Confucianism demonstrate not only their impact on the matsuri themselves, but also on their significant influences over Japanese history, culture and style.

In the chapter entitled "The Sacred and the Profane in Matsuri Structures," Yo-Ichiro Hakomori examines the subtleties of space and construction inherent in the portable matsuri shrines. With matsuri as metaphor, Hakomori examines the physical as well as the abstract structure and symbolism of all their various elements, thus offering the reader much deeper insight beyond the mere visual experience. And Hiroyuki Nagahara's chapter on "The Symbolic Meaning of the Inscriptions on Japanese Festival Jackets," sheds much-needed light on the cryptic calligraphy common to many of the garments and banners on parade in a typical matsuri.

But as its cover so boldly promises, the centerpiece of Matsuri! Japanese Festival Arts truly is the textiles. Page after page of brilliant photographs depicting Japanese hanten, kimono, and yukata, some of them virtually microscopic, dazzle the eye with their exotic elegance. And their arrangement within the text facilitates an easy transition of the left-brain-right-brain shift between reading and simply enjoying the pictures.

As a fine art book, Matsuri! Japanese Festival Arts is a feast for the eyes. As an academic text, it is impeccable. The depth and scope of the panoptic research entailed in its writing is evident in every single paragraph of text, and in each and every one of its 321 captions. A work to be treasured by Japanophiles, historians, collectors, textile aficionados, and anyone who appreciates a truly beautiful book.