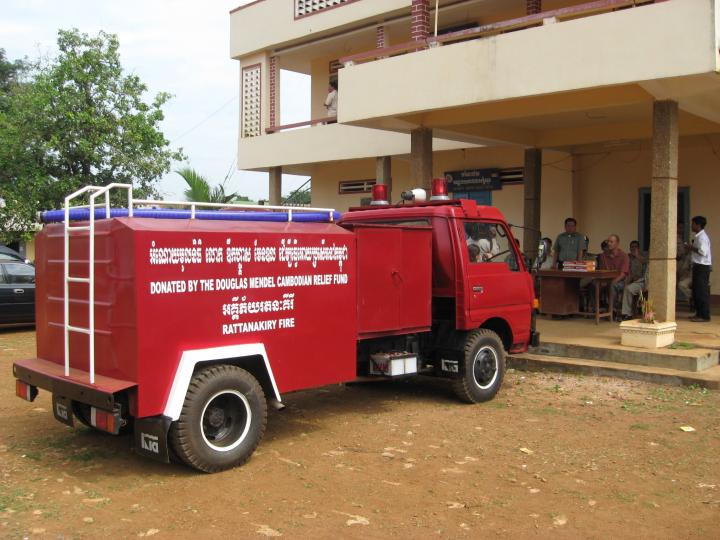 The fire truck at the station in Ban Lung, Ratanakiri Province, Cambodia for the ceremony Nov. 9, 2007. 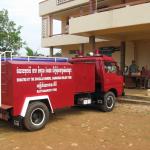 My first visit to the beautiful province of Ratanakiri, Cambodia was in October 2004. I was awestruck by the gorgeous scenery, the rolling hills, the waterfalls and various hill-tribes. Yaklom Lake is  a lake a few kilometers outside of town that is a great place to relax, swim, walk the 5 km perimeter and visit the environmental center.

Even though I was enjoying the incredible vistas, people and uniqueness of the province, the main purpose of the visit was to visit the fire station in the provincial capital, Ban Lung. I have a non-profit that helps the fire stations in Cambodia. I wanted to evaluate the needs of this rural station, over 300 miles from Phnom Penh, the capital of Cambodia.

It was very beneficial to introduce myself to the Major in charge of the station, and see what he would like for his 7-8 firefighters. During the 2 trips in 2006 and early 2007, I was able to donate fire extinguishers, bunker gear (pants, coats, helmets, gloves) and radios. The gift that the Major wanted the most though was a fire truck.

I had delivered a donated a fire truck from Colorado to Sihanoukville, Cambodia in 4/06. I knew that I could have a fire truck built in Phnom Penh for a third less money than it cost to ship one from USA.

Two Cambodian friends (the Captain of the station in Phnom Penh and a good friend of his) were commissioned to take on the project of building a fire truck. During a 5 month period in 2007, the dream of having a fire truck built became a reality. Pictures were taken to document the endeavor of building a fire truck. It has a 2500 liter water tank, a pump for drafting as well as pumping water, 5 sections of hose, 2 nozzles, lights and siren, a compartment for gear and the custom red paint job. A true Cambodian beauty!

In August 2007 the fire truck was completed and 3 firefighters from Ratanakiri Province made the journey to Phnom Penh for a few hours to train on their new fire truck. It took 2 days to drive back to Ratanakiri. It is about 250 miles on pavement with about 60 miles on dirt. Since it was still the rainy season, it was slow going on the bumpy, pot-holed, dirt stretch the last 60 miles or so to Ban Lung. Fortunately, the fire truck and 3 firefighters made it without incident.

A ceremony was held when I arrived in November 2007. About 30 people were present and it was a great feeling knowing that Ratanakiri is a little safer with the new addition of a fire truck. With the dry season from November-May, the 7-8 firefighters are extremely happy to have one more fire truck to better protect their community.

Images of Tingri and Gyantse

Images of Cambodia: The People