Putting My Feet Up in Hanoi 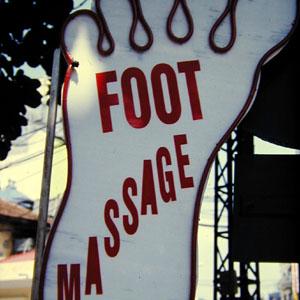 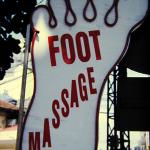 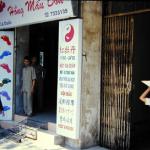 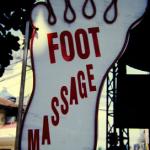 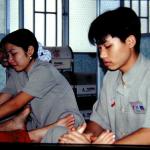 After a hard day in Hanoi I like nothing better than sitting back and putting my feet up.

I do this at my favorite foot-massage joint down on Le Duan Street. This particular establishment-which goes by the name of Hong Mau Don-devotes itself exclusively to foot-sore clients like myself in need of a little podiatric rejuvenation.

My Australian friend Max-proprietor of the popular Kangaroo Café down by Hoan Kiem Lake-first introduced me to the joys of a Hong Mau Don foot massage. On a steamy May afternoon we caught a taxi over to the parlor with Syd and Wendi, an Australian couple enjoying an extended vacation in Vietnam. In going as a group we followed the local custom, which views foot-massages-and virtually everything else in Vietnam-as a communal experience.

Upon our arrival at the parlor a staff member ushered us into a room equipped with black leather recliners set up in a soldierly row. Though we all looked longingly at the recliners, he instructed us to sit on the stools set out in front of them instead. A second staff member asked what we wanted to drink and then served up a round of Coca-Cola and Heineken.

At this point a squad of five young masseurs and masseuses arrived and took up station behind us. I found myself in the capable hands-quite literally-of a masseur named Thien. Like all staff members at Hong Mau Don, he wore an olive cotton uniform with the company logo-a little red footprint-emblazoned on the breast. The outfit looked like a cross between a military uniform and a judo robe, which I would soon discover to be an appropriate style given the almost martial approach to foot massages taken by the masseurs and masseuses at Hong Mau Dong.

I removed my shoes, which Thien cached in a special plastic bin, and watched as he placed a pan of rust-colored water at my feet.

It's a toe-jam eradicator," Syd said, looking down with a dubious expression at his own personal water pan.

Ominously, all of our pans had electrical cords, which led me to conjure up gruesome tales of radios dropped in bathtubs. Thien gestured that I should put my feet in the ankle-deep water, so like I so often do in Vietnam I just decided to put my best foot forward and see what happened. Beside me my friends did the same, unphased by the shock hazard or the way the medicinal herbs dissolved in the water had rendered it such an unappetizing color.

Meanwhile Thien turned his attention to the various appliances in the room. First he tuned the wall-mounted color TV into the Vietnamese version of Wheel of Fortune, which muted the drunken conversation of the Chinese businessmen getting massages in the next room. Then he switched on the electric fans, and the sudden swirl of air smelled faintly of gymnasiums-a mix of sweat and disinfectant.

Thien finally picked up my pan's electric cord and leaned towards the wall socket. I thought, Here it comes. Then I braced myself as he plugged in my water tray. Rather than a sudden jolt, I felt my feet thrum gently instead as the floor of the tray vibrated like some kind of miniaturized carnival ride. Tiny waves rippled on the surface of the warm water as the muscles in my feet began to relax.

"What do you think of the de-whiffyfier?" Max asked me, pointing at my water pan.

As my feet received their cleansing vibro-massage treatment, Thien went to work on my back, head and shoulders with hands that can only be described as hydraulic in their strength. Beside me Max got the same treatment from a pretty masseuse named Ms. Nhu, whose hands opened and closed like velvet-lined mechanical clamps. This upper-body massage involved not just the usual pressing and rubbing but also an outright pummeling with the sides of Thien's and Ms. Nhu's hands. In fact, together our four massage masters pounded away like a quartet of over-enthusiastic drummers playing their favorite rhythm.

I marveled at the way our masseurs and masseuses synchronized their work with a precision worthy of a military drill team. Acting on a cue known only to them, they gave our backs one final whack, then began smacking us upside the head in a coordinated slapping that made a sound like an audience clapping for a good performance. This knocking about left me feeling pleasantly stunned, which was no doubt the point, but only seemed to work our torturers up for more.

Thien directed me to pull my feet from the electro-shock tray and settle into my leather recliner. Languidly, I put my freshly cleaned feet up on the stool as my masseur moved the herbal-bath tray aside. I appreciated the rusty opacity of the water, for I figured that aside from any medicinal qualities the herbal infusion might offer, its oxidized color quite tactfully masked the grime that had no doubt come off my feet.

I sat back, sipped my ice-cold Heineken, and watched the Wheel of Fortune spin. I looked along the row of recliners and saw our eight foreign feet lined up like recruits for inspection. Drill sergeant Thien went to work on my feet and lower legs, clearly intending to whip my sorry foot soldiers into shape. Smiling all the while, he pulled, tugged, rubbed and twisted the bones and muscles of everything below my knees. As a coup de grace, he rubbed in a medicinal lotion that left some parts of my feet tingly and others numb as a shot of Novocain. An assistant masseuse brought in a set of steaming towels just as Wheel of Fortune gave way to the World Cup game between Cameroon and Ireland. Like some kind of medieval torturer, Thien pressed these superheated towels to the soles of my feet and gave me what can only be described as a Vietnamese hotfoot. I struggled not to wince, knowing that iron-man Thien had applied the towels with his bare hands, then ended up smiling as the heat of the towels seeped into my feet like some kind of anesthetic. Given how good I felt, I wondered if this perverse heat treatment had caused my body to release the same euphoria-inducing endorphins that it did when I ate food spiced with Vietnamese chilies.

Thien followed up the hot-towel treatment with another extensive massage of my legs. He conducted an athletic realigning of my leg muscles and tendons while simultaneously rooting for Cameroon. I shuddered to think what he might do to me if they lost. It hardly surprised me that Thien remained a hardcore football enthusiast, given the name of the sport-nobody calls it soccer in Hanoi-and its reliance on kicking, running and general use of well-tuned feet.

Still operating in complete synchronicity, Thien and his colleagues dried our feet with a flourish of orange towels, murmured "finished" in English, and marched off in their olive uniforms like a squad of well-drilled soldiers returning from a mission into enemy territory.

As for me, I'd melted into my lounge chair and become 140 pounds of over-massaged pleasure. My friends appeared to be unconscious, their expressions blissful. My feet felt so good that I didn't want to spoil things by standing on them. I was like someone with a new car who doesn't want to drive it anywhere for fear of putting miles on it. When I finally did rise to my feet, I felt like I was walking on air.

To thank Max for introducing us to the joys of Vietnamese massages, my friends and I offered to foot the bill for him. The hour-long massages cost 50,000 dong per person, which worked out to just a $1.65 per foot (plus a dollar tip and a buck for each beer). All things considered, I reckoned that to be one of the best deals going in Hanoi.

Syd enthusiastically agreed. "It was supposed to be a foot massage and we got a full body massage," he said. "I quite enjoyed it."

"I thought it was lovely," Wendi added. "The premises were really clean. The staff was very friendly and very well attired. I could've had a bit more work on the right foot, but other than that I thought it was really nice."

So given the price, why not get a group of friends together and hoof it on down to the Hong Mau Don for some fancy footwork? After all, you don't have to be well-heeled to enjoy a foot massage, though you'll certainly feel foot-loose and fancy free once its over.

The Hong Mau Don foot massage parlor is at 5 Le Duan Street (look for the sign with the multicolored footprints) and is open from 11:00 a.m. to 11:00 p.m., seven days a week. The parlor is an easy walk from Hoan Kiem Lake, but on hot days a taxi or xe om (motorbike taxi) is a better bet. Telephone: (08) 733-3139. If you're feeling a bit peckish after your foot massage, head over to the nearby Kinh Do Café 252 for a bite to eat. The café can be found at 252 Hang Bong Street and offers an eclectic menu, including a variety of pastries and other baked goods.