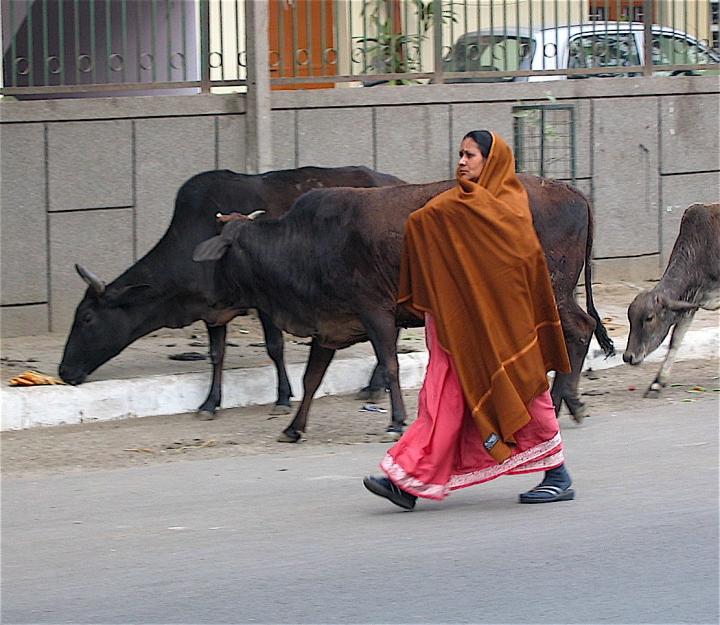 A woman goes for a walk in downtown Delhi 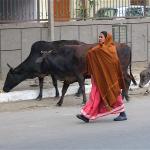 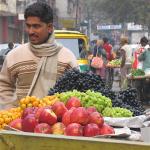 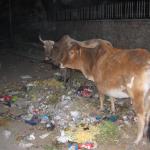 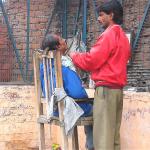 Delhi assaults the senses. Take a stroll through Delhi and your nose twitches from the strong smell of human urine, animal manure and rotting garbage. Your eyes widen at the sight of so many bright bold colors in people’s clothing and headpieces. The blaring horns of trucks, cars, buses and motorcycles deafens you. Your taste buds are tickled by the scents of curry, garlic, and red chilies emanating from endless food stalls. Beggar children grab you with their rough, dirt caked hands and roaming dogs sniff your legs.  Delhi constantly bombards you with unique and often disturbing sights, sounds and smells. After a week there I was definitely suffering from sensory overload.

However my first morning in Delhi as I walked through the streets with my husband Dave everything was still an exciting new adventure. The first thing I noticed was the cows. They ambled slowly down the middle of busy streets. Rickshaws, pedestrians, bicycles, taxis, buses and carts swerved out of the way to avoid hitting them. Cows of every color, size and shape were standing on corners and in intersections munching on choice tidbits from the endless piles of refuse. At one point Dave wasn’t watching where he was going and literally walked right into a chocolate brown bull. I gasped as his huge horns almost grazed Dave’s cheek.

Four stories above the street I saw a middle-aged woman standing on her balcony putting henna in her hair. She had a mirror and a pot of henna perched on the balcony edge. Since Delhi’s electrical power supply is often unreliable she was taking advantage of the morning light to complete her beauty routine.

Boys and girls dressed in their immaculate school uniforms passed by in pedi-cabs powered by the pumping legs of wiry, muscular bicycle drivers. The young people were obviously on their way to classes, some intently studying textbooks as they rode. A white haired man with a brown stained turban on his head, and spectacles perched on his nose, sat on his front step reading the newspaper.  A barber had already set up his old wooden chair and cracked mirror on the street and was getting ready to lather his customer’s face for a shave.

Ladies in vibrantly colored saris were on their way to market, many with clay pots or straw baskets balanced on their heads. Fruit and vegetable sellers were parking their carts along the streets preparing to open for business. In food stalls naan bread was being baked, spicy chicken grilled and brown peanuts roasted.

It was cool but the air reeked and no wonder. I passed dozens of men, their backs turned to me, urinating in the gutters or against the walls of buildings. Pigs, goats, sheep, dogs, donkeys, elephants and camels were depositing excrement everywhere.

The people who had slept on the streets were waking up, crawling out of the little blanket tents they’d erected in the middle of the sidewalk or on the traffic lane dividers. These were choice spots since the exhaust from passing cars provided extra heat to take off the chill of the night air.

Looking up I saw monkeys cavorting on the rooftops and a goat on someone’s balcony chewing on the morning paper.

We arrived back at our hotel. Our fifteen- minute stroll through the streets of Delhi had all my senses tingling. It was early in the morning but I was definitely awake!