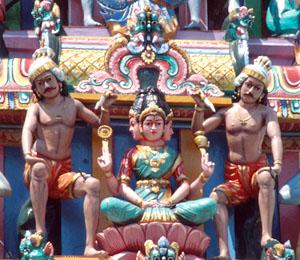 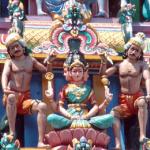 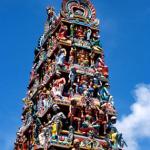 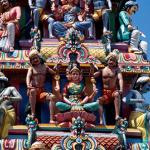 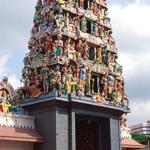 In the heart of Chinatown, fully in-keeping with Singapore's multicultural atmosphere, is the Sri Mariamman Temple, the oldest and most important Hindu temple in the country. The splendid gopuram over the main entrance on South Bridge Road is perhaps its most eye-catching feature and sets it apart from the neighbouring pagoda-roofed buildings.

The temple is built in Dravidian style, reflecting the fact that the majority of Singapore's Hindus are of South Indian descent. Sri Mariamman, to whom the temple is dedicated, is also popular in South India, where goddesses are addressed as "amman," or mother. She is believed to be able to cure illnesses, such as smallpox and cholera. The fact that the first Hindu temple in Singapore was dedicated to her suggests what living standards were like at the time.

The temple was established by a young Indian called Naraina Pillai, a clerk of the East India Company, who accompanied Stamford Raffles on his second trip to Singapore. Pillai rapidly established himself in business and became a community leader. In 1822, he was appointed Chief of Indians and was given the power to settle disputes among the Tamils.

Originally, the English East India Company's allotment of land for a Hindu temple was in Telok Ayer Street but there was no fresh water supply for washing rituals. The present South Bridge Road site was finally granted in 1823. By 1827, a wooden temple was built and this developed into a plaster and brick structure in 1843. The gopuram was established in 1863 although it was a plain and simple tower until it was renovated in the 1930s when the decoration was added. According to Hindu Sastras, a temple must hold a kumbabishegam (consecration) ceremony every twelve years; the first was recorded on 29 June 1936 and the most recent was in May 1996.

The temple has always played an important role in the Hindu community of Singapore. When the first immigrants arrived in the 19th century, it was used as a place of lodging until they found work or an abode of their own. It has also housed the Registry of Marriages and is still the preferred choice for weddings among Hindu families. The Temple Committee has always been highly influential in the community and has continued Pillai's role as settler of disputes.

The temple's most important festival is Thimithi, the fire-walking festival. It is dedicated to Draupathi, heroine of the epic poem, the Mahabharata. Legend has it that she had to prove her innocence and fidelity by walking barefoot over hot coals.

Thimithi is held in the month of Aipasi, which is between the solar months of October and November. Celebrations begin at the Sri Srinivasa Perumal Temple in Little India around 2am and a priest leads a grand procession through the streets. The fire-walking usually begins around 5pm and the priest is the first to brave the four-metre long pit of embers, followed by other fervent devotees. This forbidding ritual celebrates the participant's faith and is said to fulfil his wishes. The scene attracts hundreds of spectators and an extra walkway was added along the boundary wall on Temple Street to accommodate the crowds.

Another feature that draws the visitors to the temple is the elaborate gopuram over the entrance. Its prominence over nearby buildings meant that worshippers could see it from afar and therefore offer prayers even whilst away from the temple. Although nowadays, with taller office blocks in the vicinity, you have to be pretty close to the temple in order to see it.

The five-tiered tower is crowded with figurative sculptures of gods, goddesses and beasts; on each side are various images of the goddess, flanked by her attendants. The bright shades used in the depictions are not chosen merely for decorative purposes, as colours have great significance in Hinduism. The deities are most often portrayed in colours that reflect their characters. For example, Lord Vishnu is usually in yellow, which represents knowledge and learning and Lord Krishna wears blue, which signifies bravery and manliness.

Below the gopuram are two large wooden doors, which lead into the temple. These have small bells hung on them which the visitor is to ring upon entering, informing the gods of his arrival, and on exiting, alerting them to his departure. Bananas are also hung outside as a symbol of abundance.

Just inside the doors is the ablutions area for the pre-prayer cleansing ritual. Shoes are not to be worn inside the temple and there is usually an attendant on hand to remind visitors of this. Non-Hindus are welcome to visit the temple, as long as it is respected as a place of worship. Signs, in several languages, politely ask visitors not to proceed any further than the mandapa, or hall of worship, and a donation of $3 is requested should you wish to take a photograph. It is reassuring to see the spirit of enterprise alive and well.

A covered walkway connects the gopuram to the sanctum, which was built in 1916. The ceiling of this walkway is adorned with frescoes and painting of deities. An aisle leads to the statues of three deities. Worshippers attend the central figure first, followed by the ones on either side. The devotee sprinkles water on himself to purify himself before he offers his prayers.

On either side of this central mandapa are open courtyards, although visitors are requested not to enter into these areas. For those who may walk round the temple, this should be done in a clockwise direction and an odd number of times for good luck.

Atop the boundary walls of the temple are figures of nonchalant-looking cows, gazing steadily at the streets below. The clean, cream walls are in keeping with Chinatown's modern, sanitised look. The temple receives a steady number of visitors and you are made to feel welcome, more so than at some of the other Hindu temples which are more off the beaten track in Little India. And, as most visitors to Singapore make the trip to Chinatown, then the Sri Mariamman Temple can easily be added to the itinerary.