Tales from a Cambodian Train 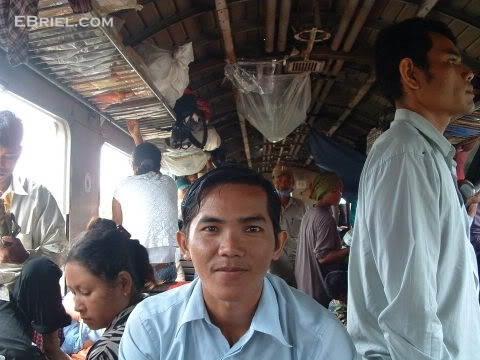 Richard on the Battambang train 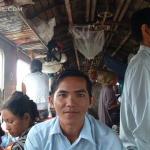 NB: Story and images from 2005. This train no longer runs in Cambodia

Trains in Cambodia are a mystery for the tourist: online information is widely inconsistent, and most travel agencies will tell you they don't run anymore. If an agent admits that, yes, trains actually depart from the station sometimes, they'll have no idea when they run, or exactly where. They'll rarely know the station's business hours, either, and neither will you.

On my two visits to the station during their posted hours, there wasn't a single employee to be seen. My only company was a scattered group of transients, sleeping on benches; you'll see their equivalent in every train station around the world.

Somehow these frustrations only increased my determination to ride the famously decrepit train from Phnom Penh to Battambang. For three mornings in a row, I walked to the station from a nearby guesthouse, and waited. "No train till Friday," I was told the first day. Uncertain of the translation, I went back the next morning. And the next.

Finally, I had it from two employees - in different parts of the station, and written in both Khmer and English - that the train would depart on Saturday morning, at 6:20am.

As I walked down the track, I saw several passenger cars, one car without a roof, and then two "cattle cars" for cargo and, today, passengers. These seemed to have the most room, so I climbed up and in.

View from the cattle car

Everyone stared, as they always will outside of major tourist areas. Then they smiled, as they usually will. But when a bullish-looking man wearing a cowboy hat got on the train, they wouldn't look at me anymore.

Cowboy surveyed our cargo carriage, and took off his shirt. There were fifteen passengers: an extended family, a railway employee, and me. Our belongings hung on nails haphazardly stuck in wooden slats. We all sat on the grimy floor, our clothes protected by mats (the family) and a plastic bag (me). Cowboy gave me a giant smile, unknotted a hammock, and straddled it. He now had the highest and most comfortable seat in the car.

For two hours, the train was connected and disconnected to the engine. We rolled into the countryside and back to the station, never exceeding 10km/hour. Passengers accepted it stoically, and gnawed on baguettes. Finally we were off. Our car was directly behind the engine, and its frequent horn blasts rattled my eardrums. Now I understood why everyone was concentrated at the other end of the carriage. I stuffed small wads of wet tissue in my ears, a trick from years spent clubbing in my 20s.

The train made its first stop. Dozens of people rushed amiably into our car. I made myself as small as possible to get out of their way, staying near the door. Cowboy stood up, his torso meaty but barely-defined, pushed back his hat and pointed at me. Now, it's true, I don't have a working knowledge of Khmer, but body language is easy enough to decipher after spending some time in a country. His was patently aggressive.

"Baraing!..." he shouted. Foreigner. Then words I didn't understand, as he gestured at me like a maniac. "...Khmai!" Cambodian. Something about where and how I was sitting disturbed him. He waved at the entire car. Pointed at me again. Laughed. Passengers' faces were frozen. Then people began to laugh with him. Their laughter grew higher-pitched as he went on in Khmer, repeating "Baraing...Khmai!" as though preaching to a congregation. He threw a dirty white skirt - salvaged from somewhere in the car - onto my knees. Suddenly I realized the passengers were hysterical - with fear.

Cowboy had a silent sidekick. In constrast to the shirtless, sweaty Cowboy, Sidekick was a square-faced man wearing an expensive pin-striped shirt and tailored black trousers. Sidekick stood stiffly in the center of the carriage. No hammock for this guy; he was highly alert and ready for anything. Soon, Cowboy began to wander around the car, collecting 3,000Riel [US$0.75] from everyone.

I handed him my ticket. He unfolded it and grinned. Proselytized again to the entire car about "baraing". I knew the foreigner rate I'd paid was three, even five times, as much as the other passengers. I snatched the ticket away and put it back in my pocket. "Be very careful," said a teenage boy who crouched at my side in the packed car. I nodded, looking away. No one spoke but Cowboy in the heavy, silent air, punctuated only by the train whistle.

"Why are they collecting the money?" I whispered to the boy, though I knew full well what they were doing. "For protection," he said, and picked at his toes, eyes safe from Cowboy's gaze.

Cowboy also spoke a bit of english. At the next stop, just after 9am, he bought three cans of Crown beer, an extra-strong swill formulated for a quick buzz. He opened one and sniffed it.

"Strong!" he cried, flexing his arm, which sprang to life beneath a layer of fat. He shoved the can in my direction. "Strong - you drink?" he asked, showing off his english for the benefit of other passengers. I didn't respond. Pinstripe glared. His eyes didn't leave mine alone for a second.

Cowboy then stuck a straw in the can and sucked away contentedly. Though that's how beer's drunk here, it's hard to take a man seriously when he's drinking beer with a straw. Still, I knew I had to get out of the car; there was no way I'd spend twelve more hours in that explosive atmosphere. And I knew my presence made things worse for the other passengers. I'd packed little luggage to speak of, just my purse and a small backpack, knowing I'd need to be mobile if something happened on the train.

The few foreigners who ride Cambodian trains to experience travel as many rural Khmers do. You'll find none of the comfort or the speed of coaches that traverse the country's tourist destinations. Of course, Cowboy was a reminder that baraing will never really experience travel in the same way as Cambodians.

Though I was a target, I was luckier than the other passengers in that car: I could leave.  So I did. At the next station, I jumped off and walked as far as I could, to the other end of the train. Every carriage was filled with people who spilled into aisles and down steps, between cars and onto the rooftops.

I climbed up the last car, hoping Cowboy and Pinstripe didn't have any accomplices on this end.

"Hello," said a young man. "What are you doing on the train?" He wore a freshly starched blue shirt and khaki trousers. "My english name is Richard," he said, and shook my hand carefully. A university student in Phnom Penh, he was travelling to see family for the Pchum Ben festival.

"That's why there are so many people on the train," he added. "Most people here are government employees. They have a long holiday now."

Two young women giggled and made room for me on their wooden bench. Once, apparently, the bench had had legs, but now it was bolted to the floor. We perched half-on, half-off the 2-inch ledge. They all worked at the clothing factories at the edges of Phnom Penh, and made a respectable salaries compared to what they had earned in their home villages.

Cambodian train brakes are anything but subtle: the train slows, stops, then lurches violently at unpredictable intervals. Passengers crashed into one another, fell over benches, slipped in the muddy aisles. Packages tumbled from shelves overhead. Each time, everyone shrieked, then laughed uproariously at the aftermath as they got to their feet again.

I felt a hard tug at my hair. Turned around to find a toddler behind me, held on wobbly legs by his great-grandmother. He drooled constantly; it trickled slowly onto his shirt. She spoke to us as she wiped it away. "He's been like that since he was born," Richard translated.

The young man across from us made everyone laugh with his antics, particularly the teenage girls. He lived in Pailin, and was travelling with his father, a polite man who occasionally squeezed between our knees to smoke between train cars. I thought the old man might speak French, but didn't attempt it. French in Cambodia can be viewed with as much resentment as Russian in former Eastern Bloc countries.

A uniformed guard strolled by occasionally with an automatic rifle slung over his back. I wondered if he ever made his way back to the cattle cars, and thought probably not. Perhaps he'd been paid off by the Crown-swigging Cowboy.

Improvised train used by villagers for transport during the week

At twilight, I wandered through passenger cars, looking for one with electricity. None of the lights worked.

The conductor sat me near two Scandinavians after sunset, and told us to stay in the same car. He'd worked for Cambodian Railways since the fall of Pol Pot in '79, and said the Battambang line ran once a week in each direction. "From Phnom Penh on Saturdays, and back to Phnom Penh every Sunday."

"What time will we arrive?" I asked, thinking he'd be an expert on train times by now. But of course I'd forgotten that our arrival time wasn't up to him. "Maybe ten, eleven, twelve," the conductor grinned, turning on his flashlight. "Depends on the train, track, how many stops for how long, how many passengers." He waved his hands in an arc that encompassed all these variables and any others that might befall us.

The train jerked to a halt. "Excuse me," he said, and sprang to the window, shining his flashlight outside the car. "Be sure to hold your luggage," he said as he walked to inspect the rest of the train. "Many people can take it." There weren't too many people left on the train, though, and most of them were dining in the dark.

He considerately sent a younger employee to keep me company - though I hadn't asked for any - who held out an earbud attached to a very expensive cameraphone. "Here," he said. "Listen!" I heard screeching guitars and anguished male voices.

"Oh, Khmer rock-n-roll," I said. "Yes," he nodded. "Now I call my mother. She lives in Battambang." I handed him the earbud. "No, no, you use it," he insisted, so I stuck it back in my ear. I listened to them chatting for a few minutes in a language I couldn't understand. Her voice sounded concerned yet gregarious. After he clicked off, he smiled into his flashlight.

"You tired?" he asked me. I nodded. "I don't know what you call this in english," he said, and unrolled some fabric hanging next to the window. "A hammock!" I cried. "Really?" "Sure," and he patted it free of diesel dust.

The train rocked from side to side, seemingly ready to fall off the tracks. I quickly learned to keep a tight grip on the window ledge; when the hammock swayed too far, I'd crash into the broken plastic siding around the window.

Those last few hours were the most pleasant train trip I've ever taken. An ancient man played his tabla in the aisle, candlelight flickered from the far end of the car, turning the space cavernous. Fresh air rushed through the window as we sped past fireflies and rice fields.

[originally published at http://elizabethbriel.blogspot.com in 2005]

Sleeping Inside a Camera

I've Got My Eyes on You (photo-essay)