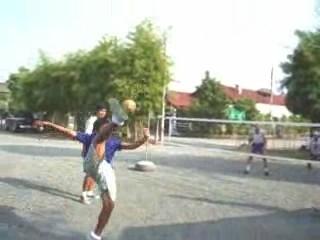 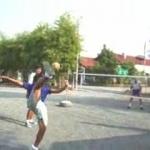 This is a very thrilling, fast paced game and seeing how the players 'spike' the ball is incredible. With a skillful timed leap, a spiking player will execute a lightning fast bicycle kick that sends the ball rocketing into the opponent's court then somehow manages to land on his feet.

An immensely popular sport native to Southeast Asia is Takraw resembling volleyball, except that a rattan ball and the technique only allows players to use their feet, knee, chest and head to touch the ball. It is a popular sport in Thailand where it is known as "Takraw", in Malaysia, ("Sepak Raga"), Indonesia ("Sepak Takraw"), Laos ("Kator"), Philippines and ("Sipa") Myanmar ("Chinlone"). The game evolved over several hundred years. In Bangkok, murals at Wat Phra Kaew depict the Hindu god Hanuman playing Takraw in a ring with a troop of monkeys. Other historical accounts mention the game earlier during the reign of King Naresuan of Ayutthaya. The game remained in its circle form for hundreds of years and the modern version of "Sepak Takraw" began taking shape in Thailand sometime during early 1740s. In 1866 the Siam Sports Association drafted the first rules for Takraw competition. The game became so imbedded in local Thai culture that an exhibition game was staged to celebrate the kingdom's first constitution in 1933. By the 1940s, the net version of the game had spread throughout Southeast Asia and formal rules were introduced. International play is now governed by ISTAF, the International Sepak Takraw Federation. The King's Cup World Championships are held every year in Thailand. While there are certain basic rules to Takraw, the game varies according to the type of Takraw being played as well as the place where it is played. In Thailand games are played almost everywhere and in every available space including in the courtyards of Wats, and at fairgrounds. Competitive Takraw pits teams of players versus each other across a volleyball-type net. There are three players to a team, one to serve, one to gather the ball, and one to deliver the ball at high speed across the net; the killer (like the 'spiker' in volleyball.) Modern contests play to 21 points. In village games there is often no referee and no score is kept, the winning player is simply the one who puts on the best show and gets the loudest applause from the crowd. The intricacy and speed with which it is played are astonishing and if you think your reflexes are better than average, consider these methods of sending the ball aloft; the sole kick (using the arch or sole of the foot), the instep kick, knee kick, shin kick, shoulder kick, or head kick. Want to try the cross-legged jump kick? That consists of crossing your left leg over your right and leaping up to kick the ball with the instep of the left foot. Another version is the cross-legged knee kick. In this one the player crosses his left leg over his right above the right knee, and then leaps, into the air kicking the ball with his right knee. There are several different forms of Takraw played throughout Asia but in Thailand "Takraw Lawd Huang" (Hoop Takraw) is the most popular. In this impressive version, players make a hoop of their arms behind their backs and kick the ball with their heels through the hoop in such a way that it also passes through a hoop suspended in the air over the centre. A team usually consists of seven players (there can be no less than six) who stand at the perimeter of a circle and players cooperate with each other to earn a high score. Players can use elbows, shoulders and even their backsides!. The more complicated and impressive the feats, the better the score or the better the spectators reaction. A new variation of Hoop Takraw was approved during the International Sepak Takraw Federation (ISTAF) Biennial Congress held in November 1996. Known as 'Circle Takraw' or 'Circle Event', the game is played with 5 players who stand in a circle and receive different levels of points for each passing kick. The more difficult the passing kick, the more points are awarded to the team. The circle event was included as a medal event in the 1998 Bangkok Asian Games Another version, known as "Net Takraw", is akin to badminton, in that it requires a net and a court. Lots are drawn beforehand to determine placement of the players and the first serve. Near the net, the ball is then tossed to a teammate in the middle of the court, who kicks it into the opposite camp. The game then proceeds at an incredible pace as the ball is returned instantaneously sometimes to great heights. "Net Takraw" is now played in the SEA Games and other international competitions. Apart from "Net and Hoop Takraw", other variations popular in Thailand include "Tossing-In Takraw", which has far less rules to abide by, the point is simply to see how many times the ball can be hit aloft by the player. Another version of the sport involves the use of bamboo scoops to both toss and catch a ball in a simple game of "catch." In Chiangmai, Takraw is played in the evenings at Municipal Stadium (Sanam Gila Tessaban) and in the Chiang Mai University near the physical education department.