The Korean War, by Peter Lowe. 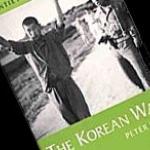 It was with a complete lack of surprise that I recently learned of yet another anti-American demonstration in the Republic of Korea, or ROK.  Desecrating the Stars and Stripes in various festive ways, the mostly young demonstrators were howling for the removal of the tens of thousands of American soldiers still stationed near the DMZ, their ire directed toward the soldiers' occasional maltreatment of the very Koreans they are supposed to defend.  Down with America, I could hear them crying.  Down, down, down.

No more astonishing was the news that North Korea, a.k.a. the DPRK, was provoking the United States in all manner of diabolical ways - secreting arms to the Middle East, tinkering with nuclear weapons, firing up its fuel rods.  It was also revealed that Kim Jong-Il, the country's reclusive and unkempt Dear Leader is something of an epicurean in matters culinary - as, I suppose, befits the Napoleon running Animal Farm.

In August 1945, two American colonels decided that Korea would be divided at the 38th parallel, a partition never intended to be permanent.  Germany had been divided to weaken it, but there was no reason to weaken Korea, which had been the victim of some of Imperial Japan's worst excesses - annexation of its territory, forced labor and prostitution - about which the Koreans are still sore.

Not surprisingly, the leftist Kim Il-Sung took the reins of the DPRK, while a rightist, Syngman Rhee, headed up the republic.  The states solidified.  At long last, the ailing and increasingly erratic Joseph Stalin gave Kim the green light to invade the south, which he did in 1950.  Under the charter of the unseasoned United Nations, the invasion constituted an actionable violation of the ROK's sovereignty, such as it was; so the UN, dominated by its inventor the United States, was summoned to act.  UN forces drove the DPRK army north to the 38th parallel and then, fatefully, drove it even further north.  China ho!

China had recently completed a long war of attrition against enemies external and internal, so it would be damned if would permit Western armies on its doorstep.  As an additional affront, the UN had refused to recognize Communist China, the honor going instead to the routed Kuomintang, licking its wounds in Taiwan.  Wanting to prove once and for all that China was no longer a silken doormat or a feeble opium fiend, Mao ordered the exhausted and sometimes barefoot soldiers of the People's Liberation Army to the Yalu.  With the help of Soviet weaponry and Soviet pilots disguised as Chinese, the Communists succeeded in countering the UN host.

General Douglas MacArthur, commander of the UN forces, had grossly underestimated China's resolve and its capability.  Yet the arrogant and rebellious general would complain that he had been forced to fight with one hand tied behind his back.  He talked of "appeasement", as if the United States bore any relation to frail England at the time of Munich.  MacArthur's analysis is eerily prescient of what was to come in Vietnam.  Writes Peter Lowe in his concise yet somewhat plodding history The Korean War:

"MacArthur blamed politicians for the mess in Korea.  Aims had not been defined adequately; the debate over crossing the 38th parallel resulted from the ineptitude of politicians.  He stated the he had been handicapped by political leaders reluctant to face realities:  China could be defeated quite easily if the politicians would 'take the wraps off'.  A comprehensive blockade of China plus the destruction of the Chinese railway system would undermine the Chinese war effort seriously."

Despite MacArthur's bound hands, the DPRK was unable to prevail, and stalemate ensued.  An armistice was signed in 1953, with a small gain in territory for the ROK, and a loss of upwards of three million people between the two sides.

MacArthur would be the first in a long line of Americans to overestimate the effectiveness of air power in Asia.  At the time, the DPRK was the more industrialized of the two states, but it was hardly as industrialized as Germany and Japan, against which air power had been devastatingly effective.  But despite the lessons of Korea, the same massive bombing would prove useless against the peasant armies of Vietnam.  I believe it was North Vietnam's General Giap who shouted that the most important factor in war is "Human beings!"  China had plenty of them to spare, and they fought with a tenacity that genuinely alarmed the rather lackadaisical Americans, many of whom had been spoiled by the easy living in occupied Japan.

With the progress of UN forces north of the 38th parallel, the Chinese gained another advantage:  what Sun-Tzu's The Art of War calls the "moral cause".  And Sun-Tzu would have approved of their ancient scare tactics:  they would blow horns and beat percussion instruments to create the illusion that their threat was omnipresent but invisible:  an early example of asymmetrical and psychological warfare.  Meanwhile, in a different millennium, some Americans - including MacArthur - favored the use of a few well-placed atomic bombs in Korea and in Chinese cities.  Fortunately they refrained.  But that China and the DPRK should subsequently have been eager to get their own nuclear weapons should come as no surprise:  between 1957 and 1991, in violation of the terms of the armistice, the United States kept nuclear weapons in the ROK.  The arms race races on, and we fatuously wonder why.

Upon the reunification of Germany the world turned expectantly to Korea for some similarly heartwarming fraternal embrace.  But the two situations are different.  The two Germanies never fought each other, and the DPRK is far more isolated than was the GDR.  Lowe sees the eventual reunification of Korea occurring gradually, but he does not discount the possibility that, having nothing to lose, the DPRK might invade the ROK once more "with all guns blazing".  This, he says, "would end in the defeat and liquidation" of the DPRK.  End, perhaps.  But what of the middle?

Meanwhile, the ROK gets rich.  The country boasts one of the highest rates of Internet use in the world, and its economy is fast approaching parity with that of its stagnating former enemy Japan.  The ROK is paraded as a singular example of democracy and capitalism saving the day.  The image is tempting - but wrong.

Much like Soviet Union, the Communist DPRK was an economic marvel in its early years.  "Industrial growth," writes Lowe, "probably averaged 25 percent annually between 1954 and 1964 and around 14 percent between 1965 and 1978."  The growth owed itself perhaps as much to Korean diligence and the euphoria of independence as to any policy.  But the growth would taper and disappear, especially with the disappearance of the ever-helpful Soviet Union.

The economic "miracle" in the ROK, meanwhile, was partly a mirage generated by American aid.  Lowe cites figures stating that American aid totaled some $12 billion over 20 years; an alternate figure sees $600 going annually to every single South Korean for thirty years.  Further, "American military aid in the 1950s was appreciably higher than for Europe" - by which he means, lest there be any misunderstanding, the whole of Europe.  And Korean capitalism has been based less on spunky free enterprise and more on massive, hierarchical conglomerates, the family-run chaebol.

Like many of the Asian "tigers", the Republic of Korea's commitment to democracy has belied its name.  Its most astonishing economic strides occurred not under a prime minister but under a military strongman:  General Park Chung Hee.  Leading a coup in 1961, Park would retain power for almost two decades.  "The foundations for the economic success in the 1980s and 1990s," writes Lowe, "were laid by Park's regime."

Whatever the reasons, the two Koreas could scarcely be more different today.  Reunification seems a far-off prospect, one painful to contemplate, and nearly as likely as a renewal of hostilities.  One has reason to be impatient, as the DPRK fires missiles over Japan and ships Scuds to Arabs while the United States sends the DPRK indispensable food.  But such is the consequence of a policy of containment.  Apply enough pressure to a thing, and the thing, depending on its properties, will collapse, sag, contract - or explode.