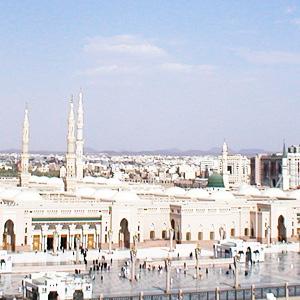 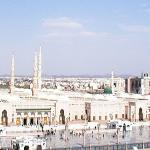 Madina Munawarra is the second holiest city of Islam after Makkah Sharif. It is in midst of a desert that is hot but not very humid. In fact, most of the Saudi Arab is desert.

The only reason for all Muslims to visit Madina Munawarra is that there is a Tomb of Hazrat Muhammad (Sala lahu Alihi Wasalam) - the last Prophet.

You will have to be a Muslim to visit this exceedingly peaceful city. Otherwise, you cannot go there.

Generally, Umra visa is for 30 days; Haj visa is usually for 40 days. Both are generally non-extendable.

For people coming from UAE and other neighbour states, there is no visa for Umra. Although, Haj registration must be completed.

There is a small airport in Madina Munawarra where many airlines fly in.

If you happen to be in Middle East, then take a 4-wheeler, and you will remember that journey forever.

What not to take:

1) Drugs - there is a death penalty for taking drugs.

2) Mobile phone having a camera is banned in all of Saudi Arab.

3) Shorts or mini skirts are out of bounds. So, don't bother yourself with these.

As mentioned before, the only Real reason for Muslims to travel to Madina Munawarra is the Tomb of Hazrat Muhammad (Sala lahu Alihi Wasalam) - the last Prophet of God.

Makam-e-Badar is some 200 Km off Madina Munawarra, and is off the main highway. It is the site of the first battle of Islam. Which means you will need to hire a van that can take you there.

Jabl-e-Uhud is a mountain which Hazrat Muhammad (Sala lahu Alihi Wasalam) loved so much so that he asked his followers to eat what ever fruit/leaf you can find on it. It forms the old boundary of the city.

There are other sites in and around Madina Munawarra. Ask your driver to take you to all Ziarats. Moreover, tell him that he has been hired for half day, and not just two hours.

Price depends on the season you go. Haj and Ramazan are the most expensive. Only hire Pakistani or Indian drivers, as Saudis are impatient and will not allow you much time to wander around. In addition, they charge more as well.

All year round, Madina Munawarra gives a festive look. However, in the month of Ramazan and Haj seasons, it looks amazing. The shops are open round the clock, and most of the things are cheap. Due to Government regulations, the price of edible items remains same all year around. There is a heavy penalty for those who price hike their food/drink items.

Everything is of high standard. You can eat anything depending on your mood. My idea is that you must try:

1) Shawarmas (Turkish made are especially good).

In one word: Excellent. There are no trains yet. Buses operate on all major routes from Madina Munawarra. If you have a heavy wallet, you can always hire a taxi for the purpose. Most of the cars are American made and there is a left side system of roads in Saudi Arab.

From the most basic to the most luxurious, you can find every type. But be careful, in Haj and Ramazan seasons, hotels can get extremely expensive. In other months, they are quite cheap.

Saudi Arab has been secure for a very long time. Now, Riyadh is seeing some fury from various antagonist groups who are hell bent on killing everyone foreign. That sort of a problem is non-existent in Madina Munawarra.

You can judge the level of security by this: I saw a 20,000 Dirham (approx. 5,763 $) gold belt in many jewellery shops in Madina Munawarra. I asked one shopkeeper as to why he was not afraid. And he told me that no body touches them. The reason: your hand is chopped off if you are found stealing something.

Such security can put off people with weak hearts. However, there are stunners everywhere. In rush hours, your pocket can become an easy victim. Many such stories of theft are heard around every Haj and Umra. So be careful. While visiting Masjid (Mosque of Holy Prophet [Peace Be Upon Him]), you should not carry wallet full with notes.