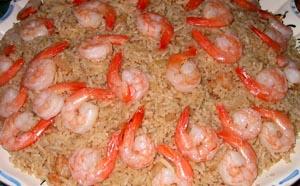 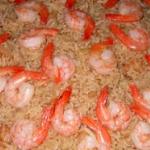 For untold centuries, the bedouins of the Arabian Peninsula have served in their desert tents, mansaf (roasted lamb with rice) to honoured guests. Along the eastern coast of that ancient land, the inhabitants have, through the ages, somewhat evolved this traditional symbol of Arab hospitality. They add much more spices to the rice and often serve fish instead of lamb along with side dishes.

As has been the custom for hundreds of years, the lamb or fish and rice are served together on a single brass or copper tray. This is then placed in the centre of the circle of seated guests, within reach of all the diners. The piping hot lamb or fish atop a mountain of rice defuses an enticing aroma - a prelude to the delights of the feast to come.

The age-old etiquette of the meal begins with the ritual washing of the hands. The diners then commence by tearing with the fingers bite-sized pieces of meat or fish and rolling them in balls of rice before throwing them into the mouth. Everyone eats in silence. It is as if the food has a hypnotizing effect. When the meal is finished, the hands are washed again and the guests are served coffee with, at times, sweets. Now, everyone takes part in lively conversation, while some smoke the traditional water-pipes.

Today, in all the Arab lands, traditional dining has moved from the desert to elegant villas and plush city restaurants. However, mansaf remains a universal favourite - as popular with foreigners as with the local population. Western visitors are usually offered their meals on tables with plates, knives, forks and china while Arab guests are served their food on a cloth spread over a carpet on the floor. Arab hospitality ensures that visitors, no matter from what part of the world, feast in comfort.

No traveller should leave the Arabian Gulf countries without partaking of a typical mansaf. The subtle flavour of the rice engulfing the lamb or fish with the aroma of herbs and spices ensures that it will be a long remembered meal. Those who are privileged to sit down to such a feast will not quickly forget their Arabian sojourn.

In the past, the Arabian Gulf countries' cuisine was dominated by the simple bedouin and pearl diver's foods. The choice of ingredients was limited. It basically consisted of seafood and rice brought by Arab dhows which traded along the East African and the Indian sub-continent's coasts. However, as centuries rolled by, these renowned ships of commerce brought back with them the spices of India and of the Indonesian archipelago. Thereafter, the people began to develop their own type of tasty foods, which became dominated with the aromatic smells of these spices.

The perfume emitted by these spices gave a soft touch to the once harsh life lived by most of the people of the Gulf area. Afnan R. Zayani in her book A Taste of the Arabian Gulf writes: "In those days, women would daily decorate their simple homes with fragrant flowers and constantly burn oud (incense). This love for aromatic smells found its way to their taste in food to the extent of using the word khaneen - literally meaning perfumed - to pay a compliment to a particularly delicious dish."

The Arab connection with spices goes back a long way. For centuries, even before the birth of Christ, Arab merchants controlled the spice trade. Acting as middlemen, they transported exotic herbs and spices to the Mediterranean region and beyond. This continued until the Portuguese in the 16th century captured the Arab controlled ports and trade routes.

The Arab hold on not only the spice trade but all commerce was so strong that in the medieval ages Arabic was considered to be the language of traders. When Columbus attempted to reach India by sailing westward, he took an Arabic-speaking interpreter with him since Europeans in that era believed that Arabic was the only trading language in the world.

In addition to the 'spice trade', in the past few decades, the newly-discovered oil wealth in the Arabian Gulf countries has enticed millions of workers from around the world. This has been instrumental in adding new foods to the time-honored mansaf.

Today, a wide variety of side dishes are offered along with the lamb or fish. The Gulf's link to the Indian sub-continent, going back for thousands of years, has imparted the taste of India and Pakistan to many of these foods. This, added to the Iranian and the influences of the neighbouring Arab lands, has created in the kitchen of the Arabian Gulf countries a world of gourmet delights.

The following dishes are some samples of these foods, which have taken on many of the spices from the Indian sub-continent. I have prepared them to my taste, either adding or changing spices.