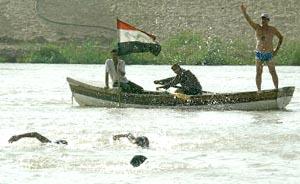 Iraqi coach of the Olympic swimming team, Said Jaafar (R), gives instruction to his team members from a row boat as they practice in the Tigris river in Baghdad 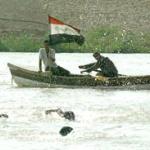 After decades of dictatorship, war and suffering, Baghdadis dream that they will once again be allowed to mess about on their great river, the life-giving Tigris. Its course loops lethargically through the city but the grand architectural follies of the "ancien regime" of Saddam Hussein dominate the riverbanks.

"Bagdad owes its existence to the Tigris, and Saddam deprived people here of their river," says Jalal Mashata, editor in chief of the An-Nahda newspaper. The fallen dictator "simply banned the population from using the river."

For ordinary people, who once lived by and even on the river, it was a communications highway, a source of food and a playground. Under the iron rule of the Baath party they had little or no access.

From the time Saddam took power, public access to the banks shrank year by year. People say the regime commandeered river locations and forced people to sell their land for nominal amounts. Today just 15 kilometres (nine miles) are open areas. Apart from the enormous presidential complex which blocks off kilometres of the river, numerous other government buildings or grand residences reserved for the Baath elite clutter the course, keeping out Baghdadis. Among the grand buildings are the headquarters of the feared Mukhabarat security services, the defence ministry, health ministry, the Saddam faculty of medicine and a bloc of 300 appartments for the presidential guard and party cronies.

The capital's tree-lined Abu Nawas Avenue, once celebrated for the fish restaurants that overlooked the Tigris, fell into decay as security measures were imposed to protect the neighbouring presidential palaces now occupied by American forces. "It's not too late to reclaim most of the banks," said one urban planner who asked not to be named. He suggested turning the palaces into tourist sites and knocking down the over-bloated VIP residences that blot the landscape to allow open embankments or corniches to be built.

"This place used to be full of life years ago," recalled an old man who lived by the river. He joined friends in tearing down the barbed wire which prevented access to the river near Abu Nawas, once one of the finest throughfares in a famed Arab capital, now disfigured by ramshackle empty shops and restaurants. Forests of reeds and wild plants invade the banks in places where poets and lovers used to wander.

Hassan, a Baghdadi, who would not reveal his full name, voiced bitterness at the security clampdown by US soldiers who today occupy long swathes of the banks. "The Americans have replaced Saddam but the security problems have only got worse despite the curfew," he said.

In post-Saddam Iraq, the Tigris, which divides the Shiite Kazimiyah district from the Sunni Azamieh area, can offer a meeting place for all the people of Baghdad.