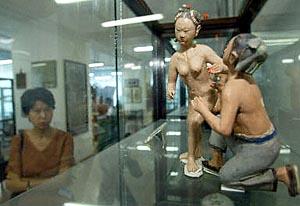 A woman visitor looks at a pornographic clay of early 19th century at the Museum of Ancient Chinese Sex Culture in Shanghai. 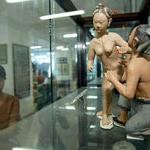 Shanghai would seem the perfect home for a sex museum given a colonial history that at its peak teemed with enough dance halls and houses of ill-repute to earn it the title "Whore of the Orient." Yet four years after opening, Liu Dalin's attempts to court Shanghai residents to the Museum of Ancient Chinese Sex Culture has proven as elusive to win as the coquettes of Chinese opera.

"At the beginning, I expected that the museum would have been very popular, but it did not develop as we wished," says the retired sociology professor and founder of the country's first sex museum.

First government officials would not allow him the use of the word sex on his billboard, making the museum all but impossible for tourists to find on crowded Nanjing Road. The authorities claimed they were upholding national regulations forbidding the advertisement of sex artifacts. "We thought of suing them but we didn't because we thought even if we win the case they might find other ways of taking revenge," he says.

Shanghai officials then refused to grant the museum "scenic location" status that would have allowed travel agencies to list it in brochures, very likely drawing more tourists. Finally, a state-owned tourism company tried to lend its support but local officials also scuttled that plan.

As the museum has failed to woo visitors -- only 20 to 30 per day, 50 on the weekends, and two-thirds of them foreigners -- Liu has been unable to recoup his more than 100,000 dollar investment by selling 30 yuan (3.60 dollars) entrances. In August he decided to take his labour of love into the welcoming arms of officials in Tongli, a small town in Jiangsu province, one hour's drive from the eastern city.

"Of course, there is some sorrow for leaving, but what I feel most is pleasantness and excitement," Liu says about his future partner.

As a pioneer of sex research in China Liu, who has written more than 60 books on the subject, aimed to educate. "When I set up the museum, I hoped it could help me to publicise, to research and to rescue Chinese sexual culture -- to awaken people from a state of sexual ignorance," Liu says. His lofty goal along with Shanghai's increasing sexual appetite seemed a sure bet.

Since the start of China's market reforms some 20 years ago, brothels masquerading as bars, hair salons and saunas have jostled for customers alongside Karaoke lounges and techno-pumping clubs that are the common haunts of 20-somethings looking to hook up.

Ironically, it was communism that provided much of the impetus for China's still nascent sexual revolution, says James Farrer of Sophia University in Tokyo and author of the book "Opening Up: Youth Sex Culture and Market Reform in Shanghai." While Farrer says market economics and foreign influence has played a major role in relaxing China's strictly codified sexual morays, gender equality invoked by the party helped pave the way to greater sexual freedom, especially for women.

Liu agrees that sexual attitudes have changed over the last several years, but says people still have much to learn. "Chinese attitudes toward sex are becoming more and more open. But it's like half an opening -- conservative minds have not been completely liberalised, while certain new and open things are leading sexual culture in an unhealthy direction," he says.

"How to lead people towards a natural, scientific and healthy attitude toward sex becomes an important task." Slogan-stilted as Liu's language may sound it belies a more fundamental truth about sex education in China. "Sex education in middle school is not valuable at all. Both the teachers and students are trying to avoid it," says Janet Yang, a 22-year-old university student.

"I was so conservative when I was in high school, I almost knew nothing about sex then," says Kitty Sha, a 22-year-old university student, who admits there is plenty of sex going on in Chinese universities. "But sex education is inadequate due to old-fashioned thinking," Sha adds.

Websites, books and movies are their main sources of information about sex, a luxury that only a few years ago they too would not have had, let alone a museum such as Liu's.

Of his relocation early next year to Tongli, Liu says he has great ambition. "To make good use of resources in Tongli to build the world's number one sexual culture museum."

Officials in Tongli have promised funding, and the space, Liu says, is ideal -- more than 6,000 square metres on the site of a Qing Dynasty women's school.

The Museum was struggling financially, so when officials from Tongli, a tourism spot that attracts 1.5 to 2 million visitors every year, came to Shanghai last June to talk about moving, Professor Liu, founder of the museum, was very interested.

The two sides agreed to locate the museum in Tongli for 10 years. The town of Tongli invested 3 million yuan (US$363,000) in the new museum, with Liu and the town sharing equally in profits from ticket sales. The new 5,000 square metres museum is in a building that once was a girl's school which opened in 1906. It is next to Tuisi Garden, one of the cultural relic sites of neighbouring Jiangsu Province. In addition to planting trees and flowers in the large garden, Liu already has plans to construct a park of stone sculptures. The theme - sex, of course.