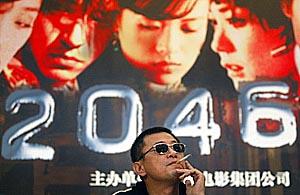 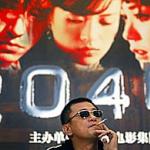 It was a film some cynics suggested would never be finished. But after four years in the making the hotly-anticipated '2046' by acclaimed Hong Kong director Wong Kar-wai finally goes on general release in China Tuesday before rolling out across the globe.

The stylised sci-fi flick, which Wong has spent months re-editing since it surprisingly failed to win an award at the Cannes Film Festival in May, 2004, is tipped to cement the director's international cult status while making him a box office success overseas.

During a series of publicity events for '2046' across China last week, Wong admitted the tortuous film-making process was "like being in jail" for his star-studded cast -- which included Tony Leung Chiu-wai, Gong Li, Zhang Ziyi, Faye Wong and Maggie Cheung -- but insisted it had been unavoidable.

Now audiences will get a chance to judge if it was worth the wait.

"I think the fuss about all the delays will help the film," says Liz Shackleton, Hong Kong correspondent of Hollywood bible 'Screen Daily'. "The hype will have whetted people's appetites even more.

"It left Cannes empty-handed but it was a weird decision. Those who liked Wong's previous films won't be disappointed. It's really a continuation of 'In The Mood For Love'," Shackleton says.

'In The Mood For Love' -- a doomed love story set sumptuously in 1960s Hong Kong -- was Wong's true breakthrough movie when it was released in 2000.

He had already established himself in 1997 by being named best director at Cannes for 'Happy Together', his tale of a strained relationship between two Chinese gay lovers living in Buenos Aires.

But 'In The Mood For Love' took 2.7 million dollars at the US box office and scooped awards worldwide. It was nominated for a Golden Palm at Cannes, where it earned Leung a best actor award.

The new movie is a loose follow-on from 'In The Mood For Love', with Leung's reprised character becoming a Bukowski-esque womaniser, still living in the 1960s. He is writing a sci-fi script about a train which leaves for 2046 where people could recapture their lost memories and the film flits between the past and the future.

Explaining the title of the film, the director said Saturday it was based on the promise by China not to make any changes to Hong Kong for 50 years after it was handed over to the mainland from Britain in 1997.

"I asked myself what, in the world, does not change in 50 years?" he said. "When we are in love, we care the most about our mutual promises, if we do change, if something eternal exists. It's because of that I have selected this number to tell a story about love," Wong said.

The film has its Hong Kong premiere Tuesday, coinciding with its general release at cinemas throughout China.

It is only Wong's third movie to be granted a mainland release and the director says it would have been released sooner except for the outbreak of SARS, or Severe Acute Respiratory Syndrome, in China last year.

"I heard Wong was going to shoot more scenes with Gong Li and Faye Wong, so I shaved my moustache immediately," Leung, who starred in 'In the Mood For Love' and 'Happy Together', told Britain's Guardian newspaper. "You just can't go on shooting like that; you have to stop."

Leung told reporters in Beijing that Wong "suffered during production, because he did not have a complete scenario and no specific orientation". But he added: "I, however, find his way to create exciting and very original."

Wong, whose other hits include 'Chungking Express' and 'Days of Being Wild', insisted hat he could "produce very quickly" if necessary.

The delays meant he lost Maggie Cheung for most of the movie -- she was replaced by Faye Wong. Highly-acclaimed cinematographer Christopher Doyle -- a regular member of his creative crew who is credited with giving Wong's films their distinct atmospheric quality -- also moved on.

Earlier this year Wong signed a three film deal with Fox Searchlight Pictures to develop a minimum of three English-language movies, although not necessarily as writer or director.

Other upcoming plans include a film about Bruce Lee's Kung Fu master, again starring Leung. But his next scheduled project sees him teaming up with a leading Hollywood star for the first time. Oscar-winning actress Nicole Kidman will play a role in 'The Lady From Shanghai', which will start filming in February. Or maybe later.