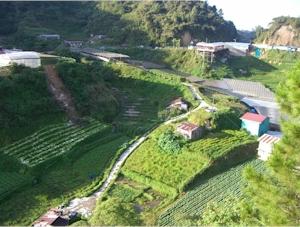 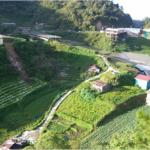 It used to be a very long and tiring drive to Cameron Highlands from Singapore via the Singapore-Johore Causeway. However, there is now a shorter and easier route. Where motorists taking the North-South Malaysian Highway used to turn off at Tapah to head up the long and winding road (which sometimes makes a traveller feels sick) to the hilltop of Cameron Highlands, one can now drive past Tapah. This time, exit at the Simpang Pulai highway toll checkpoint, then turn right to Cameron Highlands. Road signs are clearly marked so there is no fear of getting lost on the new road. It takes about one and a half hours to reach Simpang Pulai from Tapah by car. This is definitely a better proposition than the Tapah route because of the long three hours drive up the mountains.

Going up Cameron Highlands from Simpang Pulai also means one reaches Brinchang first (about a 20 minute drive). Brinchang is the highest accessible point by road in Cameron Highlands. If one travels from Tapah, he hits the town of Ringlet (the lowest point of the highlands) first. Mid-way between Ringlet and Brinchang is the town of Tanah Rata where the bulk of activities are, such as a golf course, eateries, restaurants, rest houses and hotels.

My family and I went via Simpang Pulai in December 2005 during the school holidays, having been alerted to this new route which I believed opened not so long ago. On our way up from Simpang Pulai, I saw few Singapore cars and thought it must be because Singaporean motorists have not got wind of this new route yet. The roads that lead to the highlands from Simpang Pulai are much easier to negotiate. They are wider and a driver would find this makes for safer driving. On our last trip we did not encounter landslides like we did when we travelled via the Tapah route some four years ago. Landslides do occur in the highlands and this gets worse during the wet and rainy season at year end. The Simpang Pulai route also provides a scenic view of the mountains when travelling downhill.

What I like about this route is that it gets me into Brinchang town straightaway. There was no need to negotiate through the other two lower level towns - Ringlet and Tanah Rata. I must quickly add that it is not that these two towns are inferior to Brinchang, but for a traveller who has been sitting in the car for probably the last six hours, I cannot wait to arrive at my destination.

My family and I left Singapore at 7:10 am on a Monday and we reached the Equatorial Hotel located at Brinchang at 2:45 pm. Really, this is not so bad a ride compared to a Singaporean girlfriend who went to the same place some weeks before us but which took her about ten hours to arrive via the Tapah route (with short stops for toilet breaks and a quick bite).

The Equatorial Hotel at Brinchang where we stayed whenever we visited, is 1,628 m (5,300 ft) above sea level. The disappointment that greeted me during my recent trip there was its very run-down condition. Just like years ago, some apartment units were without water. I wondered why they never tried to solve this issue. The toilets of my family apartment smelled bad. I suspect the smell came from the shower curtains. The big balcony in our apartment which overlooked beautiful vegetable farms did not come with garden chairs. If there were such chairs, perhaps we could sit outside to enjoy the scenery. As it turned out, the balcony was rarely used. From what I observed, few people used their apartment's balcony at all, which was a shame because the surroundings could provide a perfect background for a quiet siesta, or simply for one to feast his eyes meditatively on the scenic vegetable farms.

On the first two days of our visit, the hotel's coffee house where we had our daily breakfast was jam packed with people. There were not enough attendants on hand. Tables were not cleared fast enough for new arrivals. Worse, at one breakfast I was given a metal spoon that smelled so bad that I was eating my nasi lemak (coconut rice) with my fork.

The resort as a whole showed its age and a counter receptionist expressed surprise when I asked if they intended to upgrade the hotel. Disappointing it was to me because I liked staying at the highest point at the highlands. Now perhaps I have to look elsewhere lower down the hill, for example, staying at the hotels or apartments that look so much better at Tanah Rata. Staying at Tanah Rata would mean that one gets the golf course view. There the green fees and a caddy come cheap. Then again, do not expect a first class course nor a caddy who could help with the finer points of golf. Boys as young as seven or eight years old gather around us to ask if they could caddy our clubs as soon as we parked our car at the golf course.

Tanah Rata was, and still is, the place for food. Less than ten minutes drive down from Brinchang, Tanah Rata was where I got my daily dinner fix of steamboat. Fresh vegetables and meat thrown into this pot of hot clear soup made with chicken stock - now, that's yummy to keep the body warm from the cold weather. Talking about the weather, it was disappointing too. Where years ago, the weather was really cold and you could see the hot air emitting from the mouth, these days the weather there is about 18 deg C to 23 deg C. My escapade from hot and humid Singapore bore not much result. I could easily get 23 deg C in normal aircon situations in Singapore. For most part of the day at Cameron, with temperatures hovering at 23 deg C, I could go without my sweater. Incidentally, the airconditioning at my office is colder than the air at Cameron Highlands.

A food centre at the eating belt of Tanah Rata looked like it had opened only recently. My family and I tasted the food from two stalls one afternoon and found them to be good. One was Cameron Corner Tom Yam Seafood where we had rice and noodles and the other was Highlands Satay Brinchang where we had satay (sticks of skewered meat).

Tanah Rata now also boasts of a Secret Recipe cafe. Now, that feels like home where we also have such a cakery. My husband's verdict of its lamb stew was good. But really, nothing beats taking steamboat when one is in Cameron Highlands. What with the availability of fresh local vegetables, I could just have many bowls of vegetables and soup. This way I could ensure I keep my weight down too. Of course, to fill the stomach better, one could always add noodles or vermicelli to the tasty "fondue".

All said and done, my body rested in a run-down resort, my hunger satisfied with fresh vegetables and hot soup, my soul none the more refreshed from slow walks to the markets, farms and nurseries because of the heat for most part of the day, Cameron Highlands has definitely seen better days. It is a shame that with much logging and getting the place commercialized, its natural habitat lost its soul of classic charm, peace, quiet, tranquility and cool weather.

However, there was still one place that was heaven to me. During my last visit in December, I made it a point to revisit Cluny Lodge, a bungalow house that belonged to the Singapore Government. Cluny Lodge held fond memories for me. In my early twenties, I stayed in that bungalow with my cousin and some friends and it was heavenly. I remembered the wonderful breakfast we had in the room with glass windows and I remembered the fog that gathered outside the window as we ate. Brrr... it was very cold then. Thank goodness, Cluny Lodge is still very much well maintained. It was the way I remembered it - its stone wall facade and the wide open spaces with pretty flowers outside the bungalow. Very private and quiet. A word of caution though for people going there without their own car - Cluny Lodge is not easily accessible to the main activities area. You have to be prepared to do quite a bit of walking. Also note that civil servants (that is, those working in Singapore Government offices) have first priority in reserving this bungalow which has some six or seven rooms, each of which could accommodate up to four people.

Something else worth looking forward to is the revamped Merlin Resort. This resort used to be the resort of Cameron Highlands but it has deteriorated to the point that it was being torn down for redevelopment when I was there in December. Hopefully, the reconstructed resort will be a reason travel to Cameron Highlands. After all, this resort has the vantage view of the golf course. Then again, perhaps the golf course ought to be improved as well?