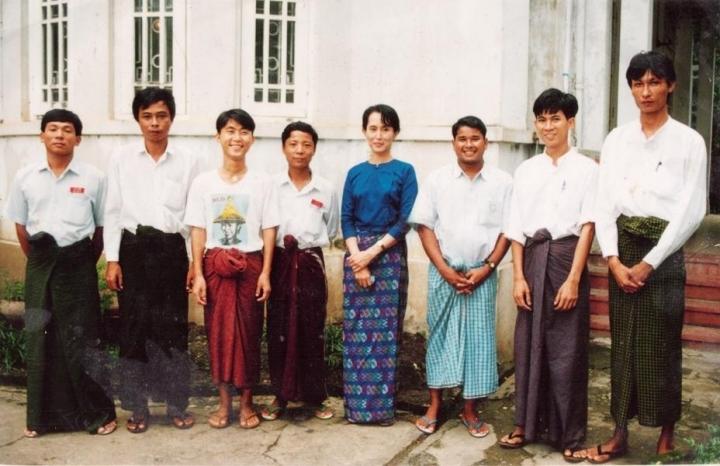 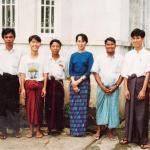 Aung San Suu Kyi: The Voice Of Hope is a book by Alan Clements that documents a series of conversations between Nobel Peace Prize winner Aung San Suu Kyi and the American author. The National League for Democracy (NLD) leader was asked by Clements how Burma could achieve a democratic revolution through non-violence and overcome a brutal military dictatorship which has an army of 400,000 people.

Her answer was simple: "Courage."

This singular trait, in the eyes of "The Lady", as Aung San Suu Kyi is affectionately known, is what her supporters and the civilians possess and demonstrate in abundance. Any individual that campaigns for freedom and democracy in Burma will be arrested, interrogated, tortured and locked away.

One man who can account for such horrors is Iqbal, a 39-year-old man from Rangoon now living in Melbourne, Australia. He has three sisters living in refugee camps in Thailand, and was a survivor himself of imprisonment and torture before fleeing Burma and reaching Thailand's largest refugee camp, Mae La, on the Thai-Burma border.

Iqbal's story is living testimony of the Orwellian nightmare that is carried out daily in modern day Burma. But one characteristic particularly enables him to stand out. Iqbal is a former bodyguard of Aung San Suu Kyi.

Iqbal and I speak through the assistance of a translator and in between sips of green tea he re-traces the path that began prior to the military coup of 1988.

"When I started working for the Mining Ministry, I won two gold medals, in 1985 and 1986, for hurdles in athletics. Each government department held their own sporting competitions every year," he begins. Iqbal's salary ranged between 130-170 Burma Kyat ($USD 19-27 today) a month, higher than the regular government worker's salary. But a lack of government funding forced him to quit, as his salary was not enough to allow for a basic standard of living. Iqbal was also a keen kickboxer, occasionally training at a facility owned by a family member.

In 1988, the death of a student at Rangoon Institute of Technology, as well as civilian protests against the devaluation of the Burmese Kyat led to the 8888 Uprising (named after the day of the uprising's commencement, August 8, 1988). After weeks of protests, Burmese army soldiers opened fire on crowds around the country and massacred 3,000 people. Thousands more were arrested or fled into the jungles.

As the world saw images of the mass slaughter unfold, Iqbal turned to political activism. He provided security for Botataung township and formed the Tri Colours Flag Students and Youth Organisation. "We guarded Aung San Suu Kyi and the NLD Party between 1988 and 1990, meeting with her and (NLD) officials daily," he adds. In addition, Iqbal helped take care of administrative duties and management of the NLD.

The Tri Colours Flag Group worked with other opposition groups and, as chief organizer, Iqbal wrote letters and designed pamphlets speaking out against the military regime. "Between 40 and 50 (people) operated in and around Rangoon. We had to move quickly to avoid being detected and arrested by government officials. The Burmese junta attempted to intimidate us and regularly carried out beatings and harassed us all the time," he explains.

The constant surveillance eventually led to Iqbal being arrested in the lead-up to the 1990 election. He was detained for causing unrest and organizing student demonstrations during and after the poll, which the NLD won but the military junta refused to honour. Iqbal was apprehended by two members of the junta and arrested on November 11, 1990 after attending a demonstration. He resisted his arresters and punched a Burmese Army Major, but was beaten unconscious by between 20 and 30 government military intelligence officers who joined in the attack.

"They had been waiting inside a tea shop and moved in to attack me," he continues. "The officers knew that I was a kickboxer and that my uncle had run a club for members for the NLD, Tri Colours Flag and other opposition groups." Two of Iqbal's friends, a member of the All Burma Democratic Students Federation and another from the All Burma Youth Organization, were also apprehended.

Iqbal was interrogated and beaten by members of both Military Intelligence (MI-3) and the Navy, as he lived close to the port attached to the Rangoon River before being subjected to beatings. This began his two and a half year sentence, commencing with a month's incarceration at the notorious Insein Prison without charge.

"For four days, I was laid on my side and handcuffed behind my back. The navy officers placed a hood over my head so I could not recognise anybody," Iqbal elaborates. For a moment, I considered getting up from my chair so he could show me exactly what position he was forced into, but I decided against this.

Officers rotated every two hours and on several occasions, Iqbal was beaten by multiple navy officers. "I was deprived of food, water, sleep or medicine. My psychological and mental state was so bad as a result of the pain, I started banging my head on the table incessantly so that I split my head open and (would) receive treatment and hopefully get a reprieve from all of the torture," he says without pausing. After four days, Iqbal was given one slice of bread, a cup of water and some medicine to treat the head wound. The beatings, however, continued.

In January 1991, Iqbal was found guilty of causing unrest and sentenced to three years hard labour. He shared a prison cell with 200 people, both common criminals as well as political prisoners. Family members and friends were able to visit him once a fortnight for 15 minutes at a time, but prison authorities made them wait in for numerous hours before being given access.

Following his release in 1993, Iqbal's story became keenly sought after, and he was interviewed by an Australian journalist in Rangoon about his experiences of torture in jail. This material appeared alongside interviews with Aung San Suu Kyi and U Tin U (co-leader of the NLD) for a documentary that appeared on Australia's ABC TV network in April 1996. The Burmese Embassy in Canberra recorded a copy of this program on videotape and sent it to the military junta in Rangoon.

With a sustained media focus about the documentary's contents, Iqbal was arrested for a second time in June 1996, again after leaving Aung San Suu Kyi's residence in Hle Den Junction, near Rangoon University. He was sentenced to seven years jail. The junta also planned to sue Suu Kyi and Iqbal for subversion and for spreading misinformation about the political and social situation in Burma.

"I escaped torture after being arrested because Aung San Suu Kyi personally intervened by meeting with the junta leadership and filing a missing person's report on my behalf," Iqbal tells me. While in Tharyarwaddy prison, he met with Professor Paulo Sergio Pinheiro, the United Nation's Special Rapporteur for Human Rights Violations in Burma, and gave evidence regarding torture within Burma's prisons. This resulted in interrogation from intelligence officials by Pegu Division over comments he made about the allegations.

Upon being set free in November 2002, two years after Suu Kyi had been re-arrested by the junta and placed under house arrest, Iqbal became politically active again. He was assigned to Suu Kyi's Social Standing Committee for the NLD, and at time the same time, collected data on the state of Burma's prisons and assisted former and current political prisoners attain better access to health and education. In mid-July 2004, he was seriously advised to stop everything for his own good by intelligence officials, and at this point made the decision to leave the country.

After gaining financial assistance for food and clothing, Iqbal took a bus from Rangoon to Myawaddy, where a local guide helped him get across the river to Mae Sot, Thailand. Eventually he entered the Mae La refugee camp, where he remained for four years. The camp houses more than 40,000 refugees from Burma, mainly ethnic Karen people. The Thai army runs the camp, but it is administered by the Karen National Union (KNU).

Since arriving in Australia in 2008, Iqbal now works closely with supporters of the NLD Party living in the country, but does not have an official role. He is a representative of the Assistance Association of Political Prisoners Burma, providing support for political prisoners and their families. But he is concerned about possible repercussions against his sisters who are in refugee camps in Thailand.

Surviving torture as a political prisoner leaves Iqbal convinced that everybody has the right to stand up to their aggressors and attackers when meeting outside of their comfortable environment. This brings everyone onto a level playing field. "Following my release from prison in 1993, I spoke to the generals who ran the prison where I was incarcerated. I met them inside a tea shop," Iqbal says, then looks me in the eye. When I query him as to whether he was frightened to approach them, he shakes his head.

"I declared, ‘We do what we believe in. You did terrible things to us. If we want to get revenge, we can do it easily. But we do not want to do that. The bruises you inflicted are not there anymore, but the scars will remain with us forever.'" It is this defiance that is nurtured by survival from an environment of war and its aftermath, and Iqbal explains to me that when authority members in Burma stick together in numbers, they feel invincible. But as individuals on the street, they are frightened.

Our conversation inevitably focuses on Aung San Suu Kyi, the politician he protected for many years.

"There is one incident that will always remind me of how special she is," Iqbal relates. "It was Thingyan (Burma New Year) celebrations in 2006 at Daw Aung San Suu Kyi's residence. The military junta had blocked off the house and street to prevent everybody from leaving the (NLD) compound. Many soldiers were in front of the residence, including the divisional commander. We were all about to leave the front gate. The military commander, along with his soldiers ordered us not to attempt to leave the residence. But Aung San Suu Kyi simply walked out the gate, ignored the soldiers, and continued to walk on without looking back. I was amazed at this show of resilience."

It is this act of defiance that is written about in books and recorded in documentaries, but very few individuals have the distinct honour of witnessing it in person.

Iqbal continues, "Later that evening, I asked her, ‘Auntie (a term of respect), why didn't you look back when they were out to stop you?'"

Her response was, "When they call out your name, you don't look back. You do what you have to do. A soldier might shoot at you, but looking back will make you feel something. That feeling may cause you to lose sight of your ultimate goal."

Aung San Suu Kyi's endless courage provides Iqbal with the inspiration to spend his life working to see Burma achieve a genuine democracy that its civilians have prayed and paid the ultimate sacrifice for.

"Since I know injustice takes place in Burma every day, I know that I am safe in Australia, but I cannot forget what has happened to me. The pre-condition of having all political prisoners released before any democratic election taking place in Burma in 2010 is very important. No votes in Burma can be cast freely and fairly before then. Until that day arrives, I can never be at peace."