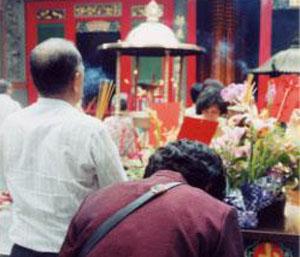 Worshipping at Lungshan Temple, Taipei. Religion is just one example of Chinese influence on Taiwanese life. 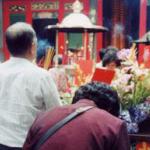 "Is your roommate Chinese or foreigner?"

At first I didn't know how to answer that question, most often posed by my ESL students. I was living in Taipei, and my roommate was Taiwanese. I considered all my students as "Taiwanese," too. Weren't they?

Yes and no, I learned.

History in a Nutshell

Taiwan's history has been linked to Mainland China for more than 600 years. Chinese (ethnic Han) began to migrate from Fujian province and ethnic Hakka from Henan province in the 1400s. Taiwan became a county of Fujian province in 1684 and was made a province of China three years later.

China ceded Taiwan to Japan as a "spoil of war" via the Treaty of Shimonoseki in 1895. Taiwanese residents unhappy with Japanese rule formed the short-lived Formosan Republic, the first republic in Asia, but Japan crushed the rebel government within a year. Japan then ruled Taiwan for the next 50 years, until the Yalta Agreement in February 1945 gave China sovereignty over Taiwan after Japan's defeat in WWII.

Mainland China had its own troubles at this time. The Nationalists (KMT) were struggling to take firm control of the government. A corrupt KMT-appointed governor was sent to rule Taiwan. His misrule resulted in the massacre of 10,000-30,000 civilians to repress anti-KMT riots.

"Taiwanese are also Chinese. There's no difference between Taiwan and China. Taiwan is a democratic state. But China isn't. So I don't think Taiwan should reunify with China." So wrote Celia, a high school-aged writing student, in her essay answering the question: Should Taiwan and China reunite?

Every evening-and Saturday afternoons-I entered the classroom, and students greeted me with tired smiles and sometimes news of their days' events. At first they were strangers, unfamiliar faces, mostly of young professionals and high school students. Some were more eager to be there than others. At first I wondered who was more nervous, my students or me.

How is it possible for Taiwanese to support Taiwanese independence while also maintaining a strong Chinese identity? I found insights both in and out of the classroom. At a bar, a friend vigorously wrote a few characters on a cocktail napkin and explained the pictograms behind 'home' (jia), 'cry' (ku) and 'pig' (zhu). Taiwan preserves true Chinese culture, argued my friend, by using the traditional characters. Students also showed pride in Taiwanese economic and democratic progress. In this, they have a strong identity, too.

An ability to remain open to all possibilities seemed to be a common trait among my Taiwanese friends and students. When we discussed Taiwanese politics and if they thought Taiwan and China should reunite, often the reply was "not yet." They saw the possibility for a democratic mainland, when the two countries could possibly be governed as one.

I as a Westerner wanted to see things in black and white, yes and no, good and bad, but my students and friends taught me sometimes "not yet" is the truest answer. Call it doubt, hope, or indecision-call it what you want-the Taiwanese identity might not be able to survive without it. I prefer to think of it as openness.

Go With an Open Mind