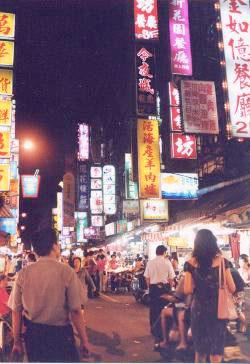 Friends and families enjoy shopping and eating at the night market. 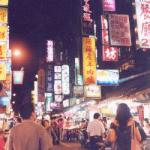 No doubt about it, people in Taipei love to shop. Night markets get buzzing when the sun sets and usually close up between eleven and midnight.

There are six major night markets in Taipei, most within walking distance of an MRT (subway) station.

A pet mongoose snoozes on a platform in one of the many restaurants. A traditional painter plies his trade and displays his artwork in a small stall. And yes, there are snakes at this night market in Taipei's oldest district.

My Taiwanese friends disagree as to whether Snake Alley should be billed as a legitimate night market or a bizarre tourist attraction. Here you'll see snakes milked of venom and blood, and you can order meals prepared with snake blood and meat, and turtle blood and meat. These "delicacies" are expensive, unlike the common snacks found at most night markets.

Many Taiwanese have a negative view of Snake Alley. The thought of eating snake meat or drinking snake blood disgusts them. Some still associate Snake Alley with prostitutes, although the area has been cleaned up from the years when prostitution was legal. Many food stalls sell regular snacks, and snake handler performances always draw crowds, but you may find your Taiwanese friends not so eager to come here.

Snake Alley is in the Wanhua District. Take the MRT to the Lungshan Temple stop.

More than a hundred years ago, the Chuanchou people came to sell produce and fish in the Shilin area after surviving a standoff with a neighboring group. This is how Shilin Night Market, the biggest and oldest night market in Taipei, is said to have begun. You might feel like part of a train wreck trying to navigate the crowds on weekends. Shilin has a carnival-like atmosphere, with games like catching a goldfish using a tissue paper net (the goldfish is the prize), and shooting plastic cans with air rifles. You can find deals on clothing, shoes and other accessories here.

A maze of stalls in the market's heart offers delicious seafood dishes, like squid stew and oyster omelets. Remain calm if a stranger hovers over you while you eat-he's just waiting to take your seat when you're done.

Shilin Night Market is in Shilin District and accessible from the MRT Shilin stop.

The real action at this night market takes place in several side streets off Shida Road. Much smaller than Shilin, this night market serves many university students, including foreigners, since it's located near National Taiwan Normal University. It's a great place to shop if you've recently moved to the area and need small, basic appliances, dishes, writing and postal supplies, and other practical things for your new apartment.

Shida Night Market is in Taan District, accessible from the MRT Kuting stop.

You're at the right place when you see the brightly lit "Zau Ho Market of Tourist" sign at the entrance of this large, old night market. Definitely check out Shandong Hsiaomo Sesame Oil Shop, which has been in business nearly 150 years. They sell all types of cooking oils. A flea market in an alley off the main market makes Jaoho unique, as most night markets sell only new stuff. Maybe you can find what you want at the flea market and contribute to recycling, too (ease your guilt for unbridled consumerism elsewhere).

Another night market frequented by students, Kungguan is near National Taiwan University. Similar to Shida in layout, Kungguan has a variety of stores and street vendors. It's in Chungcheng District, only two MRT stops away from Shida.

The night market is actually a long alley between Tunghua and Keelung Roads. Lots and lots of food stalls.

You could probably eat a new food at a new stall every night for the rest of your life. However, there are common snacks you're likely to find at all night markets.

Chou dofu. Oh, the bane of stinky tofu. People either love it or hate it. Your nose will tell you where to find this smelly stuff.

Dou hua. A light, sweet dessert that looks like tofu. Dou hua can be served with peanuts, almonds, sweet red bean, and several other toppings. It's usually served over shaved ice, but at least one vendor serves it in a cold, sweet tea-flavored soup. Average price: $25NT.

Oyster omelet. Made with green onion and a slightly spicy sauce, the one I ate at Shilin was runny, hot, and delicious.

Taiwanese sausage. Like kielbasa, only better. Eat too many of these and you're asking for a massive heart attack. Hey, at least you'd die happy. Average price: $20/NT.

"God made dirt, dirt don't hurt" seems to be the motto of many night market food vendors. I heard stories of vendors dropping cigarette ashes into food and stepping over bowls of ingredients left on the ground, but I personally never had a bad experience. Here are a few things you can do to protect a delicate digestive system:

Look for a place with a lot of people standing in line. Long line = good sign (that customers aren't being poisoned).

Ask to have something made fresh while you wait, instead of buying something the vendor may have had sitting out for a while.

Watch to see how the food is prepared.

If you're standing in line and your street vendor suddenly packs up and pushes her cart into a back alley, it's nothing personal. She just got word that the police are coming. Some vendors operate illegally, and an informal, yet effective, network of runners warns them of surprise police inspections. This is a bewildering treat for a clueless foreigner. In your ensuing footrace with all the other customers, remember to keep sight of the cart as well as trying to keep your place in line.

You shouldn't need to bargain or worry about being cheated at night markets. Prices for clothes and other goods are already very reasonable, and most vendors don't cheat foreigners. However, as with all crowded places, you need to beware of pickpockets.

Author's note: Taipei street spellings-aaarrgh! Government resists using pinyin, the transliteration developed by the Mainland, and so there are many variations of a single street name. I've seen Jaoho written as Raohe, Zauho, and Jaoher. Hwahsi is Huaxi. Just another little quirk that you'll find charming once you've lived in Taipei awhile.