The Colorful Process to Monkhood 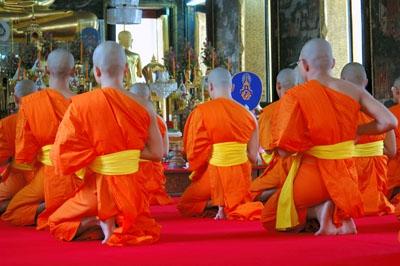 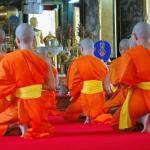 Theravada Buddhism is the main religion in Thailand with roughly 95% of the people following this belief. In Thailand, all young men are expected to go into monkhood at least once in their lives (preferably before the age of 20) in the belief that their mother will go to heaven. The coronation ceremony is attended by the whole family and close friends (and later the whole town) and is celebrated with traditional proceedings and contemporary activities.

The ordination is a two day process. On the first day, the monk-to-be will gather with his family and pay respects to their ancestors. He then washes his elder’s feet as another sign of showing respect.

It is then time for the young man to have his hair shaved. All of his friends and family attending the ceremony will take turns cutting a piece of his hair. After that, the senior monk will do the rest and shave the young monk-to-be’s hair right down to the skin. During this process, all the cut hair is placed on a lotus leaf and is not allowed to drop to the ground. The cut hair is kept at his relative’s home for three days before being floated off on a nearby river. After shaving his head, the senior monk makes his way to the eyebrows and shaves them off. Crushed herbs are then rubbed all over the boy’s body and then washed off by his friends and family, signifying cleanliness and purity. The cutting of hair is purely symbolic. Around the time of Buddha, long hair was considered to be a sign of royalty. When Buddha became enlightened, he cut off his hair as a way of renouncing all of his worldly goods.

After the hair shaving ceremony, the young man may then take an additional shower before being paraded around town in white garments. The clothes signify that he will become a monk soon. During the parade, he may visit shrines and pray for good luck. After that, the young man then enters the local temple and listens to a chanting session, where a sermon is also present. After the chants, the sermon gives advice to all the people present.

The next day, a procession around the temple can be attended by anybody, even strangers to the man. This part of the ordination can be very colorful as people will be playing music and dancing and umbrellas can be seen everywhere. Then, the soon-to-be monk stops at the temple entrance, lights incense sticks and kneels down. He then throws coins over his shoulders, symbolizing his renouncement of worldly possessions. The crowd behind him usually scrambles for the coins, as it is considered good luck.

It is almost official, but the man still has to perform chants in order to become a monk. This can be quite intimidating for many because of the memorizing involved. Before the whole ordination procedure, the young man is given a chant book to study and memorize. The chants themselves are also not in Thai, but in Pali (a literary and liturgical language of the early Buddhist scriptures originating from India) which makes it even more difficult to remember. The white garments on the young man are then exchanged for the orange clad ones. Then, he would repeat after a senior monk vowing to honor the precepts (the fundamental code of ethics for monks), which is again done in Pali. Finally, the young man is declared a monk.

The young monk’s friends and family may throw a party nearby the temple celebrating the ordination process. Singing, dancing and eating can be done right next to the temple. However, the young man must resist temptation and not join in the fun because he is a monk now.

As you have read, a man being ordained into monkhood can be a big deal. It is a cause for celebration for family and friends. Some will enter monkhood only briefly (as little as two weeks) while others may continue being a monk for a longer period of time. Some institutions in Thailand even allow three month leave for employees so he can become a monk during Buddhist Lent.

Exotissimo has two day trips where you can experience some aspects of monk life (A Morning with the Monks in Chiang Mai tour or Chanting at Wat Po & Grand Palace tour.) You will hear for yourself why some men cringe at the fact that they have to memorize the chants. It is long and complicated!