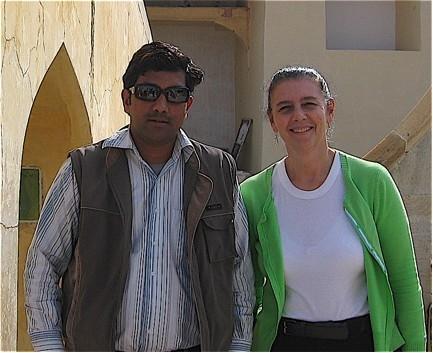 Ravi introduced us to the exciting city of Jaipur. 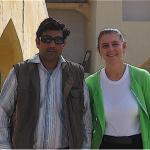 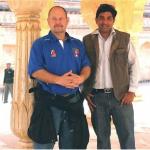 “There must always be compromise, compromise, compromise”.  Ravi was the twenty-nine year old tour guide who introduced us to the fascinating city of Jaipur, India.  Ravi had been married for five years and had a three-year-old son. Like most young people in India, Ravi agreed to let his parents chose a bride for him. Ravi told us before his wedding day he had never seen his wife in person, although they’d talked on the phone and exchanged e-mails. We visited an astrological museum with Ravi and he explained the important role astrology plays in people’s lives in India. His parents carefully consulted astrologers before picking the day for his wedding to insure his marriage would be fruitful and long lasting. I asked him if most arranged marriages were successful. He smiled and said, “Yes, but there must always be compromise, compromise, compromise”. I laughed and told him when you marry for love compromise is also the key to a happy marriage.

Ravi’s wife is a teacher and that was Ravi’s former profession as well. He taught high school history but was only earning $200 a month. Since he spoke English fluently he decided to try being a tour guide. This has vastly improved his annual income.

Ravi’s home is on the same yard as his parents’ house. His brother, who is a lieutenant colonel in the Indian army and an avid polo player, also has a house on the same yard and lives there with his wife and three children. Ravi says when his parents die the land will be split equally between the two brothers. Ravi hopes someday his son will build a house on the family land as well. “Good children live with their parents in their old age and look after them”, he says.

Ravi was wearing Western clothes. He told us while this is acceptable for men; women are more respected if they dress traditionally.  His wife wears jeans and T-shirts at home but always puts on a sari when leaving the house. Ravi had red dye in his black hair, as do many men in India. I asked Ravi about it and he laughed and said the color is to cover streaks of gray. Red henna is the fashionable hair color choice in India.

Ravi told us his middle and last names identify his caste and sub caste. Ravi’s family belongs to the military caste. I wanted to know more about his sub caste but he said the ancient caste system, which is still important in India, is extremely complicated and impossible to explain to Westerners.

Ravi was gregarious and knowledgeable.  He encouraged us to ask as many questions as we liked about India. I’d been dying to find out more about all the cows roaming the streets of every city. Ravi explained cows are sacred to Hindus because their deity, Lord Krishna was a cow herder. He said every cow actually belongs to a family and goes back home for the night. I also wondered why so many people urinate and defecate in the street. Ravi said its because Indian cities simply have no public washrooms.

Ravi was very curious about the notes I was making during our tour. I explained I was a writer who often posted travel pieces on a website called Things Asian. Ravi asked me if I was going to write about him and I assured him I would. He’s already e-mailed me and told me he’s checking the website to see if he’s been featured yet. So here you go Ravi! This article is just for you!