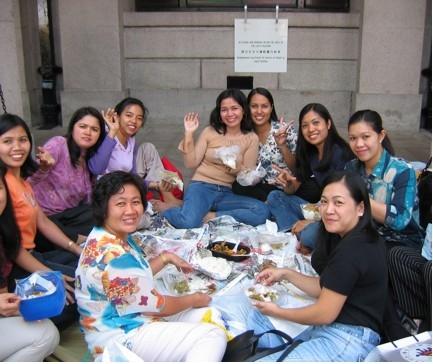 Filipino maids in outside the Hong Kong Law Courts Building. 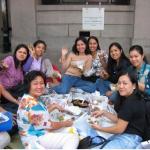 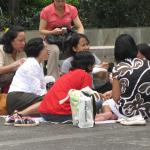 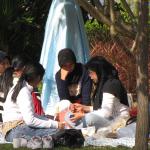 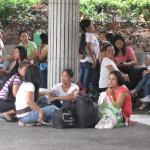 Every Sunday thousands of female workers from Indonesia and the Philippines gather in Hong Kong’s Statue Square. There are groups enjoying each other’s company everywhere you look. Some are eating while others visit, play cards, style one another’s hair and trade romance novels.

There are an estimated 200,000 female domestic workers from other countries living in Hong Kong. Most are employed as maids for the city’s wealthy families. These ‘helpers’ ( the common term for domestic laborers in Hong Kong) are expected to work twenty four hours a day, six days a week, but government regulations dictate they must be given twelve consecutive hours of free time each Sunday. Since the women cannot afford to go to movies or eat in restaurants on their day off, they gather in Hong Kong’s train stations and parks or outside public buildings.

One Sunday morning, I went down to the heart of Hong Kong’s business district to spend some time talking with the women in a central plaza there. The ten women I spoke with all come from the same rural area in the Philippines. They work in homes in different sections of Hong Kong but on Sundays they meet at St. Joseph’s Cathedral located in the Central district. After mass, which St. Joseph’s celebrates in Tagalong, the language of the Philippines, they gather on the porch of the nearby Hong Kong Law Courts Building. They spread newspapers on its cement floor to sit on, and then spend the afternoon eating and visiting.

I discover some of the women in the group have been here for as little as four months while others have lived in Hong Kong for as long as twelve years. Most have young children at home and are university educated. They are nurses, teachers, physiotherapists, pharmacists, computer programmers and business women. They speak several languages. However they can make three times more money in Hong Kong (the government dictated salary is about $600 US a month) than they can practicing their professions in the Philippines. They tell me they need money to pay for their children’s education. “To give our kids hope for the future”, one woman says. They all send a substantial portion of their salary home to their families.

There are many different organizations in Hong Kong that serve the foreign women working in the city. I spoke with a board member for an outreach program operated by a Baptist organization. They open the premises of a local college on Sundays so the women can meet there. They have a fulltime director, a woman from the Philippines, who develops relationships with the maids and acts as an advocate for them when necessary.

Not all employers treat their maids as they should. Sometimes, domestic helpers have already been taken advantage of, by unscrupulous middlemen in their home countries, who charge them exorbitant prices for work visas and transportation to Hong Kong. As a result they arrive in the city already owing a large amount of money. If they land up with an employer who is not kind, they hesitate to report them to the authorities. They need to keep their job to pay back their travel loan and send money home to their families who are depending on them. It is not that difficult for employers to break their contracts with the women and they cannot stay in Hong Kong unless they have full time employment. It is easy to see why often women tolerate the abuse of their employers rather than take legal action against them.

Some women are sexually harassed. One maid confided she slips a chair under the knob of the door in her room before going to bed, to keep her boss out. Others aren’t as lucky because they have to sleep on a mat on the kitchen floor. One of the Filipino women I spoke to said she sleeps on the floor between the beds of the children in the household where she is employed. That same maid told me she is often hungry. “I can only eat what is left over after my employers have had dinner.”

There are organizations that will help the domestic workers lodge complaints against employers who violate the government regulations that apply to migrant workers. They go to court with them or help them file petitions with the Labor Board.

Of course there are also many Hong Kong families who treat their domestic helpers fairly and with respect. But even in those good situations the women are often lonely for their family back home.

If you visit Hong Kong on a Sunday you are sure to see thousands of maids enjoying their one day a week off. Go up and introduce yourself and listen to their stories.