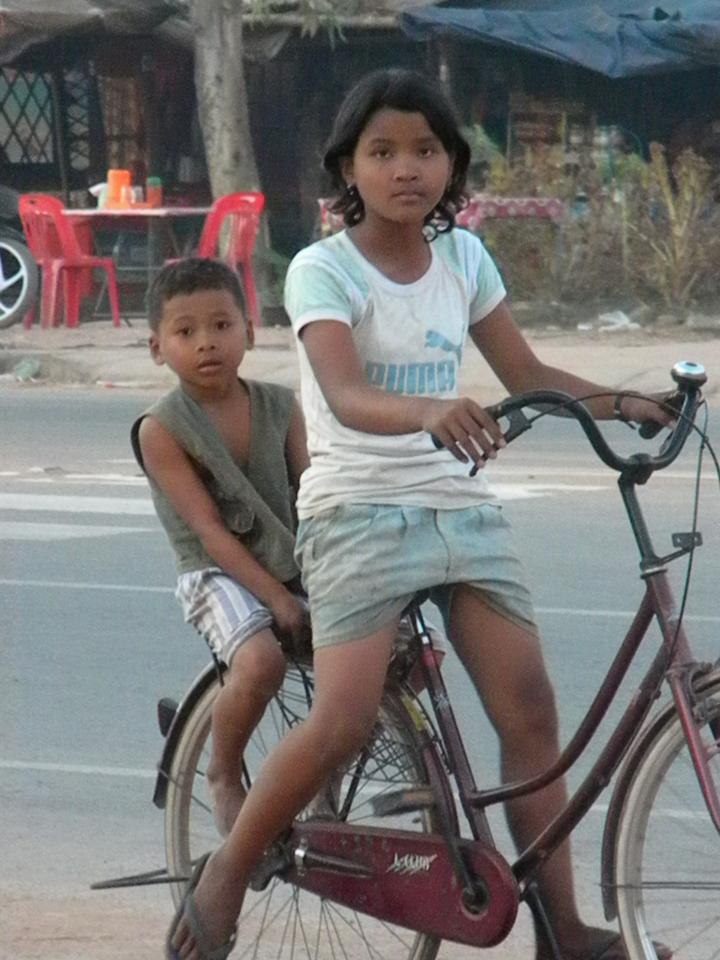 crossing the border from Thailand to Cambodia 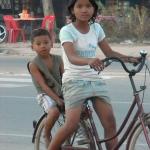 Cambodia and Thailand are right next to each other. They're part of the same peninsula. It seemed like a no-brainer to combine them into one trip. After Thailand, we hoped to head over to neighboring Cambodia to visit the famous temples at Angkor Wat.

Before leaving home, we researched how to go from Koh Chang -our last stop in Thailand- to Angkor Wat.

Turns out, you can't get there from here.

We clicked around in a multiple internet chat rooms. Almost everyone warned about what a nightmare it is to try to get from Koh Chang to Angkor Wat. Most people advised against attempting. Among the people who had success made the trek, every one of their methods was different.

Getting from Koh Chang to Angkor Wat would require three buses, two taxis, and a walk across the border. And if we were lucky, we could make the trip in one day. If we ran into trouble at the border, it might take two days.

I knew this trip was going to be my family's one trip to the Indochina peninsula. If we didn't make it to Cambodia on this trip, it wasn't ever going to happen. Period. I really wanted to go to Cambodia, but it was going to take additional money and an extraordinary effort. For the sake of marital bliss, I had to let it go. While Angkor Wat wasn't on the top of my must-see list, it was still tough knowing that I had gotten so close and wasn't going to see it.

I wasn't going to let missing Cambodia ruin my trip to Thailand.

Can't let the perfect be the enemy of the good.

So the decision had been made.

Or so I thought.

But once we were in Koh Chang, we started to see signs in the windows of all of the tour operators advertising guided trips over the border into Cambodia.

For those of you who know my brother-in-law, you know this ex-military guy doesn't have the words "no can do" in his vocabulary. After brief deliberations, we ducked into one of the tour operators and booked our guided transport into Cambodia.

Early Wednesday morning, our Thai driver picked us up right on time in front of our hotel. At noon we stopped at a little restaurant where we were met by a man who was expecting us. He took our passports and started filling out the paperwork for us. After lunch, he handed us back to our driver. It was still another hour to the border.

At the border, our van pulled in and there was a man waiting for us. Before I fully realized what was going on, our van driver back up and drove off. We essentially had no idea where we were. We were hours from Koh Chang and hours still from Angkor Wat. We were in the custody of a man we had never met before who spoke little English. While our phone still worked, if we ran into trouble, whom would we call anyway?

We were on a little dirt median between two parking lots standing under the weak shade of an anemic little tree. While the guy who would be walking us over the border looked over all of our paperwork, we shifted our heavy backpacks from one shoulder to another and tried to avoid making eye contact with the man who was trying to sell us cheap-looking velvet-covered plastic horse with beady red eyes. Finally, our guide indicated for us to follow him. It was time to walk the one kilometer through the city of Poipet to the border crossing.

The guy in the  chatroom who described the city of Poipet as dirty and crowded was being kind.

At the immigration station, we cued up behind a hundred other would-be border crossers. Mostly they were young, western backpackers. The line did not seem to be moving. With our lack of dread-locks and our blonde-haired children in toe, we certainly stuck out from our fellow trekkers. My nephew sporting his bandana and scruffy beard might have blended in if he weren't hanging out with us breeders.

After disappearing for a minute, our crossing guide returned and said that it might be a couple of hours before we could get across. He paused for a second, looked at me, looked at my brother-in-law, and then said that for US$10 per person, he could get us across in a few minutes. Knowing that we would be cutting in front of all these fellow travelers, my egalitarian American sensibilities recoiled at the suggestion. Furthermore, I didn't like the idea of being squeezed for some extra payola.

My brother-in-law and I conferred quietly. He won me over. We paid the money and sure enough, our guide walked us right to the front of the line. I felt a tinge of guilt as we walked past well-tanned, scruffy Australian Dude and his tank-topped, tattooed girlfriend sitting on top of their overly big backpacks.

For the fourth time that day we allowed ourselves to be put in the hands of a complete stranger who spoke little or no English to be taken who-knows-where. I took a deep breath and had to force myself to not think of all the possible ways in which this could go horribly wrong. I glanced at my wife to see how she was doing. She appeared fine, so I climbed into the van. My daughters followed.

Three hours later -twelve hours after we had started our trek that morning- our driver pulled up to the front door of the "Home Sweet Home" guest house where the staff was expecting us.

Less than thirty-six hours later, we would reverse the whole process and do it all over again.

Maybe that laconic beach vacation down in Phukhet wouldn't have been such a bad idea after all.

I was astounded at the level of organization required of the informal network of men who got us over the border. It reinforced for me the enterprising nature of human beings. Give a man a cell phone, get out of his way, and he will find a way to make a buck.

I would have loved to have been able to talk to all of those people -seen and unseen- who were involved in getting us over the border. I would have asked them who was in charge of all this. But I suspect that I already know the answer to that question. There was no one person who was orchestrating all this from on high. It was an informal network that arose from the ground up. It's the invisible hand Adam Smith talks about in the Wealth of Nations. God bless the free market, spontaneous order, and the profit motive.

Now, about these sheets here on our bed in our seven-dollar-a-night hotel . . . .