A cult of body and beauty develops in post-war Iraq 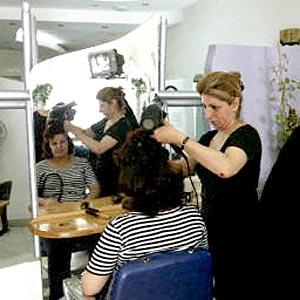 An Iraqi woman has her hair styled at the most chic women's hairdresser in Baghdad. 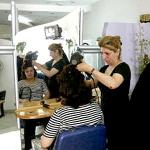 Iraqis have profited from the lifting of sanctions after the US-led war by discovering the pleasures of health and beauty thanks to products and activities that until now were prohibited. Make-up, perfume, slimming tablets, machines to beat cellulite or cocktails to build up a muscular body, which during 13 years of sanctions were only in the hands of the privileged few, are now becoming available to all.

"I'm the best hairdresser in all of Baghdad, and the most expensive, but I don't have enough clients," said Siham, who owns the "Nina and Dima" beauty salon on Arasat street in the capital's most affluent neighbourhood, and which only uses products from Europe.

Entrance to the salon, where women are queens, is strictly off limits to men. Once the doors are closed, the veils and the black cloaks known as "abayas" come off and the women can be seen wearing miniskirts and sandals. "The Islamists are not quiet since the fall of Saddam. I can't leave here and go out onto the street like this. We have to wear the abaya. But nobody will stop me taking care of myself," said 24-year-old Hanan, from Baghdad.

The owner of the business stresses that Iraqi women are obliged to cover their beauty "at the fault of the men". "Behind the veil they are youthful, well-groomed, made-up and beautiful," she said.

Between the cremes, that are "made in France", and the porcelain nails, Iraqi women recall how before the war they could go out alone anywhere or drive their own car, whereas now, they have to be accompanied by a man due to the unstable security situation. "This reduces my number of clients but everything is going to get much better shortly when we have a government," said Siham, who opened her first hairdressing salon on the Arasat street in 1980, employing 10 people.

Siham confessed that Saddam Hussein's wife and daughters were once her clients. "All the women and mistresses of members of the former government came here," she said. The price of a hair cut, two dollars, or a manicure, five dollars, is unaffordable to most Iraqis. "Now the Baghdad hair salons are full of products made in Taiwan or China because they are cheaper. They have flooded the market but I prefer to give my clients quality, and import from France," she said.

If the beauty salons are a woman's paradise, gyms are the preferred place for Iraqi men, who don't hide their preoccupation with sculpting a better physique. "I train every day for two hours. I like a strong body. Iraqi women also prefer this," said 24-year-old Haider. The young men lift weights in an old but popular gym in the city centre called "Elegant body house," which is covered with pictures of the ultimate Mister Universe for those who aspire to one day look like that.

Sabah Talib, who opened the gym two years ago, says that a lot of the young clients who stopped coming after the war are starting to return gradually. "Before the war, I had 500 clients. Today I don't have 300 but that will all change when the security situation improves," said Talib. Muscular Iraqis pay 20,000 dinars (10 dollars) a month to work out in a dirty, badly ventilated place. Women are not allowed to enter for "security reasons".

"I take products that are better for a muscular body and that were previously difficult to find. I do it first for my health and also to please myself. In Iraq, strength and beauty are linked," said a sweating 24-year-old Ali, as he trained in front of a mirror.