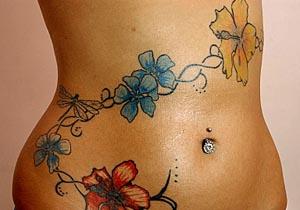 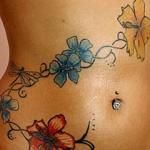 Starlets are reviving an ancient style statement in India, as youth in the land of nose and forehead markings embrace a new generation of body art with pierced belly-buttons and tattoos.

"I love my navel. I think it's just so feminine to have your navel pierced," said Negar Khan, a bubbly 19-year-old who has made it big in India's tinsel town Bombay with her scorching music videos.

In her chartbursting number "Chadti Jawani" ("Rising Youth"), Khan pulsates her belly with its jingling ring, swaying a million minds. "I always show my navel. It's never covered. I always wear a low-waist jeans to show off my belly-button. For me, body piercing is something of a necessity -- like you add spice to make your food tangy," Khan said.

While David Beckham may have Indian script emblazoned on his body, the first parlour to launch the fad in India, the Funky Monkey Tattoo and Design Studio, had to hire trained artists from Thailand. But the parlour's part-owner Hardy Mitra said India was among the pioneers of body art and that the studio, with branches in New Delhi and Bombay, has catered to the fancies of hundreds. "Our women have been wearing the nose ring and 'bindi' (a colourful forehead dot) for ages. It's just the revival of an old art through pop culture. The models are doing it, the stars are doing it, so the girl and boy on the street want it too."

And not just young people. Hardy has seen times when a college girl came in with her mother for a tattoo, and "she liked the work so much, she got one too". "Twenty percent of our clients are walk-in clients -- people who are just passing by and decide to get a piercing or a tattoo done," Mitra said.

"We opened in 2002 and since then there's been no looking back. It's been a roaring business and it seems people were just waiting for us to open shop," she said. The studio is frequented by top Bollywood machoman Sanjay Dutt, who has come for three tattoos, as have top designers and models.

The most popular designs are religious ranging from the devil to the Hindu mantra "Om" to the trident, which is a symbol of the god Shiva.

Such high-end body-art is not priced for the masses. At rock bottom, a simple belly piercing comes at 1,500 rupees (32 dollars) and prices go up with how dainty the spot to be pierced -- 2,500 has to be put down for a tongue. Tattoo prices start from 2,000 rupees per square inch and can go up to 100,000 rupees (2,163 dollars) for a full back, depending on the motifs and their intricacy.

Momaith Khan, 18, has eight piercings including two on her eyebrows which were "very, very painful" and the obligatory navel ring, apart from tattoos on her shoulder and lower waist. "My mother thought I had gone mad," she said. "But then all these rock stars were doing it on MTV and later I saw girls with pierced navels on FTV. I said, why not me. Everyone wants to look good and go high. I think piercing heightens the sexuality and style and adds oomph."

Meenakshi Reddy, who is just out of college, disappeared during a lunch with her mother and friends in a posh New Delhi market -- only to return with a nose bud. "I like the way it looked. It's my way," she said.

Her mother, Sheela Reddy, said she went looking for her daughter, scared the piercing could be made in an unhygienic way. "But then you can never stop them, can you?" the mother said.

For leading fashion critic Anshu Khanna, "the great Indian navel power" has exploded among Indian youth. "It's everywhere -- in music videos, in raunchy film songs and fashion catwalks. And what can be better than a pierced navel?" Khanna asked. But what Khanna said she is really anxious about is her 14-year-old daughter who has her ears pierced and wants more. "She says it's not enough," Khanna said.