Deep Down Under the Middle Kingdom 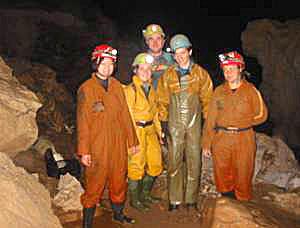 Cavers on a break 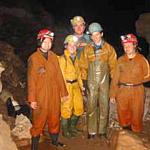 The sun was moving down behind a cloud bank in the west; within a couple of hours the light of day would give way to twilight. We weren't at our destination yet, despite having set out many hours ago with less than 100 kilometers of actual driving. Our driver had been hired for the day, and was not happy about being kept out past sundown. Worse still was the inevitable damage that driving on rutted, boulder strewn back roads was doing to his overloaded and borrowed van. But there was nothing to be done about it now but to press forward. Lack of natural light wouldn't be an issue where we were headed. We were going underground.

I had hooked up with the Hong Meigui Cave Exploration Society in Yangshuo a few weeks before after striking up a conversation with Matt, a twenty-somethingish Englishman who was busily poring over maps over cups of strong Yunan coffee. Yangshuo is a magnet for climbers, so I assumed that he was planning a climbing route. "Going rock climbing?" I asked. "Opposite direction." He replied. "I'm a Speleologist - a caver. We go down and under."

Intrigued, I asked if I could tag along on their next expedition. The next Saturday, our group (which consisted of three members of the club, myself and two other first-timers) lit out for the site after breakfast. Our first stop on the way to the site was the amazingly cluttered storeroom of the club on the campus of the Guilin Karst Institute.

"We need to do is to get you fitted with a wetsuit," Erin tells me. "You can borrow one of mine."

"Because" she answers "You're going to get very, very wet."

I hadn't anticipated this, picturing a cave as a crack in the side of a mountain leading into a cavern filled with stalactites, stalagmites and bats. Matt explains that caves come in two basic flavors - wet and dry. The one we'll be going to on this chilly January day is what is known in caver's parlance as a river cave. "We might have to do some swimming, but most of it should be wading." He says, "You're probably right about the bats, though."

Getting into a tight fitting rubber suit is not the easiest of feats. At one point I ask in jest if there were any Vaseline around, and was surprised when one of the other cavers handed me a jar of the stuff. I managed to get in, but it was so difficult that I elected to keep the thing on for the ride out to the cave, praying all the while that I didn't find myself having to take a leak.

The site we're heading to is in remote Guangxi province, outside of a village called Hai Yang. Mapped out by British Cavers in the '80's, Erin had been there a few years before. "This cave is a really good one. You're lucky that you're doing this one as a first" she tells me "We did a river cave close to an industrial area in Yunan province not too long ago, and the water was foul." During the long, bone jarring ride down a road better navigated by oxen, Matt and Erin fill me in on why China is becoming known as an A-list destination for cavers.

"China's an amazing place for caving." Says Matt "Peak Cavern (one of the largest sites in Britain) is fairly poxy compared with even some of the medium sized caves to be found in China. And Britain's been pretty well mapped out. Not much of a chance of finding something unexplored back home."

China, however, offers tremendous opportunity for exploration, with the possibility of finding truly awesome - and possibly undiscovered - sites. Of course, with caves so spread out over such a wide area, seeking out the unknown becomes quite a chore. "What we find works best is to find an area that is geologically likely to have caves, and then go around and ask farmers if they know of any. The local kids usually know where the best caves are."

After much jostling, a few wrong turns, and many short stops to ask for directions from curious looking farmers (our driver spoke the local Guangxi dialect, which helped immensely) the van was as close as it could get. The only problem now would be finding the cave entrance. Erin had been here before, but it had been a few years.

"A good strategy is to find a stream and follow it," She says "but this doesn't always work."

After plodding along the river in our rubber boots, we are faced with a quandary. The stream dips underground right under a field of gigantic boulders at the base of the mountain. This makes tracking it to the entrance more difficult. This also means that we'll have to climb up and over the boulders before heading down under the mountain. Climbing wet rocks is never easy - doing so wearing constricting wetsuits and rubber fisherman's boots is extremely challenging. While the first-timers stay on top of one of the boulders, the more experienced cavers headed on to look for a way in through the maze of boulders. ("Speleologists refer to this as a ruckle" Erin tells me).

The minutes tick away as the sun creeps ever closer towards the tops of the western hills, and I wonder if we'll even make it into the cave before dusk. Suddenly, we hear a shout from someplace down below.

Following the sound of Matt's voice, we scramble down the boulder's face and across a short field of stones to a crevice at the base of the mountain that's partially jammed by a fallen boulder. We see a light shining up from below. "Climb down the hole - there are plenty of handholds.

We turn on our headlamps and climb, and after a short descent in a twisted semi-vertical shaft; we are in a narrow chamber. This, it turns out, isn't really a part of the cave, but more of an antechamber. A few minutes later, we are again under open sky, with a river leading into a large fissure ahead, and massive boulders behind us.

"Going under the boulders is easier than going over them" Matt explains.

The group back together, we wade single file through hip-high water as the last traces of natural light disappear behind us. Save for the lights on our helmets, it is pitch black, and I find the fact that we have spare batteries on hand comforting. After a few dozen meters, the passage opens up considerably, and we are able to spread out a bit. At some points, the water is only knee deep, but at one point the bottom drops out of the stream, and I discover that a good wetsuit both keeps body heat in and acts as a flotation device. Keeping my rubber boots, now filled with water, from getting pulled to the bottom is another matter. (Some cavers drill holes in the sides of their boots for just this reason).

The passageway constricts up ahead, and we are faced with a choice of climbing over a series of large boulders or of swimming around them. I can't get any wetter, and chose the river. Everybody else takes the dry road. Past the boulder, the cavern opens up into an area large enough to play Frisbee in, an enormous chamber with the river running down the center and rocky, dry beaches on either. A real estate trickster could divide the place into lots and sell it to unsuspecting buyers as "riverside property" without technically lying. The cavern is much bigger than I'd thought it would be. Matt tells me the cave we're in isn't particularly big, by Chinese standards. While not large to the veteran cavers, the cave we're in is far larger than what I'd expected, and goes deeper into the earth than we're prepared to go that day. At a skylight (a huge crack in the roof of the cave) up ahead that marks the approximate halfway point in the cave, we turn back.

About an hour later, we're slogging through a swamp and looking for our van while munching on soggy Snickers bars. "This cave is really just for practice", Erin tells me "In the fall we'll be returning to Tian Xing in Chongqing to continue exploration of the two deepest caves in China, hoping to connect them. We have limited support from a caving grant-giving body in Britain, but we could sure use some sponsors, and everything from chocolate bars to rope is greatly appreciated."

This article originally printed in City Weekend Magazine. The author would like to thank Erin, Matt & Duncan of the Hong Meigui cave exploration society for being excellent guides, and Erin in particular for use of the wetsuit. For more information on the club, log on to their website, www.hongmeigui.net.