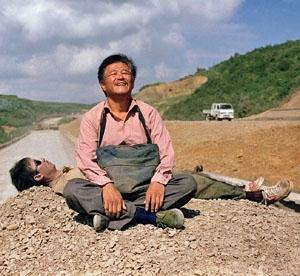 Zhao Hitches a Ride to Three Gorges in 'Getting Home' 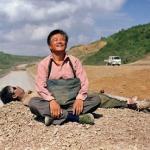 Unfinished Girl
Written and directed by Cheng Er
Country: China
What begins as a medical tragedy soon becomes a murder mystery for Xiao Ke, a young woman who was orphaned as a child when her parents were murdered, and in adulthood she is destined to die young from a brain tumor. Despite her struggle to cope and survive, she leads a seemingly normal life. Between medical exams and treatments, she works a day job, maintains a close relationship with her sister and brother-in-law, and even hopes to find love. But during a potentially romantic encounter with her employer, she discovers that he is in possession of two of her family's heirlooms, a silver picture frame, and her father's watch. Suspicion leads her to revisit her childhood tragedy, as she investigates the possibility that someone very close to her may have committed the crime. And as the pieces fall into place, obsession fuels her brutal methods of getting to the truth.
Written and directed by Cheng Er, Unfinished Girl is a study in the dark side of human nature, of the sinister elements that lurk behind the facade of ordinary lives. Oblique in its story-telling, with understated cinematography and unassuming performances by Gao Yuanyuan, Xu Zheng and Tao Hong, Unfinished Girl is a subtly disturbing yet satisfying mystery.
High Ambitions in the Himalayas
A Documentary by Curt Dowdy
Country: USA
Life takes on a whole new meaning at 27,000 feet, as an expedition of hardy mountaineers tackle Cho Oyu, Everest's neighbor and the world's sixth-highest peak. The cast of climbers includes: Filmmaker Curt Dowdy (USA), a former Hewlitt-Packard executive and Internet entrepreneur; Dr. John Taske (Australia), a survivor of the 1996 Mt. Everest tragedy; Hall Wendel (USA), a seven summit climber (Everest, Aconcagua, Denali, Kilimanjaro, Elbrus, Vinson Massif, Carstensz Pyramid, and Kosciuszko); Raymond Behm (Luxemborg), Iron Man Triathlon athlete (Hawaii's three endurance events, including consecutively a 2.4 mile ocean swim,  a 112 mile bike ride, and a 26.2 mile marathon); Bernhard Dobler, Austrian mountaineer, and Dietmar Voss, Australian mountaineer.
With the guidance of sherpas Ang Dorjee and Ang Tsering, the six men begin their journey with a hike to the Cho Oyu base camp at 18,700 feet. Farther up the slopes, there are three more camps, one at 20,700 feet, a second at 23,000 feet, and a third at 25,000 feet. Before they challenge the summit, over the course of about three weeks, the expedition will embark upon a series of three acclimatization exercises, during which they climb progressively higher and then return to base camp, which enables their bodies to adapt to reduced oxygen levels at extreme altitudes.
Foreboding reports of  a Korean expedition leader who died of altitude sickness, and a Swedish woman who suffered a stroke, overshadow their trek to the summit, and each climber faces his own limitations as well. Dietmar Voss struggles for breath, Hall Wendel is hobbled by bursitis in his left knee, and Raymond Behm loses forward momentum within a few hundred feet of their lofty destination. In the words of Sir Edmund Hillary, "It is not the mountain that we conquer, but ourselves."
Even with the endurance and courage of the climbers as its focus, perhaps the most impressive elements of this film are the constant yet unobtrusive presence of the filmmaker and the nimble sherpas, who traverse the forbidding slopes of Cho Oyu seemingly unfazed. Both remain outside the perimeter of the spotlight that has been cast upon the travails of the climbers, seeking no glory for themselves. For the sherpas, it was just one of many trips up the mountain; and Curt Dowdy not only climbed Cho Oyu, but also filmed a powerful and compelling documentary in the process.  A commendable feat indeed.
Family Inc.
Directed by Emily Ting and Helen Jen
Country: Hong Kong
Welcome to Plushy Robotic Toy Manufacturing 101. Charles Ting is a 30-year veteran in the business of manufacturing battery operated singing, dancing plushy toys at his Hong Kong facility. His products are sought after by major U.S. retailers and his company has a long-standing reputation as an innovator in the industry. His elder son wants no part of the business, so the filial obligation falls to his eldest daughter Emily, an educated young woman with a promising career in filmmaking. Burdened with the onus of following in her father's footsteps, she turns the camera on herself and the family business. What she doesn't know going in is that Dad is not only in financial straits, he's in the throes of a divorce from his third wife that may prove his undoing.
To the casual observer, Emily lives what might seem to be a perfect life in a stylish Hong Kong penthouse with closets full of clothes, shoes and handbags. Her finace, an American man whose parents are also in the manufacturing business in China, appears to be there for her at every turn. Yet poor Emily doesn't have a minute of her workday left over to enjoy. Her father is chastising to the point of cruelty at times, her family dynamics are fragmented and strained, and the family business is on the brink of bankruptcy. So why does she do it? Seems it all comes down to family expectations, gratitude, and devotion.
Family, Inc. is an unvarnished account of one woman's dilemma, told with both candor and an undertone of resentment and ambivalence. What's the fate of Emily and TL Toys...a Hong Kong back-alley palm reader sees money and power in her future, but Emily's not fully convinced it's worth it.
Cinequest 18 opens February 27, 2008 in San Jose, California. For venues, show times and further details on these and the dozens of other films featured at the Cinequest 18 Film Festival, visit the Cinequest website.