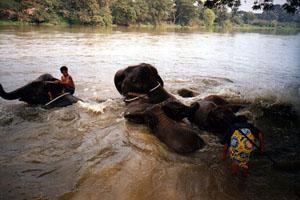 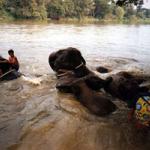 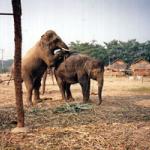 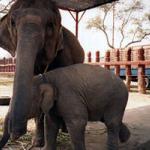 My wife and I have just arrived at Ayutthaya after a short holiday in Bangkok, and were rather bemused by the antics of the baby elephants. We initially heard about this camp from an e-mail sent by a friend who visited Ayutthaya. So after several days of wallowing in five-star hotels in Bangkok and stuffing ourselves silly with the delicious Thai food, we arrived at the camp in shorts and t-shirts for our short stint as volunteers.

The babies, aged three, four and five were rocking back and forth incessantly in their miniature shed -- the only possible movement open to them as they pull at the chains that hold their legs down to the ground. The visitors are a welcome distraction to the babies, all orphans captured from Northern Thailand, but their rocking doesn't stop, even as they lift their trunks to greet us, beckoning us to touch them.

According to a "mahout" (an elephant carer and trainer) at the camp for displaced logging elephants, these aimless movements are caused by the inherent behavior of elephants.

"Elephants are great wanderers and this state of immobility has brought about the "stereotypic" behavior when they are immobilized," he explained in Thai.

Dr Jimmy, a vet volunteering his services at the camp for a month, informed us that elephants are highly intelligent and social animals, and the lack of mobility and opportunity to interact with one another causes them deep distress.

"In spite of their size and weight, they are really gentle animals. Once you get to know them and they get to know you, you will see the true qualities of their gentleness. The introductions and the process of striking the relationship may take some time but once established, it lasts forever," he said during the orientation for new volunteers, adding that 'this is why elephants are so highly revered in the ancient Khmer and Thai empires.

Elephants only turn aggressive when they feel threatened. All living creatures fear the unknown. Ignorance creates fear but knowledge brings courage. The success stories of taming and training wild animals is based on knowledge, inner love for animals and, of course, perseverance.

During our short stay, we learned so much about these graceful and precious animals. My wife and I now have more knowledge about their habitat, eating, sleeping habits and best of all their amazing individual personalities. One would never guess an elephant could possess such emotion as human but it was proven they do. The elephant that was to be "ours" was a grand dame called "Pang Ban Cheon". "Pang" refers to a female elephant without tusks and "Ban Cheon" is her name. She is 45 years old this year and was a logging elephant displaced from the north when the logging ban came into force.

Besides seeing how the elephants live, we also had the opportunity to witness several elephant performances performed for tourists to raise funds for the not-for-profit camp. We never fail to be fascinated by the extraordinary performances of circus animals and yet we give little thought as to how they are achieved. Only the person who has gained the trust and confidence of the animal can direct it to do the feats it has been trained for. It just goes to show how important relationship is to all of us in this world.

A parade of four elephants of different sizes and ages made their grand entrance on a makeshift performance arena, led by the smallest of them. As their names are announced one by one, the elephants raised their trunks and flapped their ears in acknowledgement. One of the elephants even went round shaking trunk with the tourists!

The elephants performed various stunts after being prompted by the mahouts. In one act, the smallest elephant carried a little boy by its trunk all around the arena, putting him across its tusk, and nudging him playfully with its head. These gentle actions were definitely not qualities of brute force that we tend to associate with large animals.

When two elephants had to carry a mahout in the lateral position by his hands and legs and then walk around with him suspended in the air, it required understanding and careful handling between the two elephants. Otherwise the man could be severely injured.

The most convincing act, of the animals' concern for others, was when the elephants were made to walk in-between guests lying close to one another on mats. The space between the people lying down was just enough for an elephant's foot. One false move and the chest or abdomen of the volunteer lying down would be crushed.

One cheeky elephant, however, purposely missed its step and placed its massive foot hovering above a volunteer's chest. To prolong the apprehension of the guy lying down, it paced forwards and backwards, besides lightly placing its foot on the man's chest now and then.

The whole act was very delicate, especially considering the mass of the animal -- even baby calves weight between 300 and 400 kilograms each.

However, Dr Jimmy informed us that the elephants used for the performances are highly trained, older elephants. Usually, female elephants are used in the performances because they are more docile and obedient. Male elephants, especially the older ones, can be rather aggressive. The babies, on the other hand, are too playful and may not obey commands all the time.

Despite the better treatment at the camp, most of the elephants here have a rather sad past. Many female elephants have memories of their young calves dying due to lack of maternal care during their logging days in the north while the female elephants are being overworked by loggers. Some elephants have even been fed amphetamines by their owners to make them work harder at the logging areas!

So what did we volunteers do besides being entertained by the elephants? Well, after breakfast every morning, we will feed the elephants. After that, we will help clean the pens belonging to the baby elephants. Later, it is bath time for the elephants. The elephants really enjoy being scrubbed with bristly brushes and splashing around in the river and wetting each other (and us volunteers!) with their trunks.

Some traumatized baby elephants need special care. This include being fed bottled milk and vitamins, cleaning their poo and treating their wounds. Most volunteers involved with this are the more experienced ones, with newer volunteers helping by sterilizing milk bottles and the likes. Some babies even get nightmares in the middle of the night, and need their mahouts to comfort them! Yes, taking care of a baby elephant is just as demanding as taking care of a human baby, even more so in some cases.

After four days, it was time to say goodbye to our elephant friends. What an experienced it was, playing and taking care of these poor pachyderms. During our time there, we learnt that man must live in harmony with the environment. He must recognise and acknowledge the importance of other living things in providing quality and richness to his life. We must not exploit others to enrich our own existence. We must learn to share, to give and not just to take. Be like the elephant -- gentle, fair and considerate.

All volunteers are required to contribute a sum of money to help in the upkeep of the elephants.