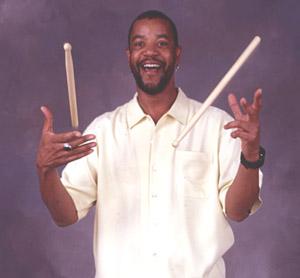 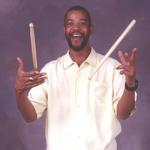 An ancient Chinese proverb says, "A wise man does not need elaborate explanations; the good drum does not need a heavy hammer," and an hour spent chatting with percussionist Ralph Hardimon might convince you that those words were written just for him. As a musical composer, a percussion instructor, and as a mentor and friend, Ralph has spent his life and his career practicing the philosophies expressed in that simple metaphor.

Born in 1952 in Oklahoma City, Ralph comes from a very large and very musical family. "I have five sisters and three brothers, all wonderful people thanks to my wonderful parents. I discovered my love of music when I was four or five years old. My sisters played violin, viola and cello. We had a family choir, my parents were musically inclined, and we all had music lessons."

Ralph graduated high school in Los Angeles, and went on to earn a degree in music performance from the University of Oregon, where he studied with Charles Dowd. His professional career began in the late sixties as a marching member of the Los Angeles Police Band. From there, he went on to perform with the Velvet Knights Drum and Bugle Corps, and the Anaheim Kingsmen. His time in the early seventies with the Anaheim Kingsmen launched a career in composition and arranging, and Ralph later became Director of Percussion for the famed Santa Clara Vanguard from 1976 through 1990.

After many years spent living and working in San Francisco, Ralph now lives in Denver, Colorado in a 90-year-old restored historic home filled with every kind of percussion instrument imaginable... "I have snare drums, field drums, Basel field drums made for me in Switzerland, I have conga drums of all types, bongos, bata drums and timbale drums all from Cuba, as well as an assortment of cow bells from Cuba and Africa, and bells from Switzerland called omgloken. I have many hand drums from the middle east called dumbeks and oudu, and some Moroccan clay drums, I also have steel drums from Trinidad, tambourines from Brazil and Morocco, I have tabla drums from India, and American Indian drums from Colorado and Mexico, I also have some Djembe and Djun Djun drums from Africa, and many sound effects such as whistles, rattlers and gourds from around the world."

Why Denver? "Well, first of all it's a more central location for travel around the states," he says. "And...I wanted to teach a group out here that was in the dumps. I brought them up to seventh in the nation and third in percussion. Not bad for being at a steady 25th to 30th for all those years."

Ralph's career has also taken him throughout the U.S., Europe, the Orient, and most recently to Japan. In 1997, Ralph was contracted as a freelance drum corps percussion and field show coordinator for Sokagakai International, a Buddhist sect with schools all over Japan. Ralph now travels to Japan about seven or eight times a year, to the cities of Tokyo, Kagoshima, Nagoya, Osaka, Yokohama, and Okayama to work with percussion ensembles, marching bands, and drum corps for Drum Corp Japan.

"Work begins in late February or early March," he says. "It takes about a month to choose the music, and to work with designers, choreographers and other music composers to design the program. The school year ends with the championships in mid January."

To prepare his corps for the competition, Ralph composes the music, teaches it to his students, coordinates the pacing and timing of the show, and works with the designers and choreographers to create a fully integrated field performance. He has an interpreter who helps him teach the material, and Ralph has even developed a customized percussion exercise program for endurance, timing, and technique.

In response to working with Japanese students, he says, "They're pretty excited because I'm very different from them. I'm a harmonious person, but I'm also pretty strict. We work by the clock, so we have to accomplish the day's work by a certain time. But we have fun mostly, because I'm pretty fun even when we're doing serious work. But I guess I'm also your typical sensei. I crack the whip when it's time."

Regarding his own reaction to living and working in Japan, Ralph says, "With international work, you have to take the good with the bad. It's pretty tiring. And there are always cultural differences, but there are parallels as well. Mostly I like working where I get respect."

"When someone hires you," he continues, "they hire you for your expertise. But you also have to respect their differences. You've gotta be humble. And you have to make sure you have room upstairs for another culture."

Between trips to Japan, Ralph spends his leisure time mostly by himself in Denver, where he enjoys bicycling, camping, writing percussion music, and watching movies. When asked whether he'd seen a recent Hollywood film called Drumline, which delves into the highly competitive world of college-level drum corps field performance, and whether it was a fair representation of his milieu, Ralph says, "Hey, I thought the movie was great! It's pretty true to my world as well, but a bit different. We are a lot more precise with the clarity of what we do, and they are more show oriented. But music and drumming are pretty much the same everywhere!"

As one of the leading authorities in marching percussion, Ralph Hardimon's growing list of accolades is long and lustrous. He has been honored with five high percussion awards and four world champion titles. He has scored music for many other corps as well as college percussion ensembles and marching bands that received prestigious awards and recognitions.

In addition to marching percussion achievements, Ralph has also been successful in the recording industry, with Grammy nominations for jazz, and rhythm and blues, as well as receiving a gold record for rhythm and blues. And in 2000, Ralph was inducted into the Drum Corp International Hall of Fame.

Ralph also acts as an endorser and clinician for Evans Drum Heads, Sabian Cymbals, and Vic Firth Inc., for which he has designed five signature drumsticks. "Vic just called me up one day and asked me if I would like a signature drum stick, and I said, 'Yes!' So now I have five signature sticks, and doing well."

In the entertainment business, Ralph has worked for Disney, the Olympics, and bowl games such as the Citrus Bowl, Orange Bowl, and even the Super Bowl.

When asked about his experience working at Disney he says, "It was a lot of fun because I had a chance to meet lots of different kinds of people I might not otherwise have gotten to meet in the neighborhood where I lived L.A. It was pretty diverse in terms of race and culture."

Regarding his work with the bowl games, he says, "I was with a team that did all the coordination for the shows. Some of the music I arranged and wrote. Most of the shows had many parts to them, my portions were with all aspects of drums and percussion, sometimes recording the music I arranged, and a lot of teaching of music for the shows. With so many mass bands involved, it was a lot of pressure, but lots of fun as well."

Ralph's vision for the future is a simple one: "To continue teaching as long as I can." Yet another ancient Chinese proverb says, "The first thing a child learns when he gets a drum is that he's never going to get another one." How fortunate for the world of percussion and music education that Ralph Hardimon's wise and wonderful parents believed otherwise.