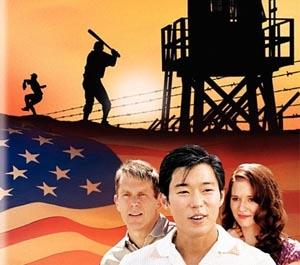 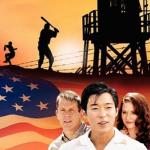 Life throws Lyle Nomura a curve ball when he lands in a WWII Japanese internment camp instead of going to college on a baseball scholarship. Internment camp guard Bully Burrell knows baseball disappointment as well, since his career came to a dead end in the minor leagues with the onset of the war, yet he still dreams of being called up to the majors.

Despite the social injustices suffered by the thousands of both Japanese immigrants and Japanese-American citizens, daily life goes on as close to normal as possible for the nearly 8,000 detainees in the Topaz, Utah Relocation Center. Families are housed together in large barracks, where they perform daily chores, share meals, and engage in hobbies and pastimes. For Lyle Nomura, it's playing jazz on his saxophone, for his father Kaz, a former minor leaguer, it's forming a Topaz baseball team with Lyle as his star pitcher. But when Billy Burrell, a catcher for the Utah Bees, sees them practicing, his alpha-male hackles are raised and he's determined to show them who's boss.

Tensions mount when Lyle takes a shine to Burrell's daughter Katie, who teaches music at the Topaz camp. But the two lovebirds manage to keep their relationship a secret, until the town barber and one of his pals rough up Lyle, and Katie's concern for him renders her transparent to her father. Lyle's injuries make him ineligible for a college scholarship being offered by the Quakers to one Japanese internment camp detainee, and his dreams of eloping with Katie are dashed.

In a subplot, Lyle's older brother Lane deals with his anger and frustration at being interned by enlisting in the U.S. military, and is sent to Camp Shelby, Mississippi to serve in the Japanese American 442nd Regimental Combat Team. But when he returns to Topaz as a decorated war hero, he is refused a haircut by the bigoted barber.

About the time that the drama reaches critical mass, Kaz Nomura challenges Burrell to a grudge match, and Burrell even arranges leave for them to travel into town to play the game at Anderson field, in hopes that a scout from the majors will attend and his dream of playing for a major league team will finally come true. But a crucial play in the final inning forces Burrell to choose between victory and honor.

Although American Pastime has the dark issue of Japanese internment at its core, the film still manages to stay wholesome and squeaky-clean throughout. And Desmond Nakano deserves kudos for casting a spotlight on two significant historical facts: That throughout the course of World War II, there was not a single incident of treason or espionage by anyone of Japanese heritage, and that the Japanese American 442nd Regimental Combat Team were among the most valiant soldiers who ever served in the U.S. military.