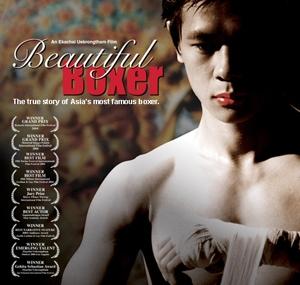 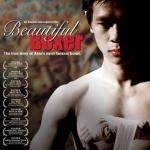 Based on the life of Parinaya Charoemphol, Beautiful Boxer tells the story of a young man who leads a double life: one as a Thai kickboxing champion, the other as a transvestite who lives in hopes of someday undergoing a sex-change operation. Born in Chang Mai as a baby boy named Nong Toom, he is the son of a married couple who earn their livelihood by selling lychee fruit from a small family orchard.

Nong Toom recognizes his cross-gender tendencies early on when he witnesses a Thai dance performance. Fascinated by the graceful movements and elegant costumes of the dancers, young Toom begins experimenting with make-up, and staging dance performances for his family.

As a boy, Toom is sent to a Buddhist monastery, and is later assigned to follow a traveling monk. In the interim, his parents are unjustly arrested because the family home in which they live was built with illegal timber. As an adolescent, quite by chance, Toom enters a Thai boxing contest for which the prize is 500 baht. When he wins, Toom realizes that his ongoing participation in the sport is a practical and profitable way to earn money to help his parents with their legal and financial problems.

Toom soon joins a Thai boxing dojo under the tutelage of Pi Chart, a seasoned coach who was once a champion himself. Early on, Toom is befriended by Pi Bua, a resident cook and housekeeper who recognizes, encourages, and facilitates his cross-dressing urges. And when Coach Pi Chart catches them playing dress-up with Pi Bua's make-up kit, ironically and quite unexpectedly, he suggests that Toom reveal his true self in the boxing ring.

Having already established himself as a world-class competitor, Toom's new persona skyrockets him to fame when his opponents take his effeminate appearance as an affront to their masculinity. After all, no respectable Thai boxer wants to be taken down by a she-male. But the harder they fight, the more valiant and sensational are Toom's victories. And the more celebrity he gains, the more flamboyant his costumes and make-up. But when his desire to fulfill his transsexual dreams supersedes his status as a boxing champion, Toom is faced with the ultimate decision.

Directed and co-written by Ekachai Uekrongtham, Beautiful Boxer stars Asanee Suwan, a Thai kickboxing champion with no prior acting experience. His resemblance to the real-life Nong Toom is remarkable, and despite his lack of experience, he fulfills the role with the flair and finesse of a pro. This award winning film handles a controversial subject with subtlety and sensitivity, ever mindful of the delicate balance between masculine and feminine, between the brutality of the sport and the too-often grotesque portrayal of transsexualism. Beautiful Boxer is both visually alluring and emotionally uplifting. And regardless of the viewer's sexual persuasion, it contains the universal message of accepting one's own true nature and holding strong to one's convictions, no matter the cost.

Beautiful Boxer is available from Amazon