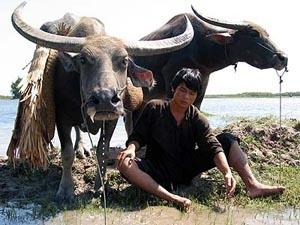 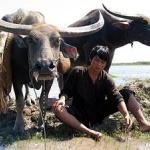 Water is a way of life for much of the year in the southern lowlands of Vietnam. When the monsoon season sets in, everything that isn't tied up, nailed down, or raised on stilts is washed away with the tide. Of special concern is the welfare of the livestock, which must be herded to higher pastures so they don't die of starvation during the flood season. Farming families pay teams of hired herders to guide their individual buffaloes or small herds to the highlands in search dry pastures.

For one farmer named Dinh, who is deeply in debt and has taken ill, saving his pair of buffaloes is so crucial to the survival of his family that he sends his only son Kim to take them and join up with foreman Lap's team on their way to Mt. Ba-The. Along the way, Kim learns the ropes, including the tragedy of buffaloes that die along the way, and the perils of rogue gangs who attack in the night. Once the rains subside and the flood waters recede, Kim returns home, but with only one surviving buffalo. By this time however, Dinh has reached the end of the line with his creditors, who are demanding that he sell his buffalo to pay up. With nothing left to carry on, Dinh and his wife head for U Minh to work as land guards, and Kim strikes off on his own to work with his friend Det as independent herders.

Despite the fact that they are competing with Lap's team, Kim and Det manage to gather a small herd for hire, and along the way, they meet up with Kim's old friend Quang, as well as Det's lost love Ban, mother to his young son Thieu. Together, they navigate their way to U Ming, where Kim learns that his father has taken ill, and his mother has left him. And when Kim goes in search of his father, he knows not what sorrows and secrets await.

Buffalo Boy is the cinematic masterpiece of one amazing man: Ming Nguyen-Vo. A Vietnam native, Nguyen-Vo spent his days watching movies in a small-town cinema operated by his parents as an antidote to the ever-present conflict of the war going on around him. As a young man, Nguyen-Vo received a scholarship to study Aerospace Engineering in France at the Université de Poitiers, and completed his post-graduate studies in California at UCLA, where he earned a Ph.D. in applied physics, specializing in quantum electronics using lasers and holographics. However, even with such lofty scientific endeavors, Nguyen-Vo also found time to study screenwriting and directing through the UCLA extension program, during which time, he completed the award-winning screenplay for Buffalo Boy, inspired by a collection of short stories by Vietnamese writer Son Nam.

With a budget of less than a million dollars, Nguyen-Vo was able to film entirely on location during the flood season, with a herd of 300 buffalo and no use of computer graphics. With the exception of only three supporting actors with other credits to their name, Buffalo Boy stars a cast of neophytes for whom this is their first and only film credit. And the actors with previous credits include such notable films as Owl and the Sparrow, Scent of Green Papaya, and Cyclo. Buffalo Boy screened at more than 60 international film festivals, where it received several prestigious awards, and was Vietnam's official submission to the 2006 Academy Awards.

In addition to its poignancy and cinematic beauty, Buffalo Boy is one of those eye-opening films that pays homage to human endeavor and the hardships of survival, both in the making of the film itself, and in the story it tells. And what a story it is.