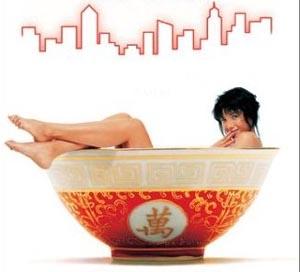 Eat a Bowl of Tea 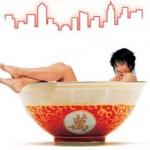 Chinatown New York was a dreary place in the decades before World War II. Not because of its dark alleyways, or its dusty mah jongg parlors, but because of its conspicuous lack of women. In the pre-war years, Chinatown New York was populated mostly by Chinese men who had come to America to seek their fortunes, leaving their wives behind, as the U.S. government would not allow entry to Chinese women. But with so many Chinese men having served on the battlefields of World War II, the government rescinded the restriction barring Chinese women, and war veterans were allowed to bring their brides to America. Wang Ben Loy is one such veteran.

Having served in the U.S. army and lived to tell, Wang Ben Loy comes home to face new challenges: Giving up his playboy lifestyle, traveling to China to meet Mei Oi, the bride his parents have chosen for him, and bringing her to the U.S. to fulfill his parents' dreams of grandchildren. And although the newlyweds are well-suited for each other and seemingly happy with the match, Ben Loy's biggest challenge is his inability to perform his husbandly role in the bedroom, leaving his young bride frustrated and disappointed. Ben Loy's only coping mechanism is to become a workaholic, leaving Mei Oi to her own devices for hours on end. And in a town virtually bereft of the fairer sex, it isn't long before Ah Song, the local roue swoops in to take advantage of Mei Oi's delicate predicament.

And although post-war Chinatown may lack women, it has no lack of gossips, as the old men sit around the mah jongg tables and the barber shop for hours on end with nothing better to do than discuss the minutae of their mundane lives. Rumors of Ben Loy's shortcomings in the bedroom and Mei Oi's infidelity spread like a virus through the Chinatown community, with disastrous results.

Directed by Wayne Wang, of Joy Luck Club fame, Eat a Bowl of Tea is an intimate portrait of the lives behind the alluring façade of 1940's Chinatown. Smoky, sepia-toned sets create the mood of secrecy, intrigue and gossip, and the understated performances of Cora Miao, Russell Wong, Victor Wong, and Lau Siu-Ming leave as much implied as revealed. And the most rewarding revelation of all is the subtle punchline conveyed in the title.

Eat a Bowl of Tea is available on VHS and DVD from Amazon.com.