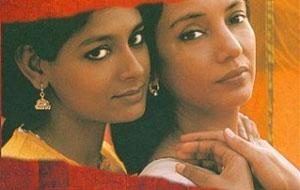 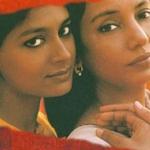 Dysfunctional doesn't begin to describe the family dynamics in this sexually charged drama written and directed by Deepa Mehta. Sita, a newlywed just back from a three-day honeymoon, is already worried that something is wrong in her arranged marriage to Jatin, who is in love with Julie, his long-time mistress.

Not long after Sita and Jatin settle into the family home, which doubles as a restaurant/video rental shop, Sita learns that Jatin's brother Ashok and his wife Radha are unable to conceive a child. And because Ashok believes that sexual intercourse for purposes other than procreation is sacrilegious, he joined the disciples of a swami to help him resist the temptations of the flesh, leaving Radha in a perpetual state of sexual frustration for thirteen years.

Yet amid this Faulkner-esque family venue, Sita and Radha form a sisterly bond, and begin carrying out their household duties together. With Jatin busy romancing his mistress, and Ashok obsessed with his religious asceticism, the two women are left to their own devices for hours, or even days, at a time. And within this proximity, that sisterly bond becomes so much more.

The first of Deepa Mehta's elements trilogy, Fire, Earth, and Water, this 1996 film is based on Lihaf (The Quilt), a 1941 story by Ismat Chugtai, and it is unique in that it is the first cinematic work to explicitly portray a homosexual relationship. But within that context, the themes of rote tradition versus individual freedom and self-expression are also explored. Performances by Shabana Azmi and Nandita Das as Radha and Sita are sincere, authentic, and yes, erotic, but without indulging gratuitous sexual voyeurism. Nonetheless, Fire sparked widespread controversy that culminated in riots outside the packed cinemas where it screened, and ultimately in government intervention.

Regardless of whether India was ready to receive such a film, Fire is worthy of recognition and praise, not only for the bold steps it took toward bringing about sociological growth, but also for the subtle aspects of intimate relationships and human interaction. See it for both.