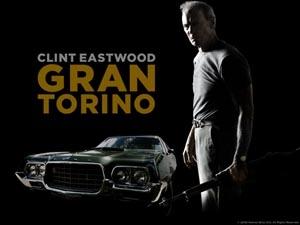 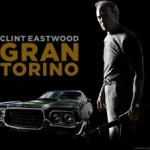 Clint Eastwood delivers yet another flinty performance, this time as Walt Kowalski, an ornery, recently widowed Korean War veteran in a neighborhood where the residents are predominantly foreign immigrants. Holding fast to his deep-seated racial prejudices, Walt has nothing but contempt for his Hmong neighbors next door, but when a carload of local thugs try to drag their teenage son Thao into the gang, Walt intervenes with his M1 military rifle and suddenly becomes the neighborhood hero. Tensions escalate as the gang persists in its pursuit of Thao by challenging him to steal Walt's prized Gran Torino. But when Walt catches him in the act and Thao's mother finds out about his attempt at grand theft auto, she sentences Thao to a week of indentured servitude to Walt.

Over the course of that week, Walt not only works Thao to exhaustion, he also guides the lost boy on the path to full-time employment and the girl of his dreams. But in this tale, Thao's happily-ever-after comes at a steep price as the gang war reaches critical mass. And the role that Walt ultimately plays in the bloodbath is one that no one foresees.

Despite his inescapable fame as "Dirty Harry" Callahan, Gran Torino's Walt Kowalski is a far more evolved and dynamic character, and the story that unfolds around him is so much more meaningful than those of his San Francisco days. Here in a decaying neighborhood in a small Michigan town, Walt Kowalski transitions from a recalcitrant malcontent with no affection for anything or anyone except his Gran Torino and his deceased wife, into a man who ultimately allows himself to love and be loved by a family whose heritage and customs run counter to all that he stands for. And in his transformation, a cast of fictional characters become fully-dimensional people worthy of the same genuine caring concern that they grow to feel for each other in the film.

Gran Torino was filmed on location in the town of Center Line, Michigan, where there is a Hmong immigrant community of significant size. Casting for the film's Hmong characters was held in Center Line, and in other Hmong communities in Minnesota, Michigan, and California; and of the Hmong actors who were cast, only one had any previous film acting experience. However, the title prop, Walt's precious Gran Torino, does have an on-screen history as the car driven by Starsky and Hutch, and was manufactured in the area where the film takes place. And although he was not assigned to combat, Clint Eastwood is a Korean War veteran, and Walt's guns are actual government issue firearms of the same type used in the war.

Although Gran Torino was passed over by the Academy Awards in every category, it was nominated for several film critic awards, a Golden Globe for Best Original Song, and won awards for Best Actor and Best Screenplay by the National Board of Review. Nonetheless, the Gran Torino deserves far more recognition than it got, perhaps even as Clint Eastwood's best work.