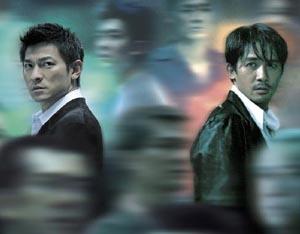 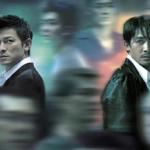 Directed by Wai-Keung Lau and Alan Mak, this turnabout thriller stars Asian heartthrobs Tony Leung and Andy Lau as mutual infiltrators: one an undercover cop deep inside a Hong Kong drug gang, and the other a member of that same gang posing as a rising police bureau official.

Veteran cop Chen Wing Yan has been so deep undercover for the past ten years that no one even knows his identity anymore. And Lau Kin Ming, a lieutenant in Hon Sam's drug-smuggling network, not only passed entry level training in the Hong Kong Police Bureau, he has risen through the ranks to the status of detective. Both sides are aware that there is an infiltrator in their midst, but their identities have been kept so secret that they are unknown to all except each infiltrator's superior, Police Chief Wong Chi Shing and drug lord Hon Sam.

When Sam's drug deals and Chief Wong's drug busts begin to go awry, both Yan and Lau are dispatched to sleuth out their respective infiltrators, each knowing that he himself is the one being sought, yet each still unknown to the other. But it's only a matter of time until things fall apart and the two come face to face.

Known in Chinese as Mou Gaan Do, Infernal Affairs is the same crime thriller that inspired director Martin Scorsese's English-language remake, The Departed, with Leonardo DiCaprio, Matt Damon, Mark Wahlberg, and Jack Nicholson in the roles of their Asian counterparts. And in much the same way that The Departed swept the Academy Awards, Infernal Affairs swept film awards at festivals across Asia.

Infernal Affairs is a taut drama that unfolds within a labyrinth of plot twists and dramatic irony. As the stakes mount, complex characters face excruciating choices in an increasingly futile game, until they are each faced with the ultimate act of self-preservation. Infernal Affairs is one of Hong Kong's best contemporary films, and a must-see before watching The Departed.

Watch the movie - order it from Amazon