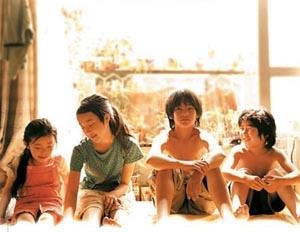 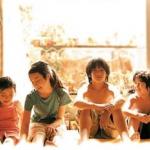 Mothers guard your hearts for this unthinkably tragic tale of four abandoned children left to fend for themselves in a suburban Tokyo apartment. After secretly moving her children into a building where young children are not allowed, mother Keiko Fukushima, a seemingly well-meaning but misguided flibbertigibbet, traipses off to Osaka with the latest in a string of deadbeat boyfriends.

Akira, the eldest, is left in charge of the finances and caring for his younger siblings. Kyoko, the elder girl helps with the cooking and cleaning, while Shigeru and Yuki, the younger boy and girl, are left to entertain themselves. With the exception of Akira, the children have been left with explicit instructions to keep quiet and never to go outdoors for fear that the landlord will discover they're there and evict them. Akira longs to go to school, and Kyoko has dreams of taking piano lessons, but instead, the children pass their interminable days watching television and drawing with crayons.

At first, the Fukushima household remains essentially functional, with the children dutifully going about the daily tasks of cooking, bathing, and doing home-school lessons. But over time, as ennui gradually sets in, the children grow increasingly remiss in their hygiene. The trash and dishes begin to pile up while the laundry and homework go undone. And when the money runs out, Akira must rely on his wits to make ends meet.

His first plan of action is to find a job, but at twelve years old, he's too young to work legally. Next he appeals to his mother's ex-boyfriends. Since he doesn't know where to find his own father or Kyoko's, he tracks down Shigeru's father (a taxi driver) and Yuki's father (a pachinko mechanic) to ask for money. Neither has much to contribute. Fortunately, he manages to stave off starvation when the clerks at a nearby convenience store begin secretly giving him the expired sushi bentos at the back door each day. When the landlady comes calling for the rent, Akira tells her that his mother is away on business. And when the delinquent water and power are shut off, he must resort to bathing and doing laundry at a drinking fountain in a neighborhood park.

As a means of escape from his burdens, Akira starts hanging out at the local video arcade, where he is befriended by a group of school boys his own age. He also finds friendship in Saki, a misfit school girl who takes an interest in his plight. And with Akira's newfound social circle, the younger children, left unsupervised, hear the siren call of the outdoors. Shigeru takes up gardening on the balcony, germinating seeds in Styrofoam noodle cups, and before long, the cooped-up children begin accompanying Akira on his daily ablutions at the park.

Meanwhile, mother Keiko has long since ceased sending letters and money, and the children no longer even have a way to contact her. So when Yuki suffers a serious injury from a fall, Akira is faced with a heart-rending decision that no twelve-year-old should have to make.

Written, directed, and produced by Hirokazu Koreeda, Nobody Knows is an unblinking documentary-style drama that stirred the hearts of audiences at film festivals throughout Japan and beyond. The story is based on a actual events that took place in Sugamo Prefecture, and as senseless and shameful as this film portrays it, the true story was far worse. At well over two hours, the film's pacing is slow and deliberate, yet at no time does it drag. And disturbing though it may be, Nobody Knows is time well spent making a place in your heart for this endearing cast of lost souls.