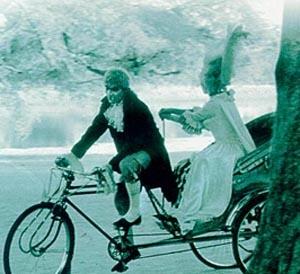 We are all forced to make cuts in the text written for us by destiny. --Geoffrey Kendall as Mr. Tony Buckingham 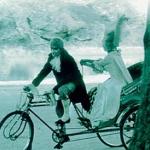 Hard times have befallen the Buckingham family, as they travel from town to town, bringing Shakespeare to the people of India. Preceded only by The Delhi Way, and The Householder, Shakespeare Wallah is among the earliest cinematic works of renowned filmmakers Ishmael Merchant and James Ivory, and its characters are based on and played by real-life father-daughter thespian team, Geoffrey and Felicity Kendall.
While stranded on the roadside with an ailing vehicle, the Buckingham theater troupe is rescued by Sanju, a wealthy Indian playboy, who takes a fancy to the wide-eyed ingenue Lizzy Buckingham. As her father goes begging from schoolhouse to playhouse in search of a venue for their Shakespearean repertoire, Sanju follows the Buckingham family's prop wagon to see Lizzy onstage as Hamlet's troubled Ophelia, Twelfth Night's lost Viola, Othello's tragic Desdemona, and Romeo's fair Juliet. And while Sanju's dalliance with Lizzy's affections eventually evolves into a genuine appreciation and admiration for her sincerity both as a woman, and as an actress, the obligations of his aristocratic stature have bound him instead to Manjula, a famous Indian actress, fetchingly played by the legendary Madhur Jaffrey, whose caste is more befitting a man of Sanju's social status.
In India, the term 'wallah' refers to a tradesman, a kind of suffix or adjunct which identifies and defines one as a member of the working class, providing a particular type of product or service. A 'Shakespeare Wallah' therefore, is one who works in the Shakespearean theatrical trade. A noble profession indeed, but one that still carries the stigma of the working class. And while Lizzy Buckingham may be far better suited to the intellect and longings of the aristocratic Sanju, in polite Indian society, never the twain shall meet.
As a Merchant-Ivory production, Shakespeare Wallah lacks the unctuous charm of A Room With a View,  and the elegant pathos of Remains of the Day, yet it stands on its own as a study in cultural displacement and the spectre of prejudice that so often impedes the path of true love.
* * * * *