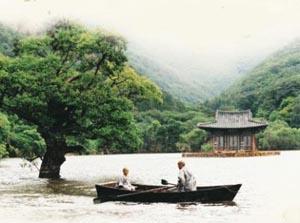 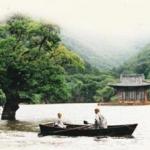 Boys will be boys, even living a monastic life in the middle of a remote lake in Korea. But the childish pranks of one young Buddhist monk gone horribly wrong provide a lifelong lesson as he lives out the seasons of his manhood. Directed by Kim Ki-duk, 'Spring, Summer, Fall, Winter ... and Spring' is a film of such poignant beauty and meaning that it defies description.

The supernal setting is a floating hermitage on Chusanji Lake in Mt. Chuwang National Park in the Republic of Korea's North Kyongsang Province, so isolated that it can only be reached by an ancient wooden rowboat, and so distant from the machinations of human civilization that only the diurnal path of the sun and the change of seasons mark the passage of time.

Old Monk (Yeong-su Oh), keeper of the hermitage, is the master and teacher of its only novitiate, Young Monk (Jong-ho Kim). Their days ebb and flow in a rhythmic routine of meditation, tending to the upkeep of the tiny temple, and ferrying back and forth to the shore to gather herbs on the steep hillsides overlooking the lake. Days, months, even years go by without intrusion from the outside world, until one day, when a mother arrives with her teenaged daughter (Yeo-jin Ha), imploring the Old Monk to heal the young woman of her vague afflictions.

By this time, Young Monk has grown into a handsome young man (Jae-kyeong Seo), with all the typical pubescent stirrings and yearnings, especially since a beautiful nymph has miraculously landed on his doorstep. But with every joy comes the risk of tragedy and loss. And with every transgression comes the opportunity for atonement and redemption.

'Spring, Summer, Fall, Winter ... and Spring' is a film filled with nuance and metaphor: the ancient boat that ferries the monks to and from the shore, the freestanding doors without walls that mark the passage from one room and one world to another, the cast of creatures, both wild and domestic, that each play their subtle role in this pastoral psalm, the stones that are at once the burden and the blessing, and the seasons themselves that represent not a single year, but the phases of a life unfolding.

Casting for this intimate ensemble of players includes the director himself in the role of the Young Monk in the winter of his life, and the crew of talent that brought together musical composer Ji-woong Park, costume designer Min-Hee Kim, and cinematographer Dong-hyeon Baek, has created a paradox of humility and rapture, an unrivaled cinematic masterpiece.

'Spring, Summer, Fall, Winter ... and Spring' is available on DVD at Amazon.com